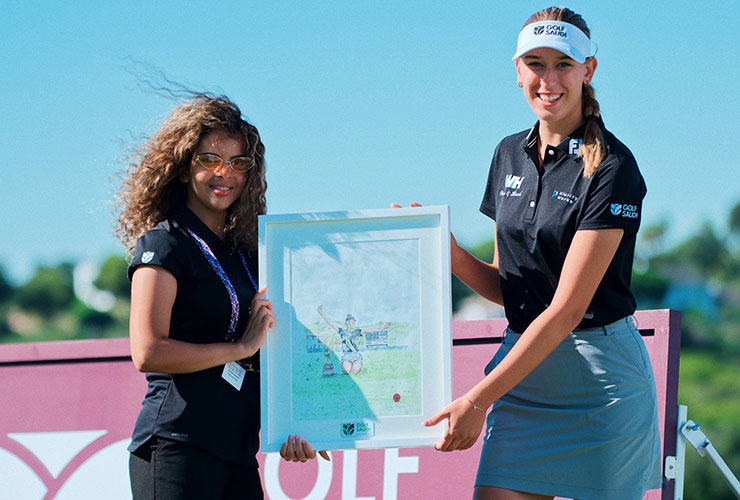 One of the in-form players of the past 12 months, Noja will aid the organisation in its ongoing journey to bring the great game of golf to new audiences, particularly young girls and women across the globe.

Part of her new role will be taking part in on-course lessons and clinics with female amateurs of the game. Chiara will draw upon her own experiences of rising through the amateur ranks and what it takes to become a professional.

“I have always enjoyed fantastic support from the whole team at Golf Saudi, not only via invites to their fantastic events but also in terms of providing advice too,” Noja said. “By turning professional, I have been able to concurrently continue my academic career while still developing and improving as a golfer. I was lucky enough to make my debut on the Ladies European Tour at the end of 2020 and the subsequent 12 months gave me the confidence to turn professional in 2021.”

Noja, a scratch golfer at the age of 11, topped the European Rankings at Under-12 and Under-14 level, maintaining her upward trajectory ever since and currently leads the LAdies European Tour Access Series Order of Merit standings.

“Golf Saudi is doing amazing things for the game whether it’s through their Mass Participation programmes to drive youth engagement and their efforts to draw more people to our sport, particularly young girls and women,” she added. “I am delighted to be confirmed as the latest Golf Saudi ambassador and to not only work alongside so many female superstars from women’s golf but to also support such an ambitious organisation as Golf Saudi. Having come to prominence at a similar time to Golf Saudi, I’d like to think that we’ll be able to share insights mutually and both do our bit in terms of growing the game both in Saudi Arabia and globally.”

Noja, who plays out of Jumeirah Golf Estates in Dubai, has had a stellar first year as a professional, after making the step at just 15 years old in October 2021. She did not miss a single cut at the Dubai Moonlight Classic, Aramco Saudi Ladies International and the Aramco Team Series — Jeddah. Just two months ago in June 2022, Chiara secured her maiden professional victory at the LETAS Amundi Czech Ladies Challenge.

Majed Al-Sorour, the CEO and Deputy Chairman of both Golf Saudi and the Saudi Golf Federation, said: “Chiara immediately impressed me when I saw her play last year in Saudi Arabia. She put in two impressive back-to-back performances at both of our tournaments. To make not only the cut in the Aramco Saudi Ladies International and finish T40 but to do so with a shoulder injury, before following this up with a T26 in the Aramco Team Series belies her talent and bodes very well for both our new partnership and  the future of women’s golf on the Ladies European Tour.

“Having also both lived and played in the Middle East, she has the potential to become a role model for all young girls here in the region and help us with our long-term aims at Golf Saudi of developing the women’s game in the Kingdom.”