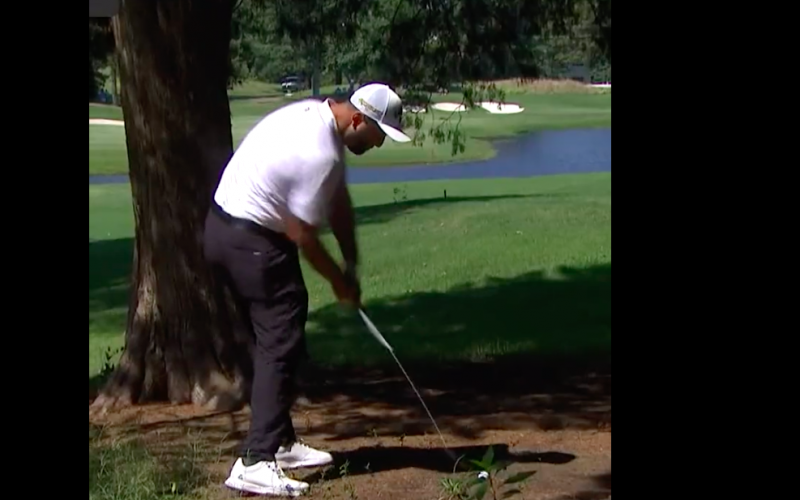 By Shane Ryan
When the PGA Tour app tells you that a player’s first shot on a par-5 ended up in the “dirt outline” that is bad news 100 per cent of the time. Such was the case for Jon Rahm on the third hole at the FedEx St Jude Championship on Friday, when he pushed his tee shot 320 yards dead right, and found himself stuck behind a pair of cedars and in front of a water hazard.

As logical people, we have to conclude that what happened next was not on purpose, but on the other hand … what was he planning? Watch Rahm get out of trouble in a very unique way:

Skipping his way to par 😵@JonRahmPGA skips one over the water and saved par on No. 3. pic.twitter.com/jeUSs5RpI4

Nothing says mastery over nature quite like the skip shot. Where others see the water as a hazard, Rahm used it as a tool, and then managed to save par. Sure, it was almost certainly a fluke, but watching the ball skip over the water is so cool that he deserves to be treated like a king of the four elements. After his round, in passing, we asked Rahm if the shot was intentional. He smiled, continued walking, and gave a faint “no comment.”

Rahm is four-under at the halfway point at TPC Southwind, seven shots off the lead but well within the cut line. He stood at 16th in the FedExCup standings heading into this first leg of the playoffs, and is currently projected to stay well inside the top 30, the cutoff for making the Tour Championship in two weeks.