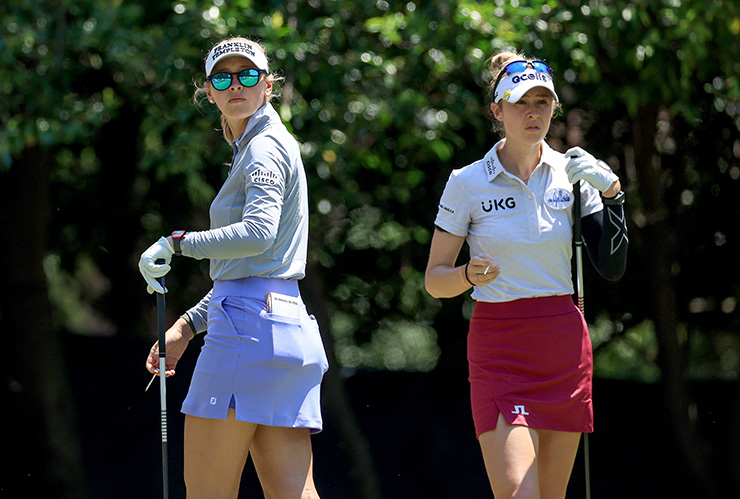 By Matt Smith
American superstar sisters Nelly and Jessica Korda are set for their Spanish debut as they join the field for the for Aramco Team Series — Sotogrande this week.

The third event in the 2022 ATS season sees the players return to La Reserva Club, and the Korda siblings will be joining them for their first ever tournament in Spain.

Having just arrived in the country, World No. 3 Nelly and No. 14 Jessica have yet to get out and about, but plan to squeeze in a bit of sight-seeing along with the business side of affairs.

“I haven’t gotten much time to explore,” said Nelly at the press conference on Tuesday. “Hopefully maybe tomorrow. I’m really excited to kind of explore Spain a little bit since it is our first time here.

“But it’s beautiful. Pretty much all that I’ve seen is the hotel and the golf course. I got to play the front nine yesterday, and it’s really, really nice. Windy, but really nice.”


Nelly just missed out on victory at the ATS event in New York last year, and is eager to get out and enjoy the team format once again.

“I think it’s a super exciting format,” she said. “It’s always really exciting when you kind of get to do something a little different, a little unique. I think it brings in a little bit of new energy.

“I definitely enjoyed my time in New York, and I was really excited to come here to Sotogrande, especially I’ve heard so many great things about Spain and the golf course.

“Every event that I play in I try to play my best and get to the top of the leaderboard. Sometimes it happens; sometimes it doesn’t. But I always try and get there. So it would be nice to get the victory, as it would be any week.”

The Kordas are in town 🇪🇸 pic.twitter.com/NaPbKoAA0E

Jessica herself was the victorious team captain in New York, and she is keen to repeat the experience at the $1 million event.

“It was a lot of fun,” she said. “It’s always fun to see people who really never come out a professional golf event. It was really fun and just so different to what we normally have. It was just such a cool experience. And then playing with a team, it’s just different than what we normally do week in, week out, so like Nelly says, you kind of shake it off a little bit. It’s just really fun to do that. I am excited to be here and have a very cool experience.”

Each team is made up of four players — three professionals and one amateur.

Both Jessica and Nelly are team captains, meaning they get one pick in the draft and are then allotted one random professional and one amateur to make up their quartet for the weekend.

“I think there are more team captains than they were in New York, so there is obviously less players to choose from,” said Jessica before admitting: “I’m not really familiar with some of the players that are on the list, so it’s just something that my caddie and I are going to kind of wing. I think I saw that Nelly and I are choosing -— or Nelly is choosing last and I’m second to last — so probably we’ll have to cross some players off.”

“At the end of the day we just really want to have fun out there and enjoy our time here, because that’s the whole point of this event.

Nelly added: “At the end of the day, you’re always just trying to grow the game of golf, get more people interested, show them it’s super exciting. I think this, the Aramco Team Series does that perfectly.”