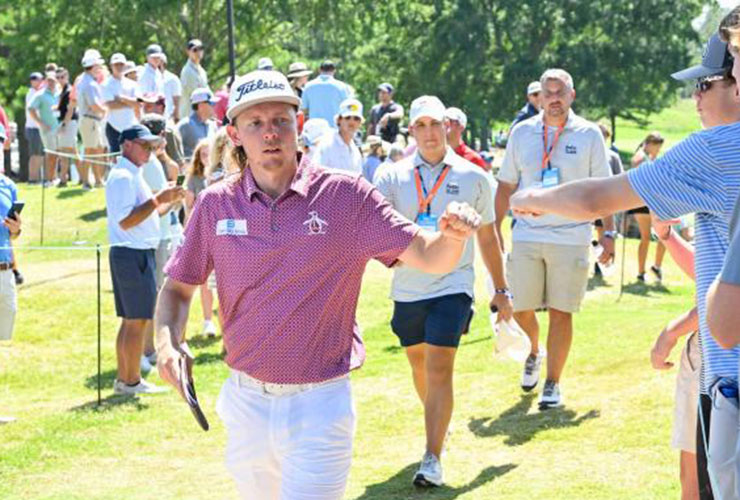 By Shane Ryan
Controversy began Cameron Smith’s week at the FedEx St Jude Championship, when reports that he was headed to LIV Golf after the PGA Tour Playoffs. And controversy ended his week, when rules officials assessed the 28-year-old Aussie a two-stroke penalty before his final round began, pushing him from two strokes further off the lead to four, and significantly hindering his chances to win the event — and become World No. 1 in the process.

Smith was docked two shots for playing his ball from the wrong place on the fourth hole during Saturday’s third round at TPC Southwind. Video replay showed that after hitting his tee shot in the water, he took relief and then played his next shot with his ball touching the red penalty line; the rules state the dropped ball must be out of the penalty area after taking relief.

The application of the rules wasn’t what turned this into a controversy. Rather it was the timing and method in which the penalty was applied that was the source of dispute. The rules committee after watching Smith play in real time on Saturday decided Smith’s drop was OK. But after an official saw the TV broadcast replayed Saturday night, the committee reconvened the next morning and decided to talk to Smith about what happened. In that conversation, Smith acknowledged the ball was on the red line, leaving chief referee Gary Young no choice but to apply the two shots.

Here is the full video of the Cam Smith penalty.pic.twitter.com/CV57DlYRg4

That conversation, however, didn’t happen until around 11.20am local time, less than two hours before Smith’s final round was to begin. With cameras following Smith as he continued preparing to tee off in the third-to-last twosome, his demeanour seemed poised. And an impressive birdie on the first hole made it appear Smith was far from rattled — remember he did overcome a four-shot deficit on Sunday at St Andrews to win the Open Championship last month.

But Smith struggled to get his putter working, making seven pars and then back-to-back bogeys. A late birdie on the 16th hole left him shooting even-par 70 to finish tied for 13th, six back of winner Will Zalatoris.

Smith declined to speak with the press after the round, so it’s unclear his thoughts on what transpired. The tour’s statement indicated that Smith accepted the penalty without much protest. Young described him as “very calm, very matter of fact”, saying that “the rules are the rules”.

What we can say for certain is that Smith missed an opportunity not only to fight his way to the top of the FedEx Cup rankings, but to take over the World No. 1.

What to make of the ruling. Was it fair, even if it was right? Was Smith targeted? We convened a panel of Golf Digest writers to debate the most pressing question that arose from a strange and unfortunate situation. 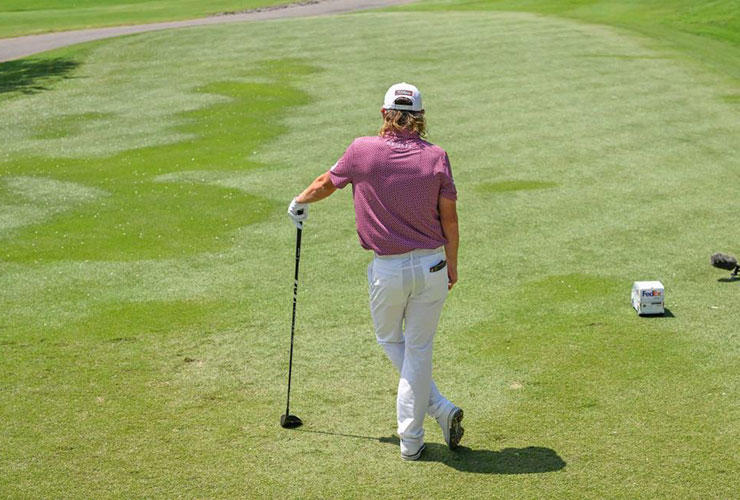 Cameron Smith stands on the first tee box preparing to play in the final round of the FedEx St Jude Championship. Ben Jared

Should Smith have been penalised on Sunday, nearly 18 hours after the fact, for his Saturday violation?

No. Smith did break a rule, but it wasn’t blatant or malicious. The tour and its rules committee marinated on the issue and decided to let it slide. Soon as they made their ruling on Saturday, Smith should have been in the clear. — Joel Beall

The answer here is no, and it has nothing to do with what actually happened on the course. The PGA Tour could benefit from a standard statute of limitations. Beyond that, you risk absurd situations like the one we saw, where Smith gets penalised with only a short while until his final round starts — too late to even change his pairing. We already had uneven enforcement of the Rules in Golf due to the fact that the best players are being filmed more often, and I think a certain degree of that is inevitable and even acceptable. But to carry that disparity forward to the point where some official watching the coverage at 11pm on Saturday night can trigger a review and an extremely late penalty isn’t fair, and it it’s not good for the tournament, the players, or the fans. If you miss it and they “get away” with a penalty, well, welcome to sports. — Shane Ryan

I suppose you always want to see the right ruling, and there are plenty of precedents across both the men’s and women’s game of retroactive penalties. Strictly in that light — strictly — you could argue he should have been penalised. — Dave Shedloski

Does your thought change knowing that the PGA Tour rules committee watched Smith play in real time and in that moment decided there was no penalty?

It doesn’t change my thought that the penalty shouldn’t have been assessed, but it does heighten the absurdity. Here you had a group of people who were aware of the situation, watched it play out, and decided NOT to take action. Then a single guy watching the Golf Channel gets the conversation going again. That feels crazy, and at least makes it look worse. — S.R.

This ruling was ugly. It’s smelly. It shouldn’t have happened. Nothing about it makes golf seem cool. It was correct but it was gross. — Jay Coffin

The problem with this situation is that we had the opportunity to continue to watch it. Long enough to realise that something didn’t quite look right. If a look through a TV monitor was all it took to give you confidence that you had or hadn’t seen something, well, then you haven’t watched enough TMZ. The object of golf, dramatically different than all other sports, is to get the situation fundamentally fair and correct. Fair and correct in 30 seconds is not always going to be the same thing as an hour or two or 18. But right is right is right, however long it takes. — Mike Stachura

Pros don’t get mulligans. Neither should rules officials. — J.B. 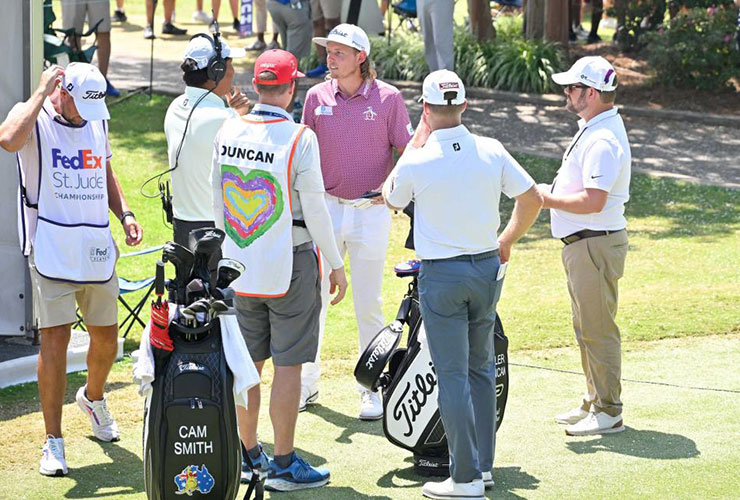 Cameron Smith found out about his two-shot penalty not long before teeing off in the final round. Ben Jared

Should there ever be retroactive penalties or should when a round is over, the score be unchangeable?

Yes, but there should be some sort of limit. Two hours, three hours? Pick an acceptable time and stick with it. If new information is provided one minute too late, then it’s too late. Move on. Look, we, as a game, have got to get a hold of these things. They happen far too often. With all the constant talk about “growing the game” nothing about these goofy, late rules issues does anything to make anyone want to take up our great game. No one saw what happened to Cam and said: “That game seems awesome, I think I want to take it up for the first time tomorrow.” — J.C.

I think you can set a reasonable time after the round to account for situations that are trickier to handle during a player’s round, and to account for the fact that incidents can happen as late as the 18th hole. Again, two hours feels reasonable. More than that does not. — S.R.

My opinion always has been that once all the cards have been signed, that represents that the round is closed. — D.S.

If something egregious is found, committees have the power to disqualify a player. Unless the matter in question falls under that umbrella, no, a score should be considered unchangeable after the card is signed. — J.B.

Did the fact that Smith, given the reports swirling around him about going to LIV Golf, was involved have any influence on the matter?

Does it? Who knows? Should it? Never. Smith’s excellent play put him in the spotlight, not his pending departure. He admitted unequivocally that the ball was on the line. That makes the decision easy and obvious and thoroughly unrelated to who’s paying him millions of dollars to play golf next year. — M.S.

Absolutely not. I don’t think for one second that a rules official was actively watching a replay of the third round and was trying to catch Cam. I firmly believe if it was, say, Adam Schenk, that we’d have had the same end result. There wouldn’t be as big of an overall fuss of course, but it would’ve been the same. You cannot convince me otherwise. — J.C.

I highly doubt this was more than a coincidence that Smith was at the centre of this. It certainly gave me pause for a second or two, and it wasn’t a great look, but the tour’s action was consistent with rulings in the past. — D.S.

Not a chance, and I think the tour is smart enough to understand that even a whiff of any impropriety in that sense would look very bad for them. If anything, I almost wonder if it went the opposite way behind closed doors — if, when presented with this idea of penalizing Smith so late, someone somewhere thought: “Oh no, this is going to be a PR nightmare.” It certainly would have been my thought. — S.R.