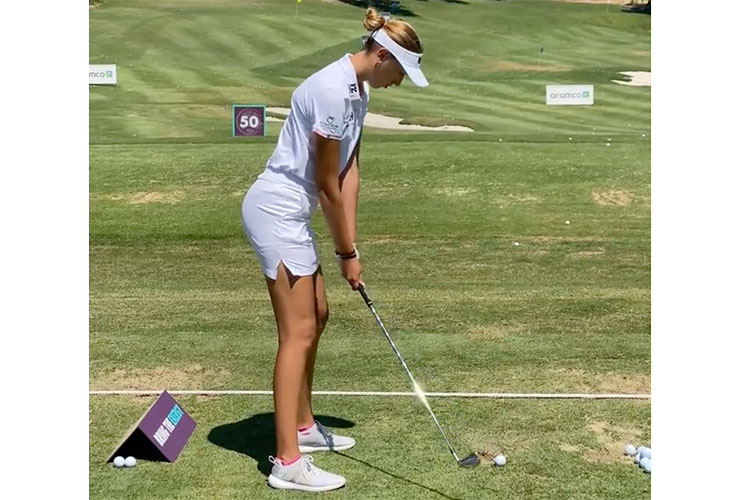 By Matt Smith
Dubai teen star Chiara Noja is raring to go for the Ladies European Tour Aramco Team Series — Sotogrande competition this week at La Reserva in Spain, having discovered her teammates in the draft.

The 16-year-old German, who plays out of Jumeirah Golf Estates in Dubai, was selected by 2021 Sotogrande individual champion Alison Lee at the ceremony on Tuesday evening and will tee it up alongside the 27-year-old American and French star Manon Gidali, who won the 2021 South African Ladies Open.

Noja has hit the headlines this year as she has soared to the top of the Ladies European Tour Access Series Order of Merit rankings in her first year as a pro, with nine top-10 finishes and an outright runaway victory at the Amundi Czech Ladies Challenge.

“Really looking forward to playing on Team Lee,” Noja posted on Twitter along with a video of her practising on the range at La Reserva.

The young team will have their work cut out if they are to taste success this week as a host of big names are in town, including the Korda sisters Nelly and Jessica, Solheim Cup hero Anna Nordqvist, 2022 Aramco London champ Bronte Law, Nanna Koerstz Madsen, Linn Grant, Olivia Cowen and local hero Carlota Ciganda.

Noja’s fellow German Cowan selected Isabella Deilert as her captain’s pick and another Dubai-based star — Czech Kristyna Napoleaova — completes the pro side of her team.

“Isabella is a good friend of mine and she’s playing really well at the moment, so, yeah, she was my first pick so I was really happy she was still available,” said Cowan. “I think it helps when you have a friend on the team that you can just have a good laugh with. When you’re having a good time good golf follows, so think that it’s definitely a key.”

Which team are you backing? 👉