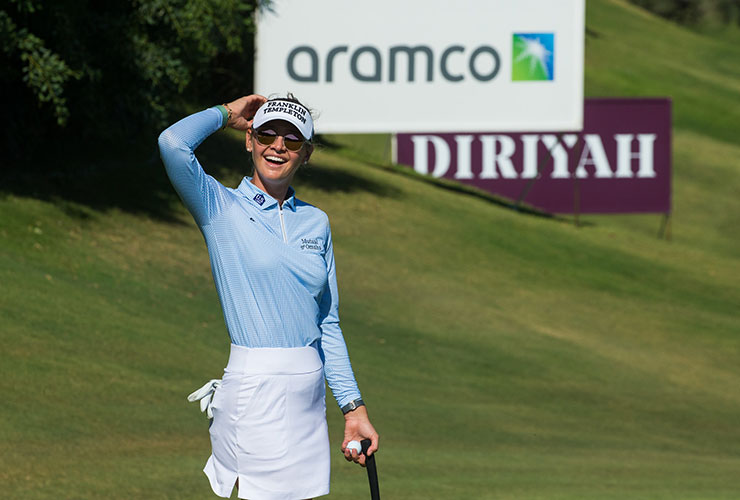 By Matt Smith
It was meant to be a sight-seeing trip to Spain of sorts for the Korda sisters as they played in the country for the first time. The American siblings Nelly and Jessica arrived in Spain to compete in the innovative Ladies European Tour Aramco Team Series — Sotogrande to get a feel for the place ahead of the 2023 Solheim Cup at nearby Finca Cortesín next September.

So even the world Nos. 3 and 14 did not expect to light up La Reserva Club in Cadiz in such spectacular fashion.

Younger sister Nelly was first to hit the front of the pack — sitting seven-under with four to play and one stroke ahead of Belgium’s Manon de Roey. However, a double-bogey seven on the sixth — her 15th — stalled that progress and she had to settle for a five-under 67. 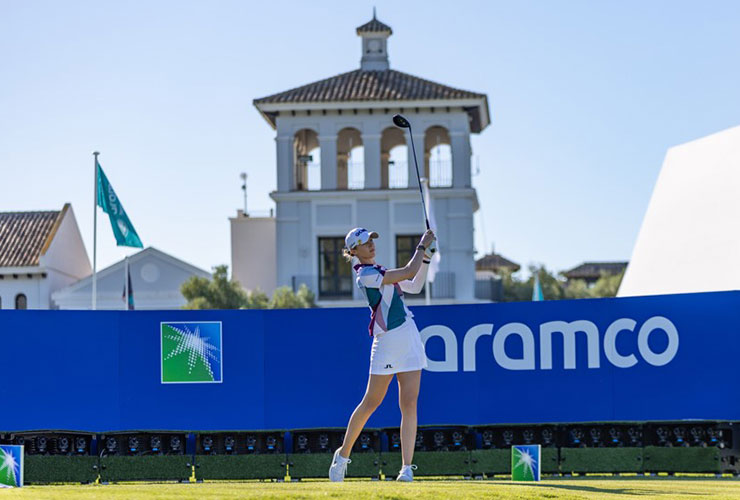 Enter Jessica.
The 29-year-old had an afternoon start and simply carved her way through the field with a course-record 11-under-par 61.

The American went on an amazing scoring spree as she made no fewer than three eagles in smashing the ladies’ course record – and equalling the all-time low round on the LET.

She raced to seven-under inside seven holes with the help of eagles at the par-5 second and sixth holes. The birdies were flowing, too, and the only time she ever came under serious pressure was on the eighth where she visited the water off the tee. But Korda escaped with a bogey before normal service was resumed on the back nine as she collected further gains at the 10th, 11th and 13th.

To cap a stunning round she made a third eagle, rolling home a 15-foot putt at the 16th before closing out with pars to beat the previous course best by four shots.

It equalled the lowest 18-hole score of Korda’s professional career and she as a more-than-comfortable overnight lead of five strokes from De Roey and Pia Babnik.

“It was an awesome round.’ Jessica said. “These rounds are spectacular — you cherish every single one that you have. Just when things go right, they go right. I’ve never made three eagles in a round, so I’m definitely going to remember this one.

“We had a great vibe in the group and so I was really relaxed. It’s probably the first round in about three weeks that wasn’t 20mph winds. That was really nice, just to be able to settle into the golf course. I was just keeping it in play and giving myself opportunities and converting a lot of those. For the last month, I think I just haven’t really been converting any putts and the floodgates opened today.”

Korda was actually suffering with a sore throat during her first-round blitz but joked: “If I was feeling physically good, who knows what would’ve happened — probably over par!”

The Belgian star said: “I just love Aramco events. When you play good as a team — if people support you — it pumps my game as well. I am very happy with my round today. I had a lot of birdies. I couldn’t wish for a better start for the first day.”

Babnik, who won the ATS in Jeddah last November, kept a flawless card in mounting a strong start to the tournament. The Slovenian, 18, said: “I hit many good shots. I’m really happy with my putting today because I made some long putts. Everything came together.”

Nelly and France’s Pauline Roussin are at five-under, while Ana Palaez heads the home challenge after a solid 68.

The competition was hot in the team event with Jessica’s quartet hold a slender lead at 19-under-par. Teams De Roey and Roussin are a stroke back on 18-under-par.

Starring in the Roussin team was 14-year-old Ana Luisa Hernandez. The Madrid teenager, receiving eight strokes, made a pair of twos — one for a net eagle — to really impress her captain.

Roussin said: “Ana played amazing. She hit it far for her age and her size and she had a good short game, very good putting. She helped us out a lot.”

Hernandez added: “It was a really good experience, definitely something I’m never going to forget – I had a great time.”

There is a new format this year for the Aramco Team Series, which launched in 2021. For this season, the teams will compete over only 36 holes — the Thursday and Friday of the tournament — with $500,000 prize-money being split between the lowest scoring fourballs.