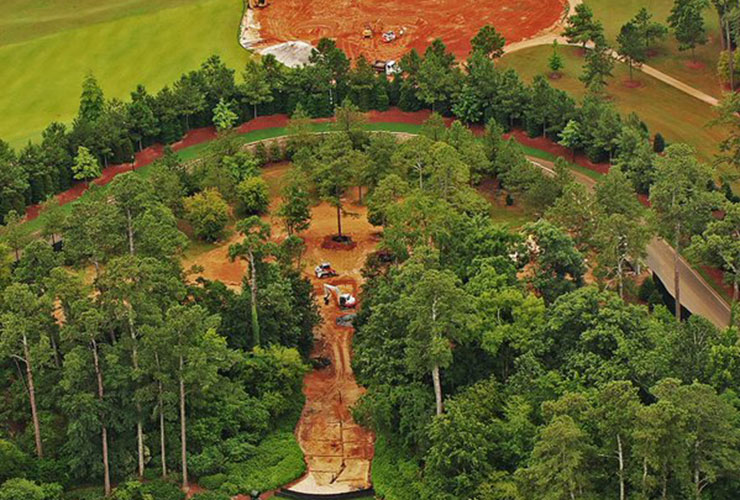 By Stephen Hennessey
The work on one of Augusta National’s most anticipated course changes in years looks to be progressing quite rapidly this summer. Aerial photos taken by Eureka Earth show what appears to be a lengthening of the 13th hole — extending the tee box by perhaps as much as 40 yards — on to land Augusta National purchased from Augusta Country Club in 2017.

Perhaps most interesting is what looks to be underneath the new 13th tee. Detail shots of the teeing grounds show what appear to be the use of a hydronics irrigation system to allow the club to regulate the temperature of the turf. Southern Hills Country Club in Tulsa, Oklahoma, installed a similar system underneath its putting surfaces after a restoration ahead of the 2022 PGA Championship, but as far as we can tell, this is one of the first examples of the system being used to regulate the temperature of a tee box.

Here are the latest photos:

“Perhaps most interesting is what looks to be underneath the new 13th tee. Detail shots of the teeing grounds show what appear to be the use of a hydronics irrigation system to allow the club to regulate the temperature of the turf.” ~ @S_HennesseyGD ⬇️⬇️https://t.co/TGtdwR5kjw pic.twitter.com/Woi38SUM1M

Why would Augusta National want to control the temperature of its teeing grounds? Well, if you have the money, why not, right? But as our architecture editor Derek Duncan explained, the extended 13th tee is being constructed in a low, shady section of the course that might need some help when it comes to irrigation.

The Eureka Earth folks, led by David Dobbins — a Georgia-based flight-school operator who has shared a number of photos of the ultra-exclusive club and home of the Masters on social media — have been chronicling the evolution of the work throughout this summer (see below). With the installation of the hydronics system — essentially a network of hoses used to circulate warm or cold water to control the root zone temperature of the soil — it appears the club’s work is moving at a rapid pace to allow a grow-in period before the winter.

Here’s a look at some other photos shared by Eureka Earth:

“It has been rumoured for years. Now, it looks like Augusta National is finally lengthening its iconic par-5 13th.” ~ Michael McEwan (@MMcEwanGolf) ⬇️⬇️⬇️https://t.co/GaXaMN4ueL pic.twitter.com/rsqZmNJj0e

AKA Presto-chango… Now you see it, and now ya don't 🌲💚⛳️#TheMasters #Masters2023

Augusta National has not commented about any potential course changes, or on the work that is being done currently on its Par-3 Course, although speculation on lengthening the 13th hole has gone on for years. In addressing the media ahead of this year’s Masters in April — before any of this summer’s work had begun — chairman Fred Ridley declined to outline a timeline for when any changes would be taking place.

“That’s something that certainly we have considered and will continue to consider,” Ridley said in his annual pre-tournament press conference.

It’s unknown just how long the 13th hole will play with the new tee box. In 2022, the par 5 measured 510 yards and played to a 4.852 stroke average, which was the third-easiest hole in the tournament. Long regarded as one of the most revered par 5s in golf, the 13th hole has been one of the five easiest holes at every Masters dating back to 1983 (when records are available). If a new tee is used for the 2023 Masters, it would be the most significant change at the 13th hole in modern times, potentially restoring the intrigue of the second shot over the tributary of Rae’s Creek that fronts the putting surface. By pushing the tee back and creating a fairly narrow chute to drive from, players trying to cut the corner on the dogleg left hole will face a bigger challenge.