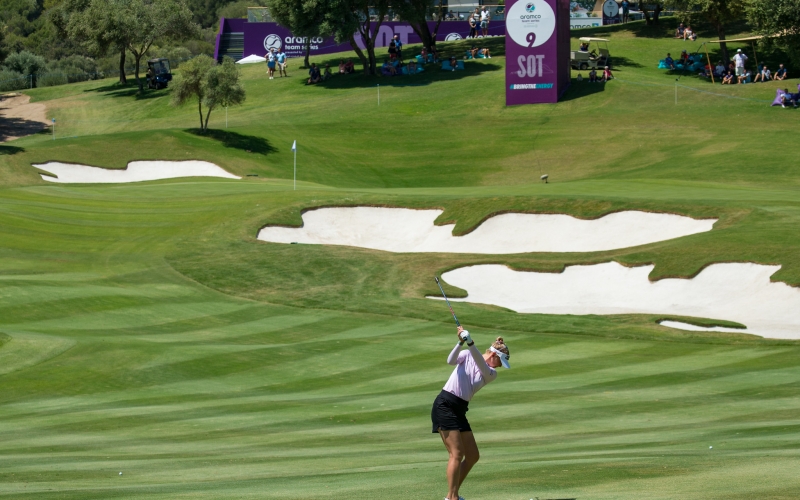 By Matt Smth
Jessica Korda is on something of a roll in Spain as she maintained her push for a historic Aramco Team Series — Sotogrande double thanks to a second-round 68 at La Reserva Club de Sotogrande.

She already has secured one of the two titles on offer, having led her quartet to victory in the team event.

And on Saturday the US star will go in search of individual glory after following up her stunning opening-day 61 with another excellent effort that leaves her at 15-under-par, six clear at the top from Pauline Roussin.

Korda, 29, started day two at the 10th hole and traded a birdie brace for a pair of bogeys as she went out in level-par for the day.

But she regained something of that first-day magic on her back nine, recording four birdies — including three on the spin from the fourth.

It left her in near-complete control of the tournament with just 18 holes left and she was understandably very happy with her position after two days.

“It’s awesome,” said Korda. “I had a really good round yesterday and was able to play well today. What happened yesterday wasn’t even on my mind. Just the way that the golf course was playing, it was not the same at all.

“The wind was up, we played earlier, the turnaround was really short, just a completely different day. It was tough out there to play. I made the turn at even par, which I wasn’t too pleased about but I settled in nicely on the back and made some putts.”

After an early start to her day Korda admitted she was off to catch up on some sleep rather than keep tabs on her afternoon pursuers. When asked if she’d look be looking at the leaderboard, she offered a prompt response — “for my tee-time.”

Korda will be joined in the last group out by Roussin — and also her sister Nelly. The younger Korda made a couple of late gains to get to eight-under, one back from Roussin who signed off with an eight-foot birdie putt at the last.


Roussin — after her 68 — said: “It was a good round and I’m happy I finished with a birdie to finish on a good note, especially putting-wise. It’s golf – anything can happen. I’m just going to keep doing my thing.”

Fourth-placed Palaez heads up the Spanish challenge on seven-under-par after tagging a second-round 69 to her first-day 68. And she certainly has not given up on rising to the summit.

The Malaga golfer said: “I still have 18 holes. Nothing is impossible. Maybe I have my 12-under round, I don’t know…”

Jessica Korda’s quartet won the team event with a 33-under-par total, one better than runners-up led by Roussin.

Korda also captained the winning side in the Aramco Team Series New York last October. In Spain she was partnered by Tereza Melecka, Noora Komulainen and amateur Malcolm Borwick, who is an English international polo star.

Korda said: “I think we just really had a good vibe out there. We tried to keep it as light as possible. Everyone played and contributed. When somebody was out, another person had their back – the beauty of team golf. Malcolm played great. I think he shot the lowest round he’s ever shot today, which is phenomenal. He was just a joy to be around and brought such a positive outlook on everything.”

Borwick, who received four strokes said: “I’ve had an incredible couple of days. I’m going to go back to playing polo. The nerves you get playing tournament golf is aging me as the days go by. But it’s been incredible. Playing with the girls, frankly the level of professionalism and the purity with which they hit the ball consistently is amazing.”

On Satiurday, Korda will aim to create a little piece of history by winning both of the titles on offer at Aramco Team Series event.

There is a new format this year for the Aramco Team Series, which launched in 2021. For this season, the teams will compete over only 36 holes – the Thursday and Friday of the tournament – with $500,000 prize-money being split between the lowest scoring fourballs.

Saturday’s final day of play see only the lowest scoring 60 players and ties from the opening two days return to the course to battle it out for a share of another $500,000, this time in individual earnings.