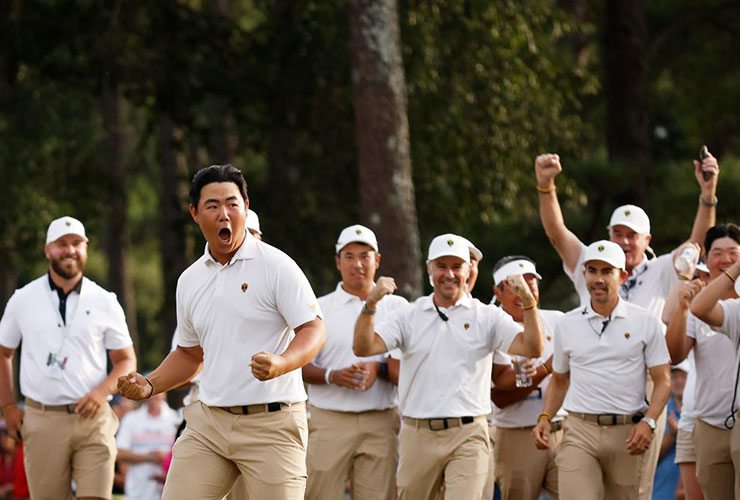 By Jay Coffin
Well, there is International life. After watching the Americans steamroll to a commanding 8-2 lead after the first two days, the International squad won Saturday 5-3 to at least make the red, white and blue work a little harder in the 12 Sunday singles matches.

The US lead overall 11-7 and need only 4.5 points to keep hold of the Presidents Cup. The International team needs 8.5 points.

“I challenged the guys to win the day,” International captain Trevor Immelman said afterward, nearly in tears while beaming with pride.

The morning foursomes session was tied at 2 but the Internationals came storming back in the afternoon to take 3 out of 4 available points in the four-ball session. Tom Kim and Cam Davis came up huge in the final moments on Saturday and willed their respective matches to victories. More about them below.

Of note for the Americans: Patrick Cantlay and Xander Schauffele lost for the first time this week. And World No. 1 Scottie Scheffler still hasn’t recorded a full point.

Here’s everything else you missed in Charlotte on Friday at the Presidents Cup:

There are several candidates for this dubious distinction, but only one on the American side. World No. 1 and PGA Tour Player of the Year Scottie Scheffler has not yet earned a full point. It’s even more difficult to imagine because the US has been on cruise control for most of the week. Scheffler lost his opening match on Thursday, the only American match to lose during the session. His lone half point came Friday and he lost again Saturday morning in a foursomes match with Sam Burns, who Scheffler has paired with each time.
On the International side, Hideki Matsuyama has not played well. There was no shame in joining forces with Adam Scott to lose to Patrick Cantlay and Xander Schauffele in the opening session, but still, as one of the key leaders of the squad, he hasn’t let his golf do much talking. 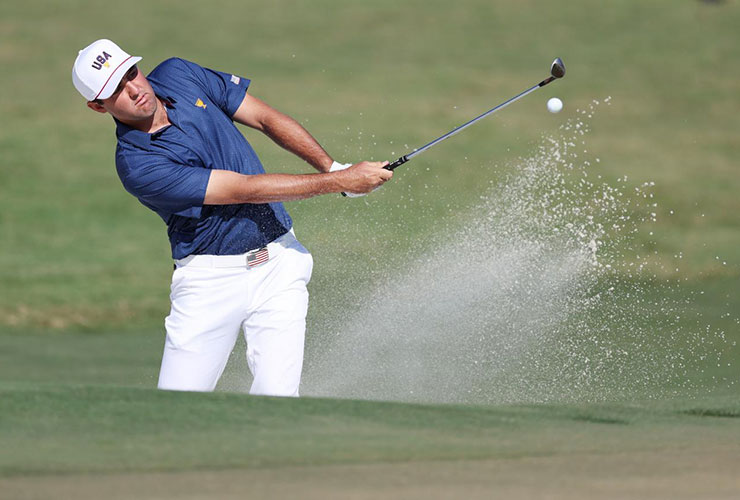 It took until the waning moments of a long day to happen, but the turning point came on the shoulders of 20-year-old Tom Kim on the 18th hole. In the first afternoon four-ball match out with Si Woo Kim against previously undefeated Xander Schauffele and Patrick Cantlay, Tom smoothly carved a 2-iron from 239 yards to 10 feet and drained the birdie putt to win the hole and the match.
The Kims were 2-down after 10 holes and still were able to hand the American duo its first loss together this week. On that final hole, Si Woo was right off the tee and mostly out of the hole. That left Tom to fight solo against Schauffele and Cantlay and from 40 yards farther back in the fairway. Tom hit his approach to 10 feet, Schauffele hit his approach over the back of the green and Cantlay could only get to within 30 feet. Neither made birdie, clearing the stage for Kim to deliver the biggest moment in his young golf career with most of his International team standing just off the green. The ball found the bottom of the cup, he went nuts and celebration erupted. It was a great moment that can be seen below.
“I had my team behind me,” Tom said. “I wanted that putt more than anything in the world.”

TOM KIM FOR THE WIN!

This one is easy. It’s the aforementioned match pitting the Kims against Schauffele and Cantlay. Each member of the foursome hit key shots or made key putts along the way and it was some of the best golf of the entire week. Schauffele drained a 40-foot putt from off the front of the green at 15 to make birdie and go 1-up, but Cantlay missed a short birdie putt on the next hole that would’ve tied the hole. Then Kim put on his cape and provided late heroics.
Honourable mention goes to the final match of the day pitting Aussies Adam Scott and Cam Davis against Billy Horschel and Sam Burns. This match was tight the entire way and the Americans were 1 up after 15 but couldn’t hold on for the win. Davis finished off the match going eagle, birdie, birdie to slam the door shut and give the Internationals a 3-1 session victory. Davis got up and in from 273 yards for eagle on 16, making an 11-footer. He drained birdies from 15 and nine feet on the last two holes. 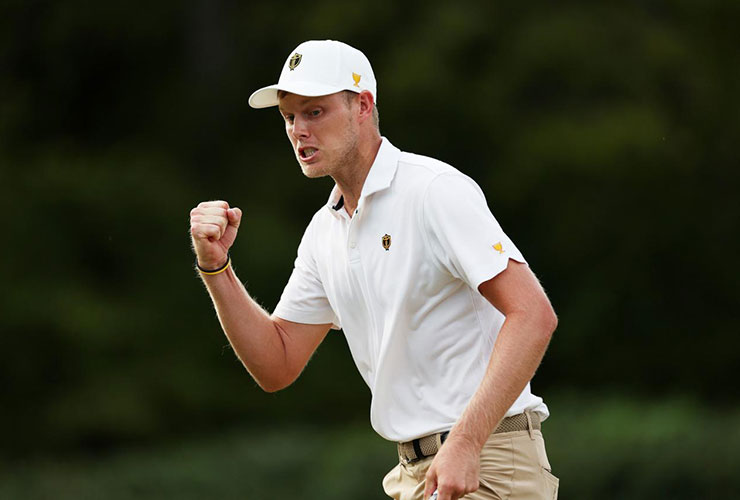 You may also like:
Golf Digest Middle East presents Oktoberfest 2022
Hojgaard hangs on to lead in France
Immelman ‘LOLs’ at Norman message
US dominate Internationals on Day 2 of Presidents Cup
LPGA announce new event hosted by Michelle WIe
Reed to line up with LIV Golfers at Alfred Dunhill Championship
Hsieh becomes youngest player to make cut on tour
Monahan tight-lipped on LIV Golf rankings quest
Tiger helps out at Presidents Cup
Perez brings the LIV party to Asia
Key moments from Day 1 at Presidents Cup
Should the Presidents Cup bring in the LPGA players
Justin Thomas is a hard ‘no’ on PGA Tour v LIV Golf
Greg Norman shut out of Shootout
Adam Scott on why he shunned LIV Golf
LOOK: The latest LIV Golf standings after Chicago
Five ways to improve the Presidents Cup
Every player at the 2022 Presidents Cup ranked and rated
Davis Love finds his voice — thanks to LIV
WATCH: LIV Golf highlights from Chicago
WATCH: Willett’s three-putt to lose Fortinet
Pay day in Chicago: Who won what at LIV Golf?
Loud and proud crowd the difference at Presidents Cup
WATCH: Bryson gets in a tangle at  Chicago LIV event
Laklalech becomes first Arab to win on LET
Chiara Noja secures LET card for 2023
Get your FREE September edition of Golf Digest Middle East here