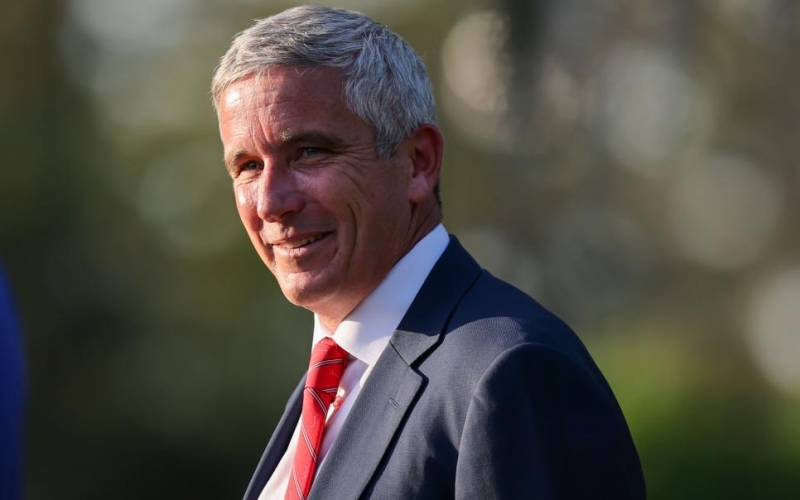 By Matt Smith
Jay Monahan has distanced himself from discussions regarding LIV Golf’s quest to gain world ranking points.

The PGA Tour commissioner sits on the Official World Golf Ranking (OWGR) board that will ultimately decide if and when LIV Golf will begin to earn points, like the existing PGA, DP World and Asian Tours. Following the latest event in Chicago, LIV Golf members wrote to OWGR chairman Peter Dawson to urge him to give the circuit world ranking status.

However, Monahan chose not to speak on the matter

“I think as it relates to world ranking points and LIV, that’s a matter for the Official World Golf Ranking board,” Monahan told Sky Sports. “I’m not in a position to comment on their application.

“Any questions you have with their application, they’re best served answering them.

However, he did add: “I think the criteria is well established. It has been in place for a long period of time and has served this game exceedingly well. At this point, I haven’t engaged those conversations.”

You may also like:
Golf Digest Middle East presents Oktoberfest 2022
Tiger helps out at Presidents Cup
Perez brings the LIV party to Asia
Key moments from Day 1 at Presidents Cup
Should the Presidents Cup bring in the LPGA players
Justin Thomas is a hard ‘no’ on PGA Tour v LIV Golf
Greg Norman shut out of Shootout
Adam Scott on why he shunned LIV Golf
LOOK: The latest LIV Golf standings after Chicago
Five ways to improve the Presidents Cup
Every player at the 2022 Presidents Cup ranked and rated
Davis Love finds his voice — thanks to LIV
WATCH: LIV Golf highlights from Chicago
WATCH: Willett’s three-putt to lose Fortinet
Pay day in Chicago: Who won what at LIV Golf?
Loud and proud crowd the difference at Presidents Cup
WATCH: Bryson gets in a tangle at  Chicago LIV event
Laklalech becomes first Arab to win on LET
Chiara Noja secures LET card for 2023
Get your FREE September edition of Golf Digest Middle East here