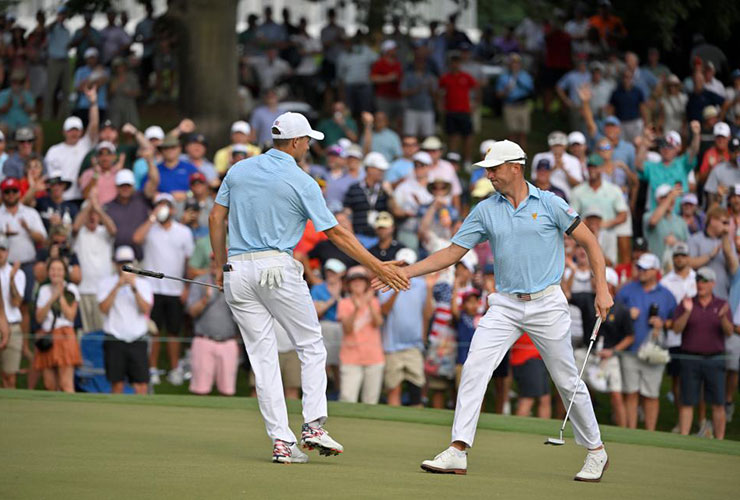 By Shane Ryan
Europe is the only continent in the world whose citizens can’t participate in the Presidents Cup, and that’s a shame, because the word that best describes the action on ​Day 1 in Quail Hollow comes to us from France, via Italy: Carnage.

The team rosters looked uneven before the week, the actual match-ups looked nightmarish for the Internationals on Wednesday night and on Thursday the outcome was somehow even worse than expected. By day’s end, Davis Love III’s Americans had taken a 4-1 lead in this race to 15.5 points that is not technically insurmountable, but is, nevertheless, pretty much insurmountable. Underdogs win by going up big early and surviving the comeback, not by coming back themselves, and that goes doubly for underdogs playing on the road. When asked what his team could do to fight back on Friday, International captain Trevor Immelman almost seemed resigned.

“We have no other choice,” he said. “We’re going to keep fighting. It’s what we do. It’s the type of mentality that this team has. So, you know, we’ll regroup.”

And yet, the word “carnage” might not be totally fair. Despite the final margin, the International team managed to fight admirably on the back nine after taking several near-knockout punches in the first two hours, and there were times — right up until the day’s final putt—when it seemed as though the final margin might be at least slightly closer. What follows are seven of the biggest moments from a dominant Thursday by the Americans.

The lingering memory here will be Pendrith missing a 10-footer to halve his match against Tony Finau and Max Homa, but the truth is that Pendrith was the better player in his anchor pairing with Pereira. Just two holes later, he buried what felt like a do-or-die 24-footer to halve the 16th hole and keep the match all square, and it was Pereira whose errant driver on 16 and 18 made things tough on the Internationals in a very winnable match. The final drive was the real killer; Pereira hooked his tee shot on the last, and it was all Pendrith could do to blast from the rough 205 yards into the greenside bunker. As Homa and Finau made a standard par, Pereira scrambled to 10 feet, but Pendrith couldn’t make the putt. It was the difference between a 3.5-1.5 margin and the more dire 4-1. Pendrith didn’t speak to the media, but Finau praised his partner Homa for two clutch drives on 16 and 18.

Love was grateful for the point, knowing how precarious the situation was at the end of the day.

“It looked red all day,” he said, “but it was always — somebody came on the radio and said, yeah, but we’re 1-up in three matches and those can flip real quick.”

2. Adam Scott can’t stem the tide as the flagship goes down 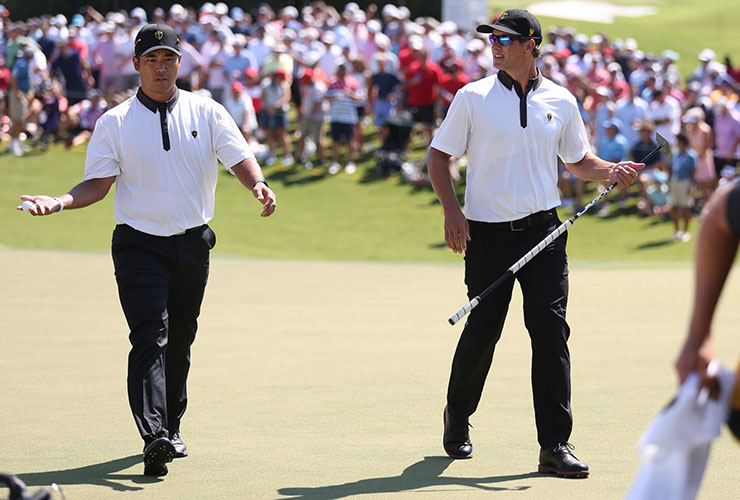 Just as they did in their opening match of the Ryder Cup against Rory McIlroy and Ian Poulter, Patrick Cantlay and Xander Schauffele took the fight to the Internationals early and often. By going 4-up after seven holes on Adam Scott and Hideki Matsuyama in the lead spot — Trevor Immelman’s flagship pairing — they took the steam out of the International team before anyone could catch their breaths … largely on the strength of Cantlay’s hot putter. But then Matsuyama made a nine-footer to bring it to 3-down on eight, they halved the ninth, and after Matsuyama’s brilliant 203-yard tee shot to six feet on the par-3 10th, Scott had a chance to cut the margin to 2-down and introduce real nerves into their opponents. Instead, he pushed it past and the Americans held on to their lead.

“We got lucky there on 10,” Schauffele admitted afterward. “That could have been a big one, but they missed. We kind of used that to give us some momentum to finish off this match.”

From there, Schauffele and Cantlay won the next three holes for a decisive 6&5 victory — Scott in particular fell apart — and improved their gaudy record in team foursomes to 5-0.

As the day wound to a close, an optimistic fan could still talk himself into a 2.5-2.5 tie for the Internationals; that’s how tight the final three matches were. In the third match, Collin Morikawa hit one of his extremely rare mediocre approach shots to 25 feet on the par-4 17th, it seemed at the very least that the Internationals would be able to extend the match to the 18th hole. Instead, Young hit one of his most aggressive putts of the day … right into the bottom of the cup.

“I definitely hit it a little bit too hard,” Young said. “It is a really fast one, and it’s obvious that it’s really fast. But the greens are so, so quick. And there’s so much slope that it’s very easy, I think, to hit something hard enough to go four, five, or six feet by. It doesn’t necessarily really have to be a bad putt. But fortunately it didn’t do that.”

We already knew Morikawa was the best iron player in golf — see his second, first, and third-place finishes in SG/approach on the PGA Tour the last three years — but he almost outdid himself on Thursday. There’s a reason he’s won two majors at a very young age, but this week, there was another beneficiary, and Cam Young enjoyed it plenty.

“Having Collin as a partner definitely takes some pressure off me,” he said, “because I feel like especially if I can just get it in the fairway, I’m going to have an eight or ten footer for birdie.”
That scenario played out over and over, and it was enough to beat their very solid Korean opponents.

Time and again, golf’s two most famous friends managed to rescue one another from incredibly tight squeezes, starting on the par-3 fourth when Thomas hit his tee shot on the 168-yard hole about 125 yards, and Spieth bailed him out with a pitch to inside three feet. The most important moment, though, came when Thomas returned the favor on the 15th. Spieth faced an incredibly long putt and ran it 26 feet past the hole. Clinging to a 1-up lead, Thomas did this:

Conners, who had a seven-footer for par that he thought could win the hole, suddenly needed it to halve the hole. When he missed, suddenly the Americans were 2-up with three to play, rather than all square.

“It was huge,” Thomas said. “You know, we joked it looked like a 4 the entire way after the tee shot, the second shot, the putt. That’s just the crazy and fun part about match play. If that was stroke play, the people we were playing with would be like oh, wow, what a crazy par. But then all of a sudden they have a putt to tie the hole and completely flip the match.”

FIRED UP 🔥 @JustinThomas34 with a clutch putt to go 2-up with 3 to lead @PresidentsCup. pic.twitter.com/BwYgzV36di

It was mostly bad news for the Internationals, but not exclusively bad news. Facing the World No. 1 in Scottie Scheffler and his good friend Sam Burns, Si Woo Kim felt the nerves on the first hole, but it wasn’t long until those nerves were replaced by anger.

“To me, when we announced our name first hole, I was a little shaking leg,” he jokes. “I don’t have experience much. And, yeah, kept going through 5, 6, I’m getting (annoyed) because I’m losing, you know.”

In fact, he and Cam Davis fell 3-down after seven holes, and against Scheffler, arguably the best match golfer in the world the past two years, that nearly seemed like lights out. But the Internationals battled, and though they couldn’t buy a putt, they got a break when the Americans made double bogey on 15, reducing the deficit to 1-down. On the very next hole, Kim connected, hitting his 10-footer to square the match, and set up his partner for further heroics.

When Davis, the Aussie rookie, found himself on the fringe 60 feet from the hole after the massive turnaround mentioned above, he knew that a successful shot would, at worst, halve the match, and at best give the Internationals their first (and, as it turned out, only) point. The Americans sat 11 feet from the hole, needing it for par. Davis never considered anything but the putter.

“The fringes are so perfectly cut out here, it’s almost rolling like a green anyway,” Davis said. “So I just saw it as though I was on the green. I took the flag out and treated it like a 50, 60-foot putt … it was just a simple, long, uphill, slightly right-to-left 60-footer with the match on the line. It came off great. I left him with an uphill putt, which is always good. So it was perfect.”

The lag stopped two feet from the hole, leaving Kim a simple two-footer that would likely have been conceded in any other scenario. When Scheffler missed the par putt for the Americans, Kim cleaned up and the Internationals had a much-needed point.

That lone point will be cold comfort to the Internationals, who are facing a huge deficit on the road to a superior team, but it’s also not nothing. At the very least, it’s an oasis among the carnage, and something the Internationals will need a lot more of on Friday to make this event remotely competitive.