Presidents Cup 2022: Everything you need to know about Day 2 at Quail Hollow 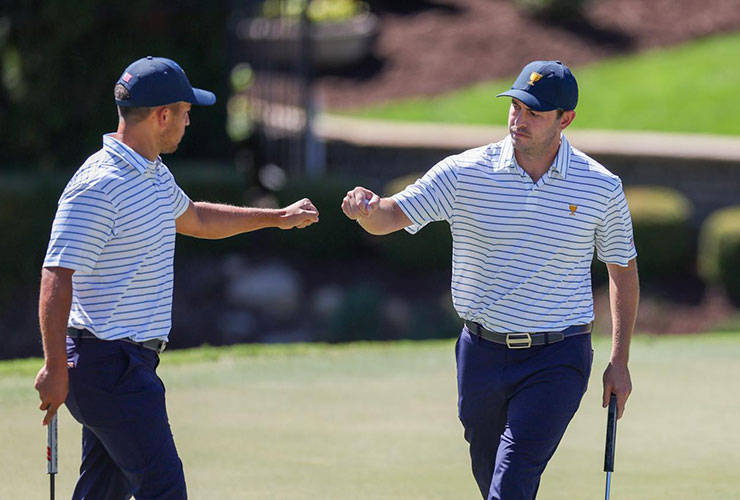 By Christopher Powers
Prior to this 2022 Presidents Cup, the question of whetherthe International team could pull off the upset seemed to fall in the pipedream category. The real question should have been — even if the International team played its absolute best golf, would it be enough to even put up a fight?

Unfortunately for golf fans and for broadcasters, the answer appears to be a resounding no. On Friday at Quail Hollow, Trevor Immelman’s squad grinded its way to … wait for it … one point, an identical output to Thursday’s matches. Heading into Saturday, the road team trail 8-2, which was the exact score after Friday in 2017 at Liberty National, where the US went on to win 19-11.

At this point, the International side might sign for 19-11. This thing could get ugly, like significantly uglier than it already is, which is a shame given how well the likes of Sungjae Im and Cam Davis have played. Taylor Pendrith, the last man selected to the International roster, has been fantastic in his rookie debut. What he has to show for it is consecutive losses of 1-down. A long birdie conversion on the final hole wasn’t even enough to grab a halve, as American rookie Max Homa promptly poured in his birdie try not long after to halve the hole and win the match.

Here’s everything else you missed in Charlotte on Friday at the Presidents Cup:

For the International team to have had any chance of an upset this week, they would have needed A+ performances from their two veterans, Hideki Matsuyama and Adam Scott. They have instead gotten F- performances out of both, which was a real killer on Thursday when they played together in the opening match and got trounced by the formidable team of Patrick Cantlay and Xander Schauffele, 6&5. Immelman smartly split them up on Friday, Scott going out first with fellow countryman Cam Davis and Matsuyama going out fourth with 20-year-old Tom Kim. It didn’t work, though in fairness to Scott and Matsuyama, nobody is beating Patrick Cantlay and Xander Schauffele (Kim and Matsuyama’s opponent) this week, and you might be able to say the same for Justin Thomas and Jordan Spieth, who Scott and Cantlay put up a decent fight against. Davis shined, making four birdies and cutting the deficit to 2-down with two to play, but Spieth slammed the door with a long birdie conversion at the 17th. Even if Scott and Matsuyama conjure up some magic on the weekend, it will likely be too late. 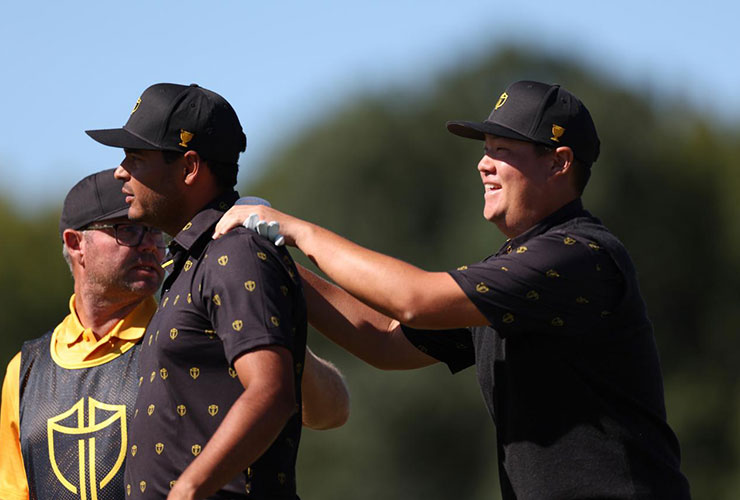 With Spieth and Thomas making a bunch of noise ahead, Sungjae Im and Sebastián Muñoz slowly began to turn their match against Scottie Scheffler and Sam Burns back in their favour. They appeared to completely flip it at the par-3 14th, where Im chipped in for a birdie and let out a huge fist pump, likely assuming it was enough to square the match. Scheffler then proceeded to pour in his 10-footer to upstage Im, picking up a crucial halve and keeping the momentum on their side. Im and Muñoz did eventually claw out a half point, but had that hole gone differently they may have got the full point, and full points are the only thing that could even make this a contest.

Not to sound harsh, but there is none. The aforementioned Im and Muñoz shot nine-under best ball and they were pretty fortunate to halve the match. Matsuyama and Scott are nowhere to be found. Si Woo Kim, who was a part of the only winning duo on Thursday, for some reason sat Friday. It sure feels like the final outcome is understood.

It was clearly the Im/Muñoz v Scheffler/Burns match, but since we already devoted some real estate to that, we’ll give a special shoutout to the end of the Homa/Horschel v Conners/Pendrith match. Key phrase: end of. This thing was a pillow fight for much of the day and then Homa caught absolute fire and Horschel made a handful of clutch putts, too. It was Homa who finished the job, though, hitting his approach shot on the 17th hole to 13 feet and making the putt to take a 1-up lead to the 18th tee. Then, after finding the fairway, Homa’s 200-yard approach came to rest 11 feet from the cup, and after Pendrith made a bomb for birdie that sent the International team into a frenzy, Homa buried his anyway to win the match. It was, by far, the most animated Homa’s ever been on the golf course, and it brought his record to 2-0-0 on the week. The rising PGA Tour star has now become a rising team event star overnight.

You may also like:
Golf Digest Middle East presents Oktoberfest 2022
Reed to line up with LIV Golfers at Alfred Dunhill Championship
Hsieh becomes youngest player to make cut on tour
Monahan tight-lipped on LIV Golf rankings quest
Tiger helps out at Presidents Cup
Perez brings the LIV party to Asia
Key moments from Day 1 at Presidents Cup
Should the Presidents Cup bring in the LPGA players
Justin Thomas is a hard ‘no’ on PGA Tour v LIV Golf
Greg Norman shut out of Shootout
Adam Scott on why he shunned LIV Golf
LOOK: The latest LIV Golf standings after Chicago
Five ways to improve the Presidents Cup
Every player at the 2022 Presidents Cup ranked and rated
Davis Love finds his voice — thanks to LIV
WATCH: LIV Golf highlights from Chicago
WATCH: Willett’s three-putt to lose Fortinet
Pay day in Chicago: Who won what at LIV Golf?
Loud and proud crowd the difference at Presidents Cup
WATCH: Bryson gets in a tangle at  Chicago LIV event
Laklalech becomes first Arab to win on LET
Chiara Noja secures LET card for 2023
Get your FREE September edition of Golf Digest Middle East here