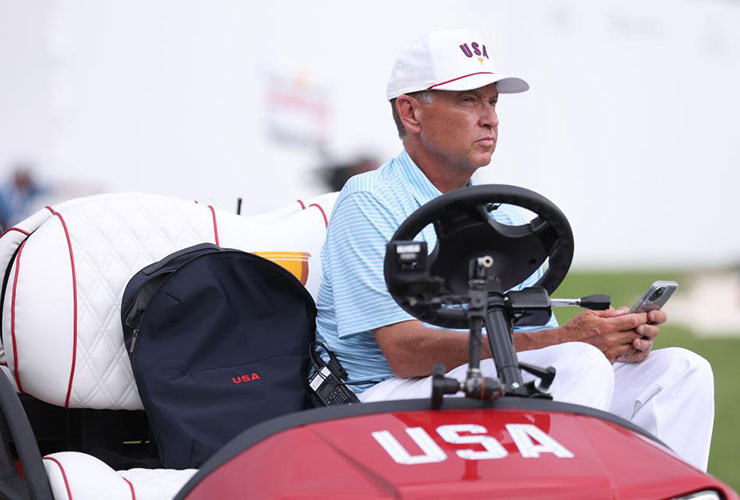 By Dave Shedloski
While lingering on the sixth tee Thursday afternoon at Quail Hollow Club and with his US Presidents Cup team taking control early against an inexperienced International squad, Davis Love III had a few idle minutes and decided to dial up his honorary assistant captain. Of course, Tiger Woods took the call.

Woods, who as playing captain in 2019 led the American team to a comeback victory at Royal Melbourne in Australia, has been an integral contributor to Love’s team, even as he had to turn down an opportunity to be an official part of it. The 15-time major champion continues to work on rehabbing his badly injured right leg from the one-car accident he was involved in 19 months ago in Los Angeles. But that hasn’t stopped him from talking to prospective US team members and being supportive.

“I was standing on the sixth tee for like an hour … a long time, so I called him,” Love said on Thursday after his team won four of five foursomes matches to begin the 14th Presidents Cup. “I said, ‘Well at least you’re watching everything on TV. Call us if you see anything.’

“He’s having fun. He obviously misses it.”

Love didn’t divulge what observations Woods, 46, might have offered. He made it clear that Woods likely would be in attendance this week were it not for his physical limitations that prevented him from playing more than a few major tournaments this year.

“The other night on a Zoom call, Fred [Couples, an assistant captain], said to him: ‘When are you getting in?’ And Tiger said: ‘What did you say? I can’t hear you.’ He wishes he were here,” Love said. “You know, it’s not easy, banging around on a golf cart or walking up and down hills. I get it. But we’re including him.”

You may also like:
Golf Digest Middle East presents Oktoberfest 2022
Perez brings the LIV party to Asia
Key moments from Day 1 at Presidents Cup
Should the Presidents Cup bring in the LPGA players
Justin Thomas is a hard ‘no’ on PGA Tour v LIV Golf
Greg Norman shut out of Shootout
Adam Scott on why he shunned LIV Golf
LOOK: The latest LIV Golf standings after Chicago
Five ways to improve the Presidents Cup
Every player at the 2022 Presidents Cup ranked and rated
Davis Love finds his voice — thanks to LIV
WATCH: LIV Golf highlights from Chicago
WATCH: Willett’s three-putt to lose Fortinet
Pay day in Chicago: Who won what at LIV Golf?
Loud and proud crowd the difference at Presidents Cup
WATCH: Bryson gets in a tangle at  Chicago LIV event
Laklalech becomes first Arab to win on LET
Chiara Noja secures LET card for 2023
Get your FREE September edition of Golf Digest Middle East here