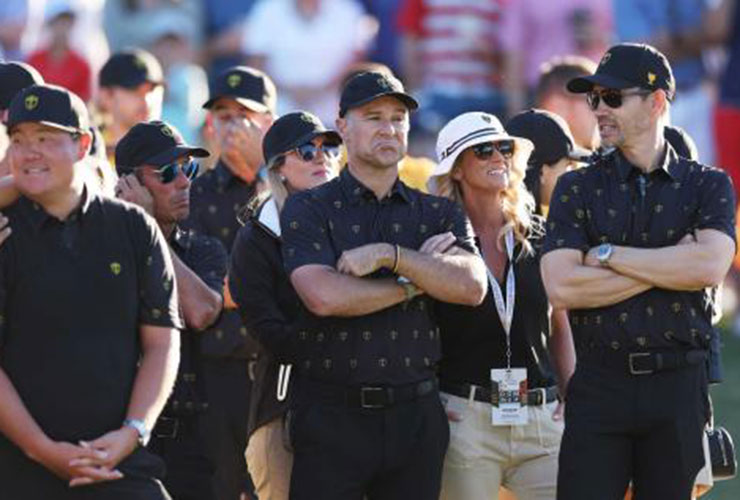 Matt Smith
With the depleted International team facing another Presidents Cup thrashing at the hands of the US at Quail Hollow this weekend, visiting captain Trevor Immelman allowed himself a chuckle after receiving well-wishes from LIV Golf CEO Greg Norman.

The rest-of-the-world side are 8-2 down after the opening two days, and are struggling as LIV Golf players are ineligible to compete in the PGA Tour-ran Presidents Cup due to a ban.

Players absent include Australian Open Champion Cameron Smith and Norman tweeted a good-luck message to the Internationals, with Immelman replying with a simple: “LOL.”

Outside of all this angst – golf is golf, competition is competition; something every golfer thrives on. As a former player & Captain of the International Team, I wish @TrevorImmelman & his entire team the very best in repeating our only 1998 @PresidentsCup success in Melbourne. pic.twitter.com/iwdELJpHfE

The International team has only beaten the US once in 13 previous Presidents Cups, with Norman leading them to their only victory in 1998.

“Outside of all this angst, golf is golf, competition is competition; something every golfer thrives on,” he wrote on Twitter.

“As a former player and captain of the International Team, I wish Trevor Immelman and his entire team the very best in repeating our only 1998 Presidents Cup success in Melbourne.”

Immelman added in response: “I’m an extremely open and honest person. I pretty much say it exactly as I’m thinking it. What I said was exactly what I was doing when I read that tweet. I was laughing out loud.”

You may also like:
Golf Digest Middle East presents Oktoberfest 2022
US dominate Internationals on Day 2 of Presidents Cup
LPGA announce new event hosted by Michelle WIe
Reed to line up with LIV Golfers at Alfred Dunhill Championship
Hsieh becomes youngest player to make cut on tour
Monahan tight-lipped on LIV Golf rankings quest
Tiger helps out at Presidents Cup
Perez brings the LIV party to Asia
Key moments from Day 1 at Presidents Cup
Should the Presidents Cup bring in the LPGA players
Justin Thomas is a hard ‘no’ on PGA Tour v LIV Golf
Greg Norman shut out of Shootout
Adam Scott on why he shunned LIV Golf
LOOK: The latest LIV Golf standings after Chicago
Five ways to improve the Presidents Cup
Every player at the 2022 Presidents Cup ranked and rated
Davis Love finds his voice — thanks to LIV
WATCH: LIV Golf highlights from Chicago
WATCH: Willett’s three-putt to lose Fortinet
Pay day in Chicago: Who won what at LIV Golf?
Loud and proud crowd the difference at Presidents Cup
WATCH: Bryson gets in a tangle at  Chicago LIV event
Laklalech becomes first Arab to win on LET
Chiara Noja secures LET card for 2023
Get your FREE September edition of Golf Digest Middle East here