Presidents Cup 2022: Home-course advantage is more important than ever in team match play. But is that a good thing? By Shane Ryan
It’s possible to drum up a few different reasons for why home-course advantage seems to be so critical in the modern era of team match play — the Ryder Cup and Presidents Cup, most prominently — and all of them are valid. Minimal travel for the home side, control of the course in the Ryder Cup and stylistic familiarity all matter, a little. There’s one element, however, that matters a lot, and that’s the presence of tens of thousands of screaming fans, a few of them extremely rude, and a handful of them possible even dangerous, all hell-bent on making the life of the visiting team miserable.

This is a tried-and-true formula even in team sports where the athletes are used to the atmospheric abuse and come in prepared to handle it. In golf, where it’s an anomalous experience that happens little more than once a year, it’s devastatingly effective. When we talk about home-course advantage, then, it’s important to remember this fact from the very start — nothing matters more than the fans. It’s not even close.

Strange as it might sound, the type of fans we see at these events — rabid, loud — are a relatively recent development. For a long time in the history of the Ryder Cup, American fans were abidingly polite to both teams, and even when things got spicy in Great Britain, you never really heard about it because there was no TV coverage and the American teams were too talented by comparison for it to matter. Things started changing in 1985, the first home Ryder Cup of Tony Jacklin’s tenure, when the European fans at The Belfry in England had begun to sense that their team had a real shot to win and responded accordingly. The book “Us Against Them”, a Ryder Cup oral history by Robin McMillan, has some great quotes from the Americans that year indicating just how shocked they were by the change.

“When I would miss a putt, people would cheer,” Peter Jacobsen said. “And I thought: ‘You know, you’re not supposed to do that.’ But Lanny Wadkins said to me, ‘Get used to it. These people want us to lose.’”

Curtis Strange was even more shaken: “They were rooting like hell for their own team and didn’t give a rat’s about you. So that was an eye-opener, too.”

It sounds almost quaint now, knowing what we know about modern Ryder Cup crowds, but at the time it was almost scandalous to the Americans. When the Europeans won that Cup, some of the Americans were so appalled that they threatened not to play again.

“British golf fans have always had a reputation for fairness and appreciation of the game,” Hal Sutton said. “But none of our guys saw any of that this week. Their behaviour was disgraceful. I was verbally abused, and if this is British sportsmanship, then it is a sad day for golf. I don’t need the money. I play golf because I enjoy it. If the crowds ever get like this in America, I wouldn’t hit another ball.”

You could argue that almost three decades of American dysfunction began at The Belfry. At the next Ryder Cup, at Muirfield Village in the US, home captain Jack Nicklaus was incredibly frustrated that the American fans were not at all partisan. They hadn’t got the memo, and despite his best efforts (Nicklaus even bought them all miniature flags), they were still the same polite bunch who applauded shots from both teams. Only when 1991 came around, and Dave Stockton, the US captain, brought a military theme to the Cup that became known as “The War By the Shore”, had the American fans caught on. Since then, like clockwork, the European players and their families complain every Ryder Cup about the surly US crowds. The narrative never fails. (Americans seem to criticise the European fans a little less, but it still happens.) 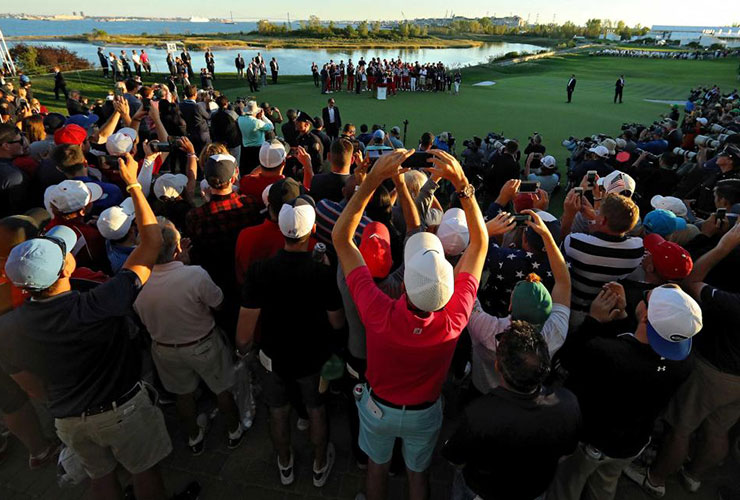 Fans take pictures of the American team celebrating its win in 2017 at Liberty National. Patrick Smith

The fact that it’s such a recurring storyline tells you most of what you need to know; the rabid crowds affect the players more than anything else. It’s the biggest reason why we’re in the era of massive home-course advantage, with seven of the last eight Ryder Cups going to the home team in a blowout. It’s similar in the Presidents Cup, though the American talent advantage obscures it; the Internationals have been two points or less away from winning last two home Cups, while the Americans have continued to destroy them when playing stateside.

When you add in a few modern ancillary elements, such as both teams working with statistical analysts who can maximize advantages like course set-up and line-up construction, the advantage is more exaggerated than ever before.

The Presidents Cup is, of course, quite different from the Ryder Cup in the sense that it has less history and therefore less associated fan passion … to the point that through some circumstance or another, there were various Australian and Asian fans pretending to be American fans in Melbourne just three years ago. Still, once you got past the bizarre fake partisans, the Australians were passionate for their team, they raged against Patrick Reed to no end (or at least to the end that his caddie got in a fight with a fan), and there were plenty of fans from other countries (especially South Africa) to cheer on their team.

As for the Americans, the crowds have been fine at home Presidents Cups, and only need the competition to get a bit more intense in order to step up their game. For now, though, the fan culture that does exist is plenty to provide a home-course advantage in an individual sport where any concerted efforts to intimidate the other team are more surprising and disturbing for their rarity. 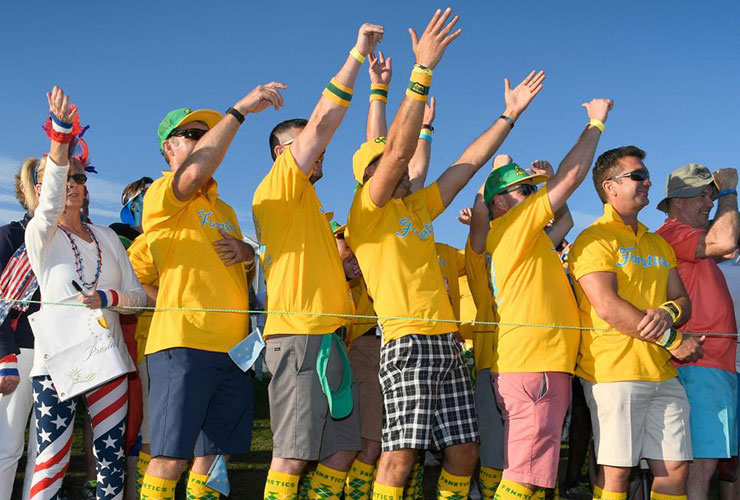 Trying to unify fans for the International Presidents Cup team is a challenge given all the various countries represented, but a group called the Fantastics has tried to lead the charge. Stan Badz

Now, as for the question of whether any of this is a “good thing”. Well, it’s tempting to say that it doesn’t matter. For instance, let’s pretend that we agree home-course advantage matters a little too much. What steps would you take to redress the issue? Move to a neutral venue? Limit the number of spectators? Those things are never going to happen, and while you could theoretically take smaller steps, like removing the ability of Ryder Cup captains to manipulate the course (this is already a non-issue in the Presidents Cup, where the PGA Tour controls the course), the effect will be minimal.

The simple fact is that when fans care a lot about a sporting outcome, it becomes very difficult for a visiting team to play in front of those fans. Whether that’s bad or good is largely irrelevant; it’s how it is, and probably how it should be. In those rare cases when golf veers from a sport of lonely combatants into the realm of team play, victory on the road must be earned through grit and resilience, just like every other sport.