Shootout shut-out: Greg Norman says he was asked not to attend PGA Tour event he founded 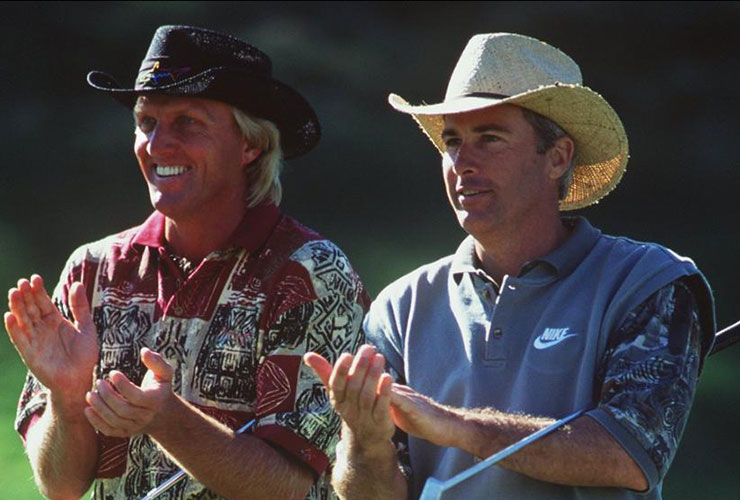 Greg Norman and Curtis Strange are shown during the 1994 Shark Shootout at Sherwood Country Club in California. The event eventually moved to Florida and became the QBE Shootout. Gary Newkirk

By Evin Priest
Despite creating the event more than 30 years ago, LIV Golf chief executive Greg Norman says he has been asked not to attend this year’s QBE Shootout in Naples, Florida.

The two-time major winner and head of the new series took to social media on Tuesday with a lengthy post detailing that he won’t be at the two-player team tournament, slated for December 7-11 at Tiburon Golf Club.

Norman, 67, did not specify who asked him to skip the event, formerly known as the Shark Shootout, which he created in 1989. The PGA Tour, which includes it on its schedule as an unofficial tournament, did not immediately respond to comment when contacted on Tuesday.

“Sadly, after 33 consecutive years of playing in and hosting every Shootout tournament — a co-sanctioned PGA Tour event — since I founded it in 1989, this year I have been asked not to attend,” Norman wrote in an Instagram post.

PGA Tour players who move to LIV Golf trigger a ban as soon as they compete in a LIV event.

“In some people’s mind this is too disruptive and evolution is perceived as a bad thing,” Norman wrote. “Change is good. Evolution and innovation of the professional golf product has been needed for decades — just ask the next generation of golf fans.”

QBE Shootout tournament director Rob Hartman told the Naples Daily News that the decision for Norman not to attend was mutual. “As we got close, ultimately the decision was made that he was going to step back and really let the focus remain on our tremendous charitable partners,” Hartman said. “When he started this event 34 years ago, it was all about charity then, and it’s all about charity now. Greg just made the decision that he didn’t want anything to distract from that.”

It comes nine weeks after Norman, who won the Open Championship in 1986 and 1993, was asked by the R&A not to attend a celebration of past champions at the 150th Open at St Andrews. The four-hole Monday event was attended by past Open winners, including Tiger Woods, Lee Trevino and Rory McIlroy. Norman called the decision “petty.”

You may also like:
Golf Digest Middle East presents Oktoberfest 2022
Adam Scott on why he shunned LIV Golf
LOOK: The latest LIV Golf standings after Chicago
Five ways to improve the Presidents Cup
Every player at the 2022 Presidents Cup ranked and rated
Davis Love finds his voice — thanks to LIV
WATCH: LIV Golf highlights from Chicago
WATCH: Willett’s three-putt to lose Fortinet
Pay day in Chicago: Who won what at LIV Golf?
Loud and proud crowd the difference at Presidents Cup
WATCH: Bryson gets in a tangle at  Chicago LIV event
Laklalech becomes first Arab to win on LET
Chiara Noja secures LET card for 2023
Get your FREE September edition of Golf Digest Middle East here