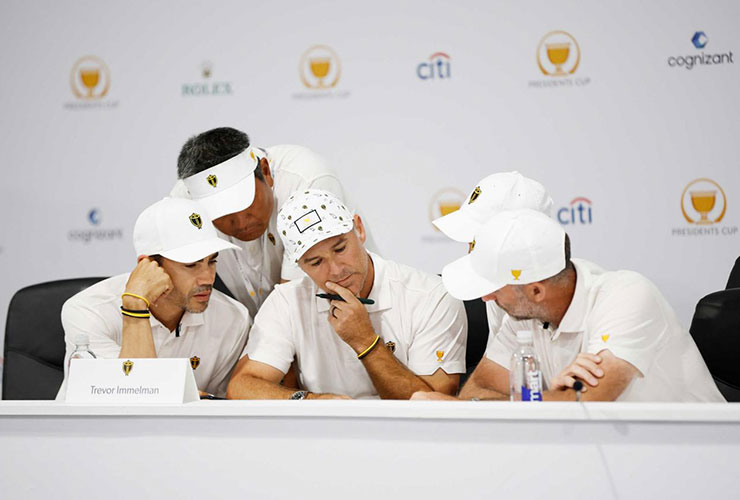 By Shane Ryan
Writers, delete your leads. On an afternoon when the Americans seemed certain to close out the Presidents Cup, the International team staged an unlikely late rally, highlighted by heroics from Tom Kim and Cam Davis, to turn a rout into something more intriguing. The 11-7 score falls into that mythical four-point deficit zone that produced such unforgettable Ryder Cup comebacks at Brookline in 1999 and Medinah in 2012, when the winning team trailed 10-6 heading into Sunday. It’s not likely that we’ll see an American collapse, or an International “Quail Mary,” but now, at the very least, it’s possible.

That makes Sunday all the more exciting, and the stakes were obvious as the captains made their selections by how long each pick took — Trevor Immelman and Davis Love III used as much time as they could to deliberate with their assistants, receiving a one-minute warning on several occasions. Here are the 12 matches on the slate for the finale of the 14th Presidents Cup, starting just after 12 noon eastern at Quail Hollow.

12.02pm — Si Woo Kim (INT) v Justin Thomas (USA)
Tom Kim and Justin Thomas were both asked in their respective press conferences if they would like to face each other — Kim was diplomatic, while Thomas gave a “bring it on” answer. In the end, Thomas drew another Korean, and it was his captain’s decision. When Immelman led with Si Woo, Love came back with Thomas and was probably going to send him out regardless. Thomas’ 4-0 heroics with Spieth are well documented, but Si Woo has been quietly impressive in his own right, going 2-1 and playing clutch golf down the stretch in his win against Schauffele and Cantlay Saturday afternoon. This may not be the opening match of dreams, but it’s good enough.

12.14pm — Cam Davis (INT) v Jordan Spieth (USA)
Here Immelman was deciding who to match against Spieth, and after an incredibly long deliberation, he gave Davis an immense vote of confidence by calling his number. Davis has played all four sessions, going 2-2, and made his biggest impact in Saturday’s final match, when he made birdie on the final three holes to stun Billy Horschel and Sam Burns. He faced Spieth already, losing in Friday fourball, and he’ll have to contend with one of the hottest putters on either team — Justin Thomas joked that playing with Spieth on Saturday, he picked up his marker more than he actually attempted a putt.

12.26pm — Hideki Matsuyama (INT) v Sam Burns (USA)
It’s been a disappointing Presidents Cup for both players, Burns at 0-3-1 (he’s played well, but been victim of some tricky matches) and Matsuyama at 1-3, and both will be dealing with some fatigue, having played in every session. This is the definition of opportunity — the drama will still be high when their match goes out, and one player will have the opportunity to leave the weekend with a happy parting memory.

12.38pm — Adam Scott (INT) v Patrick Cantlay (USA)
Scott’s Presidents Cup singles record is 6-5-4 — better than his rough pairs records — but he lost a crucial match to Xander Schauffele in 2019 when the International team tried to hold onto their lead in Melbourne. Now he’ll play Schauffele’s best bud and frequent partner, Cantlay, who finished 2-1 in pairs and is 2-0 in team event singles competitions, with wins against Joaquin Niemann in the 2019 Presidents Cup and Shane Lowry last autumn at the Ryder Cup. You could say this about many of the matches here at the start, but this feels like a must-win for Scott.

12.50pm — Sebastian Munoz (INT) v Scottie Scheffler (USA)
The No. 1 player in the world has had a rough Presidents Cup, to the point that Love held him out on Saturday afternoon four-balls. Though he’s struggled, Scheffler is still the same man that made the finals of the 2021 WGC-Match Play, won it in 2022 and beat Jon Rahm head-to-head in the last year’s Ryder Cup. In other words, when it’s time to play singles, there aren’t many better. Munoz has acquitted himself beautifully in just two sessions, with a tie and a win, but this will be the rookie’s biggest challenge yet.

1.02pm — Taylor Pendrith (INT) v Tony Finau (USA)
It’ll be bomb central for these two, who also met in Thursday foursomes. That match went to Finau and was the first of three losses for Pendrith. At 0-3, it’s an incredibly tall task for him to go against Finau in the sixth spot, but it’s worth remembering that he made an enormous putt on the 18th green that would have tied an earlier match if Max Homa hadn’t followed with the match-winner moments later. Pendrith has guts, and while Finau has many big wins in his match-play career, Ian Poulter proved at Whistling Straits that he can be vulnerable in singles. Pendrith isn’t exactly Poulter, but he’ll have to channel something similar on Sunday.

1.14pm — Corey Conners (INT) v Xander Schauffele (USA)
On paper, this is the most lopsided match of the session. Conners has been woeful (particularly with the putter), Schauffele has been strong and no one in their right minds would expect this to go to the Internationals. But Conners can take solace in the fact that match play is a strange animal, and bizarre things can occasionally happen.

1.26pm — Sungjae Im (INT) v Cameron Young (USA)
Young’s massive putt on the 17th hole to win his Thursday foursomes match was followed by a tie and a loss in two more sessions for the Presidents Cup rookie. Im has played all four sessions and finally earned a win Saturday afternoon. This is a tremendous match-up of young players (literally and figuratively) who will contend at the game’s biggest events for years to come. Young, in particular, could have a chance to score the winning point for Team USA.

1.38pm — KH Lee (INT) v Billy Horschel (USA)
Lee and Horschel are both 1-1 through the first two days in their Presidents Cup debuts, and they were slotted by their captains in the ninth spot, which could become critically important. Horschel will need to use the energy he felt on Friday to take the fight to Lee, who will be trying to make a good Ryder Cup for the Korean contingent even better.

1.50pm — Tom Kim (INT) v Max Homa (USA)
It seems very strange that Immelman held Tom back for the end of the line-up, particularly given how extravagantly complimentary he was towards him in his press conference Saturday night. All he would say in that regard was “we’re running our system”. Then again, you could almost say the same about Homa, who finished his pairs sessions 3-0 and has been a star for the US. Whether these were good decisions or bad, it did give us the marquee match of Sunday singles. It would be a massive shame if it didn’t matter.

2.02pm — Mito Pereira (INT) v Collin Morikawa (USA)
Morikawa has been strangely quiet at this Presidents Cup; if you had predicted that the Whistling Straits star would only play two of the first four sessions, you would have been laughed at. But after one win and one loss in the morning, he was benched for both afternoon sessions. Pereira, for his part, sat out all day Saturday. This isn’t the most exciting match-up on paper, but if the Cup is not decided by the time this gets to the back nine, the drama will be there regardless.

2.14pm — Christiaan Bezuidenhout (INT) v Kevin Kisner (USA)
If the Internationals hope to win, it’s a safe bet that they’ll need the very last match, and the bad news is that Bezuidenhout, like Pereira, sat out the entire day on Saturday. The good news is that when he got a chance on Friday, he got a half point, which is better than losing before being consigned to the bench. Kisner is one of the most decorated match-play golfers America has and has done most of his damage in the one-on-one format; Bezuidenhout will be longer, but Kisner relishes the job of frustrating bigger hitters.

You may also like:
Golf Digest Middle East presents Oktoberfest 2022
Stenson shunned by Sweden
All you need to know from Day 3 at Presidents Cup
Hojgaard hangs on to lead in France
Immelman ‘LOLs’ at Norman message
US dominate Internationals on Day 2 of Presidents Cup
LPGA announce new event hosted by Michelle WIe
Reed to line up with LIV Golfers at Alfred Dunhill Championship
Hsieh becomes youngest player to make cut on tour
Monahan tight-lipped on LIV Golf rankings quest
Tiger helps out at Presidents Cup
Perez brings the LIV party to Asia
Key moments from Day 1 at Presidents Cup
Should the Presidents Cup bring in the LPGA players
Justin Thomas is a hard ‘no’ on PGA Tour v LIV Golf
Greg Norman shut out of Shootout
Adam Scott on why he shunned LIV Golf
LOOK: The latest LIV Golf standings after Chicago
Five ways to improve the Presidents Cup
Every player at the 2022 Presidents Cup ranked and rated
Davis Love finds his voice — thanks to LIV
WATCH: LIV Golf highlights from Chicago
WATCH: Willett’s three-putt to lose Fortinet
Pay day in Chicago: Who won what at LIV Golf?
Loud and proud crowd the difference at Presidents Cup
WATCH: Bryson gets in a tangle at  Chicago LIV event
Laklalech becomes first Arab to win on LET
Chiara Noja secures LET card for 2023
Get your FREE September edition of Golf Digest Middle East here