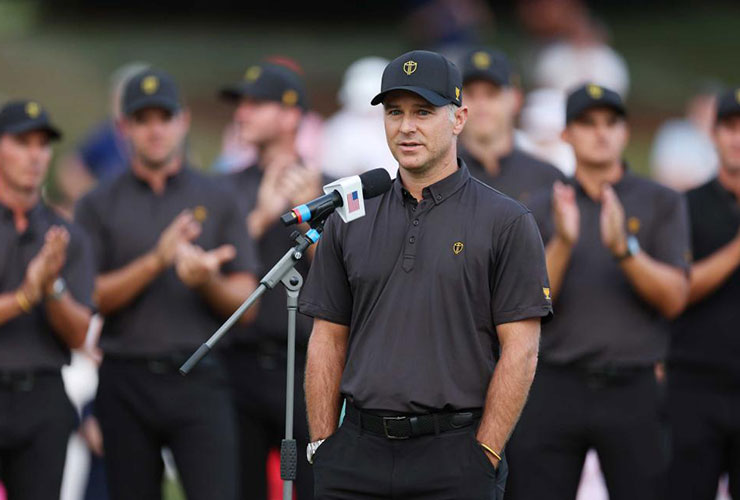 By Evin Priest
Trevor Immelman has dealt with a few headaches in the two-and-a-half years since being picked to captain the International team in the Presidents Cup.

First there was the COVID-19 pandemic, which pushed back the entire event a full year. Then there was the emergence of LIV Golf and the uncertainty around whether potential team members would move to the circuit and make them ineligible to play at Quail Hollow. The team’s talent level was dealt a substantial blow when Cameron Smith, Joaquin Niemann and Abraham Ancer joined the rival league. Smith, who ranked first among the automatic qualifiers for the International team, was a particularly devastating considering he outstanding debut in the event at Royal Melbourne in 2020, and his victories this year at the Sentry Tournament of Champions, Players Championship and Open Championship at St Andrews.

Toss in the general sniping about the International team’s chances this week — in media reports and even more loudly on social media — and it’s understandable, then, that 2008 Masters champion Immelman took aim at critics Sunday night after the Internationals mounted a hearty comeback, pushing the star-studded American team until late in the day before the home side officially claimed the Cup clinching point

“We showed a lot of guts to fight back,” Immelman said in the post-Cup press conference after their 17.5-12.5 defeat. “At some point this afternoon, I thought there was still a chance. And when you consider that we were 8-2 down on Friday evening, this team is no joke, and I’m sick and tired of it being spoken of as a joke. We love this event, and we love our team, and we cannot wait to run this back and have another shot.”

Assistant captain Mike Weir, the only Canadian in history to win the Masters (2003), said the International team would consider small tweaks to the rest-of-the-world side before the Cup heads to his native Canada in 2024. Weir is expected to be the captain at Royal Montreal. But he stopped short of any talk that there would be consideration for LIV golfers and how they could qualify for the Internationals.

“I don’t think there’s anything we can do about [LIV],” Weir said. “I think we have a great core here, and we’ll be discussing ways to continue to make our team better and continue to evolve.”

Adam Scott, who made a record 10th appearance for the Internationals at Quail Hollow, said the team had cemented their new identity after 2019 captain Ernie Els rebranded the team with a unified logo and took steps to unify the group. The 2013 Masters winner said the US would be in for a fight at the 2024 Cup.

“This team’s got plenty of heart, and that’s thanks to everything Trevor’s put in the last couple years,” Scott said. “He’s bled for this [International team] shield that we now talk about, and it’s just the beginning for this team. I think you’re seeing a lot of guys here who will be returning on the next one. I think the US team’s really going to be in for a helluva fight.”