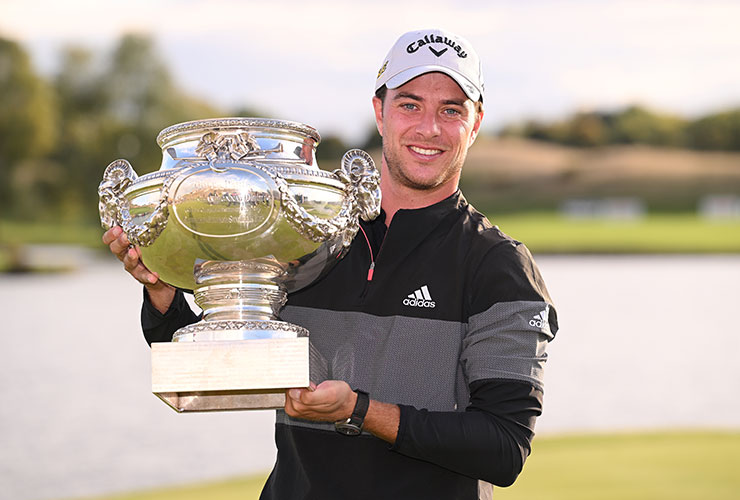 By Matt Smith
Guido Migliozzi took a high-stakes risk on the final hole to claim a sensational victory in the DP World Tour French Open at Le Golf National outside Paris. The Italian provided one of the most incredible moments of the 2022 season, making a stunning birdie on the 18th.

The 25-year-old was in great form all day, making nine birdies — including five in a row from the sixth — without a single dropped shot at the 2018 Ryder Cup venue.

He saved the best until last when, tied for the lead and staring down an 18th hole which statistically counted as one of the most difficult par fours in the Tour’s history, Migliozzi cut a courageous faded five-iron into the final green which came within inches of finding the cup for an incredible eagle two.

He knocked in the five-foot putt for the first of only two birdies at the final hole all day, equalling the course record of 62 for a 16-under, and becoming just the second Italian winner of the event after Costantino Rocca in 1993.

Rasmus Hojgaard, who had led the tournament after each of the opening three rounds, finished a shot back on 15-under par after a three-under 68, while Paul Barjon shared third place with Thomas Pieters and George Coetzee on 11-under.

“From 2019 it’s been a long, long road to here,” said Migliozzi. “I played very, very solid last year and went very close to a win. I was looking for it. This season has been weird. I’ve had a lot of expectation from me. I was playing great tournaments, majors, Masters. My plan was very high but I was just not playing great. Then I started to practise in another way and I’ve worked really hard and here I am now holding a trophy and it’s beautiful.

“My main goal was to have a great tournament, have a good week, just keep my tour card and work hard to get into the final tournaments. I was just in a good vibe on the course. I was enjoying my golf and it was a beautiful day. My girlfriend was with me and my coach as well. I was just enjoying everything. And today golf gave back to me something. It was one of those days that was beautiful to live.

“The shot at the 18th was something incredible. I went for it and it paid off. My caddy was not happy. It was not the real strategy but I felt I could try.”

Højgaard added: “Obviously there’s a lot of good stuff out there. it was a few silly mistakes over the last two days that cost me the win this week, but I’m happy with where my golf is heading towards. I’m striking the ball good and I’m putting nice. I’ve enjoyed it this week.

“I just have to take the positives from this week. It obviously stings a little bit at the moment but later tonight I’ll be looking back and I’ve got a lot to be proud of.”

You may also like:
Golf Digest Middle East presents Oktoberfest 2022
Stenson shunned by Sweden
All you need to know from Day 3 at Presidents Cup
Hojgaard hangs on to lead in France
Immelman ‘LOLs’ at Norman message
US dominate Internationals on Day 2 of Presidents Cup
LPGA announce new event hosted by Michelle WIe
Reed to line up with LIV Golfers at Alfred Dunhill Championship
Hsieh becomes youngest player to make cut on tour
Monahan tight-lipped on LIV Golf rankings quest
Tiger helps out at Presidents Cup
Perez brings the LIV party to Asia
Key moments from Day 1 at Presidents Cup
Should the Presidents Cup bring in the LPGA players
Justin Thomas is a hard ‘no’ on PGA Tour v LIV Golf
Greg Norman shut out of Shootout
Adam Scott on why he shunned LIV Golf
LOOK: The latest LIV Golf standings after Chicago
Five ways to improve the Presidents Cup
WATCH: LIV Golf highlights from Chicago
Laklalech becomes first Arab to win on LET
Chiara Noja secures LET card for 2023
Get your FREE September edition of Golf Digest Middle East here