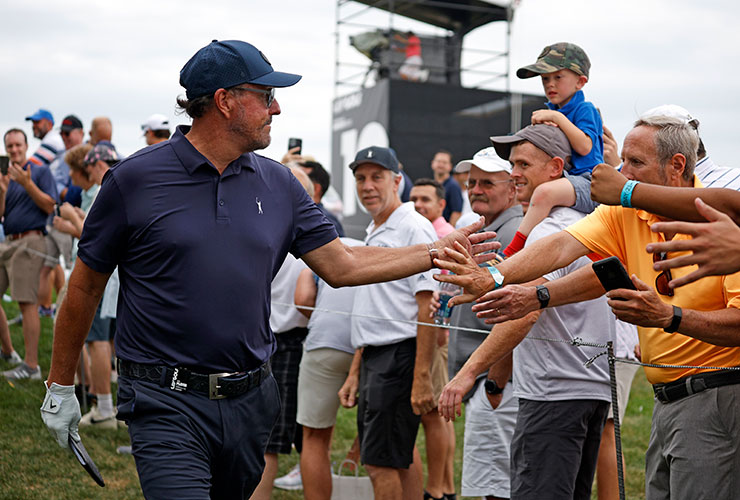 By Joel Beall
Phil Mickelson had already been suspended by the PGA Tour back in March prior to his move to LIV Golf, according to a lawsuit Mickelson filed against the tour on Wednesday.

An antitrust claim made by Mickelson, Bryson DeChambeau and nine other LIV Golf members against the tour disclosed that Mickelson received disciplinary action for, among other things, attempting to recruit members to the circuit. In the fallout of his controversial comments about Saudi Arabia and leveraging the tour, Mickelson said he was taking a personal leave of absence from the game during this time.

According to the lawsuit, that sabbatical was extended by the PGA Tour.

The complaint says that the tour then extended the suspension for Mickelson’s participation in the LIV Golf Portland event, “deferring even the mere opportunity to apply for reinstatement until after March 31, 2024.”

“Mr Mickelson’s unlawful two-year suspension from the PGA Tour has caused him irreparable professional harm, as well as financial, and commercial harm,” the claim continues. “The Tour’s unlawful suspensions are denying Mr Mickelson the right he has earned to play in events on the Tour, to earn compensation playing on the Tour, and to have the opportunities that come with such play. The Tour’s suspension has denied Mr Mickelson the right to the platform and the public exposure provided by playing on the Tour.”

When speaking to the media at the Players Championship on March 8, PGA Tour commissioner Jay Monahan repeatedly stressed the tour’s long-standing policy of not commenting on player suspensions, either those that have happened or those that might in the future. Conversely, Monahan was firm in saying that Mickelson had to answer for what he has said and done.

“He stepped away on his own accord, and he’s asked for time,” Monahan said. “He’s been given that time. We don’t comment on disciplinary matters, potential matters or actual matters. But every player is accountable for their actions out here.”

The PGA Tour, like any other employer or organization, has the discretion to enact rules of conduct of its members, employees and independent contractors. One of the provisions in the PGA Tour Player Handbook and Tournament Regulations is that each PGA Tour member acknowledges the commissioner, the tour’s policy board and the appeals committee have the authority to permanently ban a member from playing in tour co-sponsored, approved or coordinated tournaments if the member violates its regulations.

The handbook also provides that a player ceases to be a member of the PGA Tour if, in the judgment of the policy board, the member commits a serious breach of the Tournament Regulations, the PGA Tour’s Code of Ethics or otherwise conducts himself in a manner unbecoming of a professional golfer. Lawyers previously outlined to Golf Digest — regarding the Handbook and Tournament Regulations — that the PGA Tour likely has the discretion to decide that joining a competing tour is a serious breach of its regulations.

Aside from skipping the Players Championship, Mickelson also missed the Masters and the PGA Championship — the latter in which he was the defending champion. His first appearance after his sabbatical was at the inaugural LIV Golf event in London, and he competed in the US Open the following week.

You may also like:
Mickelson was suspended by PGA Tour in March; banned for two years
LIV Golf gives to local charities in New Jersey
Bryson DeChambeau on LIV/PGA feud and his $125m signing-on fee
Phil Mickelson becomes highest-paid athlete of 2022
WATCH: LIV Golf highlights from Bedminster
Stenson takes debut LIV Golf title at Bedminster
LIV Golf takeaways after third event in New Jersey
What it is like to be the first woman from your country to win a title
Five players to watch at the AIG Women’s Open
Australian army target more glory in Scotland
Laura Davies’ unique return to Muirfield
Get the August 2022 edition of Golf Digest Middle East FREE here in English and Arabic
Tiger Woods to set up new tournament at Pebble Beach
PGA Tour releases full 2022-23 schedule
The Gulf Club: Latest news from the UAE and beyond up to August 2022
Crocker takes the glory at Hero Open
Finau goes back-to-back on PGA Tour
Furue claims Women’s Scottish Open title in style
Henrik Stenson stretches LIV Golf lead
Whirlwind start for Stenson at Bedminster
LIV Golf Bedminster teams revealed
Speaking with Centurion Club’s Scott Evans
The LIV Golf wrinkle impacting the FedExCup Playoffs
Sergio holds off on quitting DP World Tour
LIV Golf to feature relegation and qualification from 2023
LIV Golf Bedminster: Ready for Round 3
Stenson defends LIV Golf decision
The Gulf Club: The Latest UAE news from July 2022
The Gulf Club: The latest UAE news from June 2022
The Gulf Club: All the latest news from around the UAE and beyond