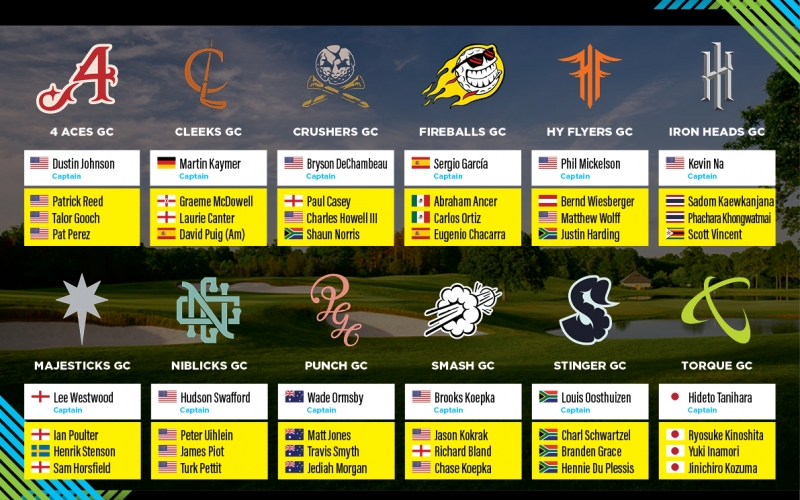 By Matt Smith
The 12 teams set to compete at the third LIV Golf Invitational Series event at Bedminster, New Jersey are now set.

Dustin Johnson’s all-American 4 Aces took the glory at Portland last time out and the former world No. 1 will once again team up with Talor Gooch, Pat Perez and Patrick Reed to defend their title.

LIV Golf’s third event of the season is taking place July 29-31 at Trump National Golf Club Bedminster in New Jersey — the new series’ second event in the US following the inaugural tournament at Centurion just outside London, and the second competition at Pumpkin Ridge, Oregon.

The LIV Golf Invitational Series features teams of four where players compete as individuals and teams for both points and prize money. Captains and teams are finalised the week of each event, as each tournament in LIV Golf’s first season may showcase a different field.

At Centurion Club, the South African ensemble at Stinger — captain Louis Oosthuizen and fellow South Africans Charl Schwartzel, Hennie du Plessis and Branden Grace, took first place with a total score of 20-under, and Schwartzel claimed the individual glory. While Johnson’s 4 Aces triumphed in Portland, it was another Stinger, Grace, who came out on top in the individual event and took home the $4 million top prize. 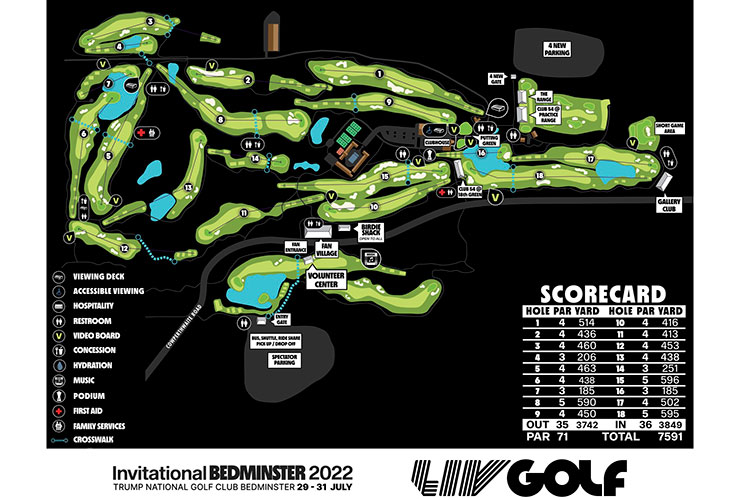 4 ACES
The all-American team captained by Dustin Johnson won by seven strokes in Portland after a line-up revision. Newcomers Patrick Reed and Pat Perez were added to the team for Portland while Talor Gooch moved over from Torque. Reed and Johnson tied for third individually, with Reed claiming the podium spot via tiebreaker. Johnson (T6), Gooch (T34) and Reed (T47) all made the cut at the recent 150th Open Championship at St Andrews.

CLEEKS
Captain Martin Kaymer has three new teammates, including former Niblicks captain Graeme McDowell, for his all-European team. Kaymer (Germany) and McDowell (Northern Ireland) have each won a US Open and also have delivered the clinching putts for Europe in the Ryder Cup (McDowell in 2010, Kaymer in 2012). Englishman Laurie Canter joins the team after playing for Majesticks in the first two events. Spain’s David Puig, ranked ninth in the world amateur rankings, played for Fireballs in London. 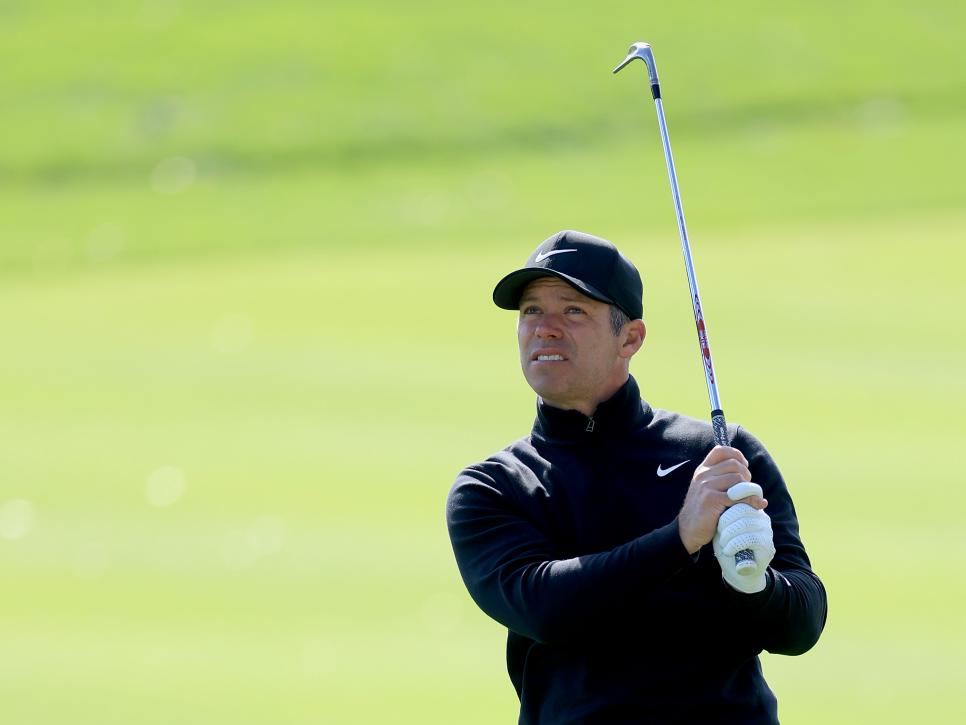 CRUSHERS
Paul Casey and Charles Howell III make their LIV Golf debuts in Bedminster by joining captain Bryson DeChambeau’s team. Casey and Howell add plenty of experience, combining for 1,100-plus worldwide starts in their professional careers. DeChambeau and Shaun Norris are the two carryovers from Portland, where DeChambeau made his LIV Golf debut and assumed captain’s duties, finishing solo 10th.

FIREBALLS
The all-Spanish speaking team captained by Sergio Garcia remains intact for Bedminster. Thanks to a birdie by Carlos Ortiz on the final hole, Fireballs broke a tie with Torque to claim the $500,000 team prize for third place in Portland. Ortiz and Abraham Ancer played for Mexico in the Tokyo Olympics, while Garcia played for Spain at the Rio Olympics in 2016. Former amateur star Eugenio Chacarra of Spain made his pro debut in Portland, finishing T-27. Ancer (T-11) and Garcia (T-68) made the cut at the Open Championship.

HY FLYERS
Justin Harding, one of the most consistent performers in the first two LIV Golf events, returns to captain Phil Mickelson’s team. Harding tied for 10th in London while playing for Hy Flyers, then tied for eighth in Portland with Crushers. Matthew Wolff and Bernd Wiesberger remain on the team. Wolff tied for eighth in his LIV Golf debut in Portland.

IRON HEADS
Zimbabwe’s Scott Vincent will join his third different team after playing for Smashers in London and Cleeks in Portland. Captain Kevin Na and Sadom Kaewkanjana have been the constants for Iron Heads in all three events, with Phachara Khongwatmai joining the team in Portland. Kaewkanjana comes in with momentum after finishing T-11 at the Open Championship — the best finish ever by a Thai player in that major. 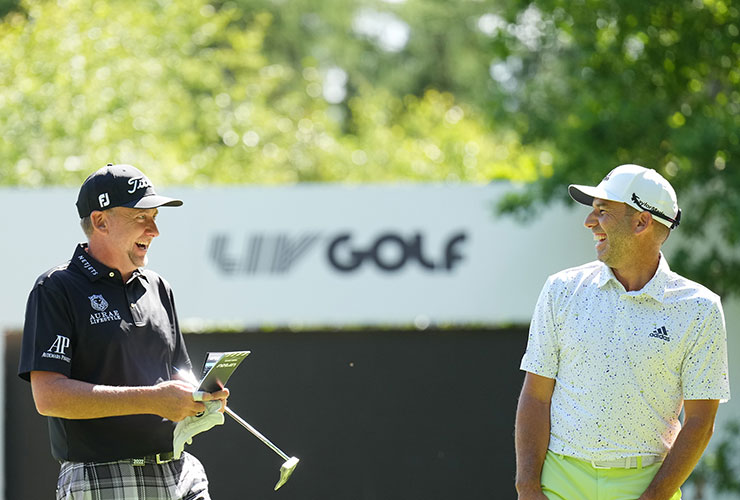 NIBLICKS
Hudson Swafford becomes captain of the new all-American team. Swafford, who played for Torque in London before joining Niblicks in Portland, takes over for Graeme McDowell (now with Cleeks). Peter Uihlein, formerly of Crushers, joins the team, while Turk Pettit returns to the team after playing for Cleeks in Portland. Uihlein joins teammate James Piot as past winners of the US Amateur.

SMASH
New LIV Golf member Jason Kokrak joins the team captained by Brooks Koepka. The big-hitting Kokrak has won three tournaments since October 2020 and will add a powerful presence off the tee. Smash finished sixth in Koepka’s debut in Portland, with all four players finishing inside the top 30. Chase Koepka played for Hy Flyers in London before joining his brother in Portland. 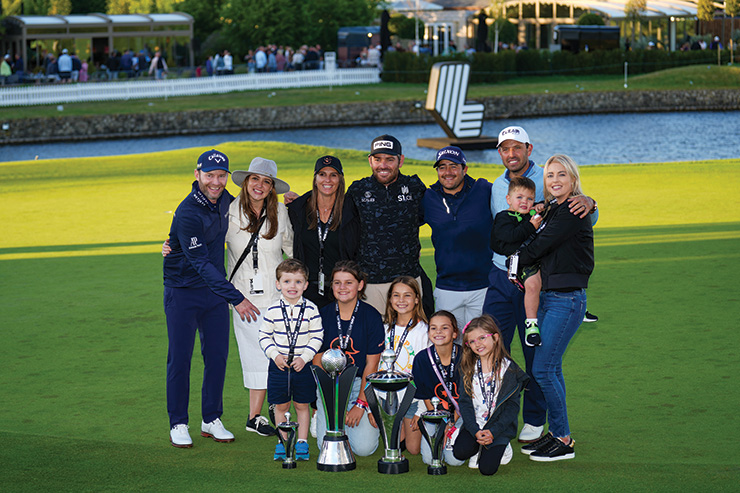 The Stinger team and their families in London. LIV Golf

STINGER
The all-South African team captained by Louis Oosthuizen has been the most successful in the first two LIV Golf events, winning by 14 strokes in London and finishing second in Portland. Stinger players also have won each of the first two individual trophies with Charl Schwartzel (London) and Branden Grace (Portland). Each of the four members has finished inside the top five in at least one of the first two events.

TORQUE
The all-Japanese team captained by Hideto Tanihara finished fourth in Portland, just one stroke off the podium. Jinichiro Kozuma was the team’s top performer, placing solo sixth in the individual standings and ranking as the second-best putter among all 48 players in the field. Yuki Inamori, making his LIV Golf debut in Portland, tied for 10th, while Tanihara and Ryosuke Kinoshita also finished inside the top 24.