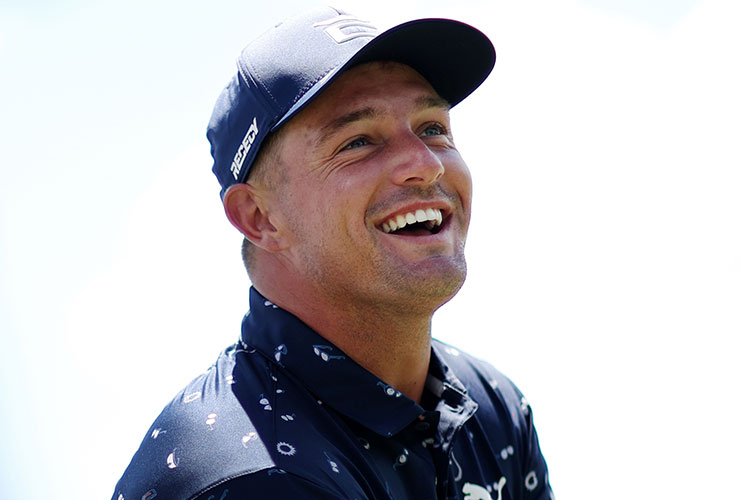 By Matt Smith
LIV Golf star Bryson DeChambeau has insisted that the feud between the new series and the PGA Tour will be resolved “shortly”, while hinting he was paid $125 million to sign for Greg Norman’s innovative circuit — and is paying back into the community.

Speaking to Fox News’ Tucker Carlson, the big-hitting American was relaxed and confident when asked if he is concerned about a lifetime ban from the PGA Tour for joining LIV Golf  — a perceived rival to the US tour.

“It doesn’t make sense,” he said. “No, I’m not worried about that. I think it will get figured out.”

Interestingly, the 2020 US Open champion added: “I personally know that it will get figured out, whether it’s legally or whether they come to the table and work out terms. I definitely think it will wash itself out in the future, pretty shortly.”

“I’ve always thought golf has to tailor to the younger generation and I am all about growing the game of golf. I think that in every industry, no matter what it is, it has always been changing and innovating and golf isn’t any different. New formats and teams is enhancing the spirit of the game.”

Inevitably, the topic of money came up during the interview, and ‘The Scientist’ was open about the lure of the cash and how he plans to use it to help the community.

“Solely for the economics, it was a no-brainer,” Dechambeau said. “This is our livelihoods and it was a great economic opportunity for golfers to make a lot of money.

“That’s why we grew up playing golf — also for the history, to go and win majors, PGA Tour events and now I want to win LIV events. You can see the passion and competitive aspect of this environment out here and we all want to win every single week.

“With the resources I now have, it doesn’t mean I’m able to sit on my butt and do nothing,” he said. “At a certain point in time you realise there’s more to life than golf and that’s what LIV Golf allows me to do.”

When asked if reports of a $125 million signing-on fee were accurate, DeChambeau responded: “I’m not gonna say the details, I mean for what’s reported it’s somewhat close. It’s a four-and-a-half-year deal, I can definitely tell you that and a lot of it was upfront, which is great.

“I’ve already put it in places that make sense whether it’s my foundation or real estate — being able to build a multi-sport complex — or taking care of my family … numerous other things too.”