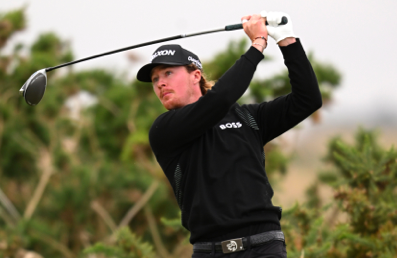 By Matt Smith
American youngster Sean Crocker produced a brilliant course-record round of 63 to lead the Hero Open by a shot at a friendly Fairmont St Andrews on Thursday.

The 25-year-old picked up six shots in five holes on the front nine after going birdie-birdie-birdie-eagle-birdie from the third.

And after dropping his only shot of the day at the 10th, he made four birdies in his next five holes to get to nine-under par and stand alone at the top of the leaderboard.

Crocker’s lowest-ever round on the DP World Tour comes in the same season as a long run of missed cuts at the beginning of the year which he described as one of the toughest things he has been through.

After a day of low scoring, Frenchman Romain Langasque, English duo Ben Stow and Ashley Chesters, Swede Jens Dantorp and Dubai-based Spaniard Adrian Otaegui were in a tie for second on eight-under, with a group of six players, including home favourites David Law and Connor Syme, one shot further back.

“That was fun,” said Crocker. “I don’t get too many days like that on the greens, but when I get it going it seems to end in a nice low round. Which is nice, because I’m not as used to it as some of these guys. The greens aren’t too slopey, not too linksy. They were beautiful, you just try to get a good read, starting them on line and hoping for the best from there.

“Nine missed cuts. Mentally that was the toughest thing I’ve gone through so far. People speak about the mental side of sport but that’s probably the darkest I’ve been in life on a golf course. It’s the first time I’ve had bad things happen to me on the golf course. And it’s just a case of having to grow up. I just said to myself: ‘OK, you’ve been lucky to play good golf your whole life and now you’re going to get a taste of what this game is really like.’

“You just realise how hard this game is, and I realise that I can hit bad shots; I can do all the work and I can still hit bad shots. There’s no point in getting upset. Mentally it helped me out a lot. It showed me a lot of bad places on a golf course but it showed me, it opened my eyes to the game of golf.

“It’s fun today. Playing good golf is fun. We’re out their having a laugh, going about our business. Tomorrow I could wake up and play really bad or really well. We’re just trying for the best we can do. Sometimes it happens, sometimes it doesn’t. But you always have fun and at the end you get to go an enjoy a nice meal.”