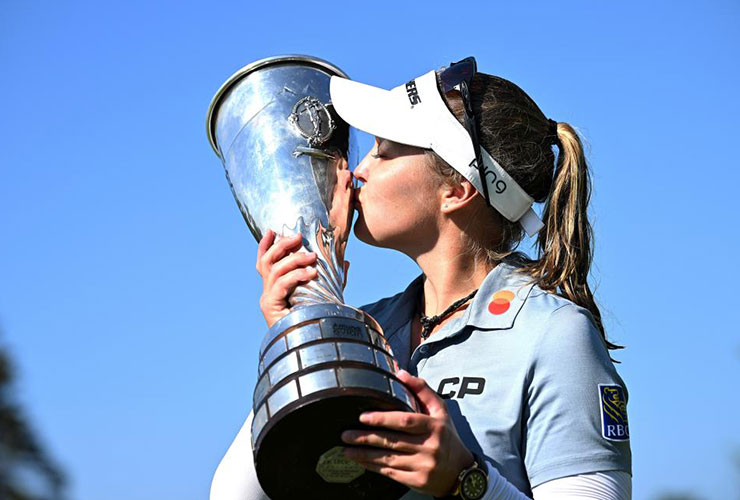 By Keely Levins
A year ago, Jeonguen Lee6 saw a five-shot final-round lead slip away at the Amundi Evian Championship, the South Korean ultimately losing the tournament in a playoff to Minjee Lee. On Sunday, at the Evian Resort Golf Club, it looked like history was repeating itself.

Brooke Henderson opened with rounds of 64-64-68 and had a two-shot edge, but started Day 4 in France with a bogey on the first hole and a double-bogey on the sixth (thanks to a four-putt). Suddenly, the leaderboard surged around her, the 24-year-old Canadian needing to fight from behind on the back nine. But that’s where this year’s drama changed. With birdies on three of her final five holes, including a 12-footer on the par-5 18th, Henderson rallied to win by one shot.

“It was definitely an interesting day. Not the start that I wanted, but I stayed pretty patient, as patient as I could under those circumstances,” said Henderson, who ultimately finished with an even-par 71 on Sunday for a 17-under 267 total. “Then going into the back nine, you know, the saying is that majors are won on the back nine on Sunday, so I just tried to keep that frame of mind, and knew I was still in it if I could have a solid back.”

While experienced players such as major champions Nelly Korda, Lydia Ko and Jin Young Ko all made charges on Sunday, it was the No. 283 player in the world who became Henderson’s greatest challenger. Sophia Schubert, a 26-year-old LPGA rookie from Tennessee, was having an out-of-nowhere performance at the Evian.

In a season where she had missed five cuts in 11 starts, Schubert was cruising around the Evian Resort Golf Club. A closing three-under 68 allowed the former University of Texas All-American to finish at 16-under. She then had to watch to see if it was enough to force a playoff with Henderson, at 16-under herself when teeing off on the reachable-in-two par-5 18th.

Henderson’s tee shot found the left rough, causing her to lay-up back in the fairway with her second. She hit her approach from 107 yards to about 12 feet, the same distance Schubert missed a birdie try from moments earlier.

The putter seemed to be the issue for Henderson on Sunday. Despite hitting 15 greens, the No. 10 ranked player in the world had 34 putts. But Henderson buried her final putt, making all of those she misses obsolete.

Afterward, Henderson looked a little shocked, mouthing what looked like ‘Oh my God,’ to her sister, Brittany, who’s also her caddie. The win, her second in 2022 (to go with the LPGA Classic in June) is Henderson’s 12th on the LPGA Tour, further cementing her as the most accomplished Canadian golfer in history. And it was her second major, to go with a win at the 2016 KPMG Women’s PGA, making her the first Canadian golfer, male or female, to be a multiple major winner.

The financial spoils for the victory were nice, too. The record $1 million winner’s cheque pushes Henderson past the $10 million threshold for her career, making her just the 24th player in LPGA history to break eight figures.

“In 2016, winning the first major changed my life,” Henderson said. “My world ranking shot up, and I just received a ton more attention from fans and media. It also made me feel like I really belonged out here and that I could contend for big, major championships and compete against the best in the world, which is an amazing feeling,” Henderson said. “It has been a long time, and getting off to a fast start early this week, it just felt great to be at the top of the leaderboard at a major. I just tried to take that excitement as far as I could.”

It has been a long time, but Henderson said this one was definitely worth the wait.