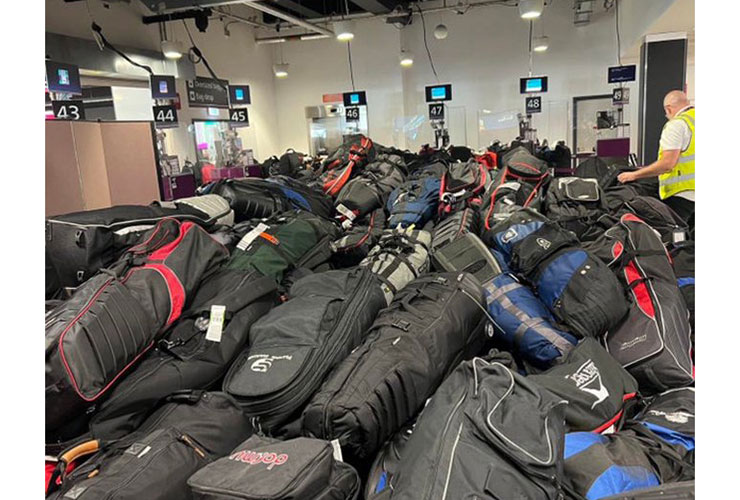 By Jay Coffin
This image from the Caddie Network’s Twitter feed shows golf bags piled up in the Edinburgh Airport, just 50 miles from the Old Course.

Even when you see the picture you just simply cannot understand it. Stop. Take a few seconds. Look at it some more. Then again. Still.

Where does your mind wander? Are you trying to count the number of bags in the heaping pile? Are you trying to see if there’s a bag there that looks similar to yours even though you weren’t in Scotland? Are you contacting friends who were recently in Scotland and asking them if they have their clubs?

At any rate, this photo from the Caddie Network’s Twitter feed, which originally was posted on Reddit, says it comes from the Edinburgh Airport, which is the biggest airport in Scotland and is just 50 miles from the Old Course in St Andrews. You know, the place that just hosted the 150th Open Championship.

If you think it’s difficult to look at, then imagine working at the airport and having to deal with all the angry customers. Which brings us to this bit of related news.

“Unfortunately, we have seen a rise in the amount of abuse our teams are facing from passengers and although we appreciate the frustration they are facing, it is not acceptable and there is no excuse for abuse,” an Edinburgh Airport spokesperson told Fortune.

LOOK: Cameron Smith struggles to get Claret Jug in overhead storage on commercial flight out of Scotland after Open Championship

Open Championship 2022: Justin Rose withdraws moments before tee off at St Andrews — alternate has to sprint to make tee time