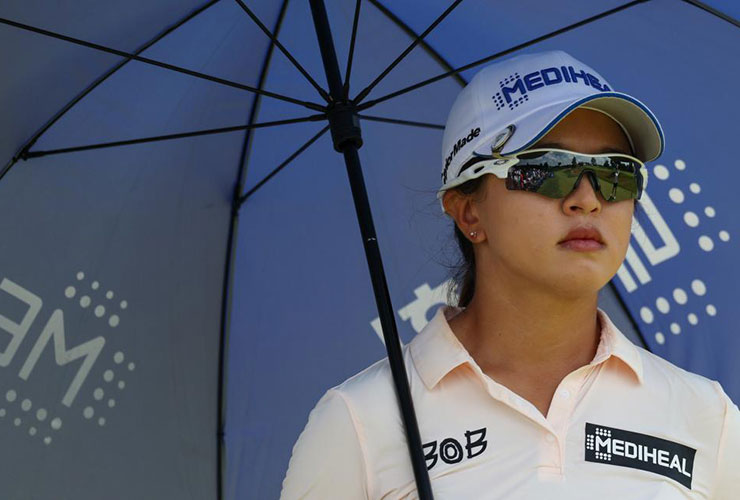 By Keely Levins
The heat is a factor at this week’s KPMG Women’s PGA Championship. With temperatures in the 90s and the humidity up, players were talking about the importance of heat management over the weekend at Congressional Country Club. Lexi Thompson said she was drinking a bottle of water every hole during her third round on Saturday. Sei Young Kim rarely drinks Gatorade on-course because of the sugar content, but she said she was consuming the sports drink to make up for the amount she was sweating during the round.

When you’ve played in extreme heat in the UAE, have you ever consumed a bottle of water every hole? LPGA physio Chris Wicker says many average players don’t hydrate properly on hot days. Here’s how to make sure you’re doing it right.

When you know it’s going to be sweltering, Wicker says to start hydrating the day before. “You want to have a build-up,” Wicker says. Guidelines for how much to drink depends on your size — the bigger you are, the more you’ll need to hydrate. But Wicker says to take in a minimum of 32-64 ounces of water the day before your round. Another guideline you can follow is to take your bodyweight in pounds, divide it by two, and drink that amount of water in ounces.

When you’re on-course, Wicker says it’s a good idea to rotate drinking water and other hydration drinks. “If it’s hot and humid, you’re sweating … it’s losing the sweat that takes the electrolytes out,” Wicker said. A few things to look out for: You don’t want to drink something with too much sugar and you want something with sodium in it because you want to replenish the sodium you’re sweating out. You can carry some of these drinks in powder form to lighten the load in your bag.

“There’s a lot on the market,” Wicker says. “At the US Women’s Open, they had Biosteel, which is a good product with low sugar. There’s also Liquid IV, Nuun. The big thing is to make sure you’re not chugging a lot of sugar.”

Wicker says on really hot days, drinking a bottle of liquid per hole or every other hole is a good guideline.

Signs that are more dangerous, Wicker says, are not urinating at all and not sweating.

“If you start to get light-headed and nauseated, you’re moving towards heat stroke,” Wicker said.

Keep yourself safe and give yourself the best chance of playing well in extreme heat by hydrating like an LPGA Pro: Drink a bottle per hole and mix in some electrolyte drinks.