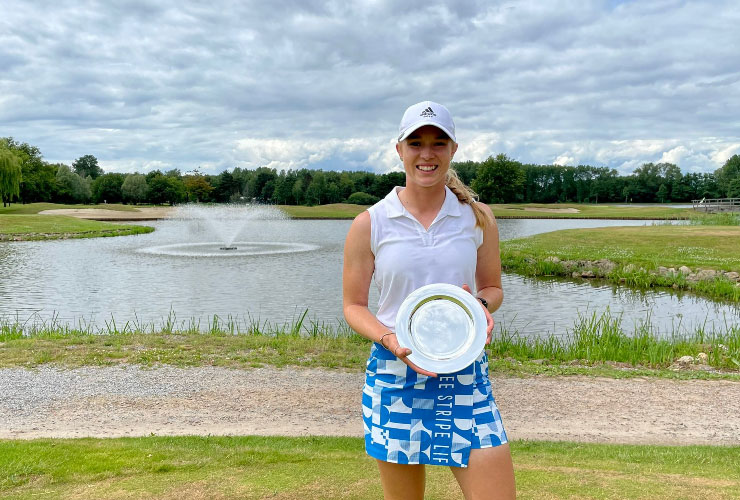 Australia’s Kristalle Blum recorded her first victory on the series at the Golf Vlaanderen LETAS Trophy, one ahead of Noja, local star Sophie Bert and France’s Yvie Chaucheprat and Momoka Kobori from New Zealand.

The 24-year-old Blum held on to the one-shot lead at the start of the day having carded rounds of 69 and 67 on the first two days.

Although Blum dropped a few shots during the round, she signed for a three-over 75 to keep her single-shot lead in front of the chasing pack.

“I was very nervous the last few holes and just tried to focus on my breathing,” she said. “I had no idea where I sat on the leaderboard, so I just had to keep doing my thing and I’m glad it was enough.”

It was particularly special for Blum as she has had her brother Nick on the bag for the last three LETAS events, where she has had two top-10 finishes and a victory.

T2nd this week in 🇧🇪 @LETAccess @golfvlaanderen LETAS Trophy. Disappointing making a double on 17th and coming short by one shot but that’s golf😄 Thank you @RBGF1912 @millenniumgolf for the class event.. 🔜France pic.twitter.com/kYEi18gFKC

With her runner-up finish, Germany’s Noja continues to dominate the LETAS Order of Merit standings with 1,171.25 points while New Zealand’s Kobori moves to the second spot with 813.75 points.

After her first win and three additional top-10 finishes this season, Kristalle Blum moves to fourth place with 740.75 points.

You might also like
In Gee stumbles but clings on to KPMG lead
In Gee stays in charge after equipment change
KPMG: In Gee Chun jumps out to early lead
Five to watch at KPMG PGA Championship
KPMG Women’s PGA Championship doubles purse to $9m
Saudi girls celebrate Aramco podium spot
Dubai’s Chiara Noja skips another event through injury
Abu Dhabi-based 12-year-old wins in Scotland
All the latest news from around the UAE and beyond
Bronte Law triumphs in London
WATCH: Highlights from Day 3
Watch action from Day 2 at Aramco
Davis sizzles in London