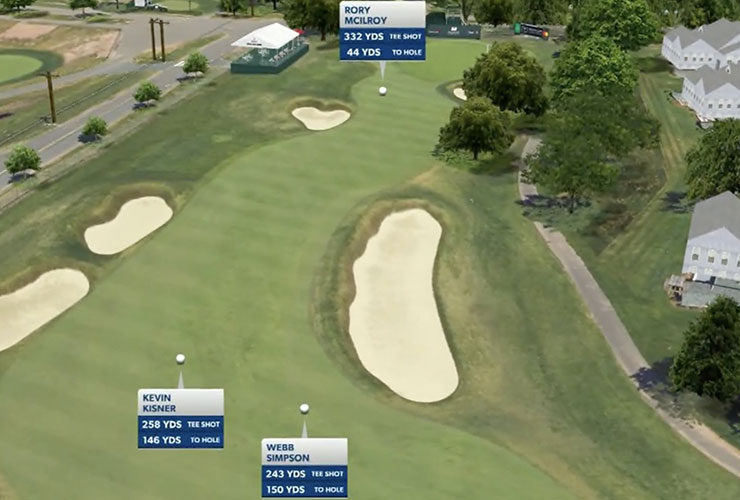 By Alex Myers
To be clear, there were plenty of factors that went into Rory McIlroy outdriving his playing partners by a Connecticut country mile on his final hole on Thursday at the Travelers Championship. But the main reason is that Rory hits a long ball. And boy, was he locked in during the opening round.

The par-4 ninth hole at TPC River Highlands is a 405-yard, dogleg right. But it plays much shorter if you take an aggressive line at the houses down the right side. And being McIlroy’s last hole of the day after starting on the back nine, and with him playing the previous 17 holes in seven-under, the four-time major champ was feeling good as he reached the tee.

When he reached his ball, he may have been feeling bad for the guys he was playing with. That’s because he outdrove Webb Simpson and Kevin Kisner by a combined 163 yards. Yep, we double-checked the maths on that.

Now, to be clear, those guys aren’t bombers like Rory. And they took less club and a more conservative route off the tee. Still, it’s hard not to look at this graphic and not laugh:

You could literally build a car park between those drives! And a supersized one, at that.

Most importantly, McIlroy got up and down after his mammoth blast for one last birdie to cap an eight-under-par 62. Here’s a look at his incredible drive and beautiful pitch that nearly dropped for an eagle:

Meanwhile, the other two guys in the group only managed par, although Rory’s gap on the leaderboard over Simpson, who shot 64, isn’t quite as big. Kisner had a solid day as well with 67.

McIlroy is tied for the lead with JT Poston and one ahead of Xander Schauffele and Martin Laird. The World No. 2 won his last regular PGA Tour start at the Canadian Open two weeks ago and finished T-5 at the US Open last week.

Despite not having won a major in almost eight years, Rory remains the favorite to win the final one of 2022 at next month’s Open Championship at St Andrews. With rounds — and drives — like this, it’s not hard to see why.