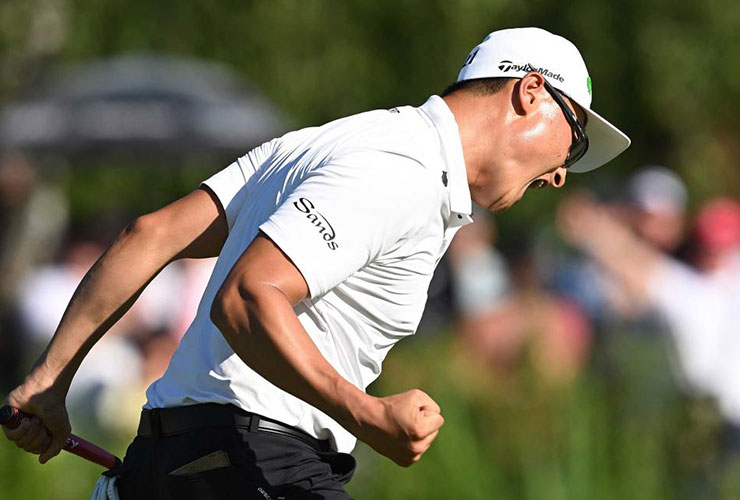 Li Haotong of China celebrates after holing a 50-foot birdie putt in a playoff to eventual win the BMW International Open. Stuart Franklin

Say what you like about Li Haotong, when he wins he does it with some style. Ten months on from nearly quitting the game because he was so frustrated with his form, the 26-year-old from China is, for the third time and for the first time in four-and-a-half years, a winner on the DP World Tour. Leading from start-to-finish, Li, a member of the International side at the 2019 Presidents Cup, claimed the BMW International Open title. An eventful birdie on the first playoff hole was enough to beat Belgium’s Thomas Pieters after the pair tied on 22-under-par 266 at the Nord Eichenried course just outside Munich.

All of which sounds relatively straightforward. But it was anything but for Li, who had plummeted as low as 460th in the World Ranking at the end of 2021, a year in which he made his first halfway cut in October.

With three holes to play in regulation, the eventual playoff protagonists were tied on 20-under along with Ryan Fox of New Zealand. Fox finished with three pars, which wasn’t close to being good enough; both Li and Pieters made two birdies. But if that was exciting enough, it was nothing compared to the extra hole, the 18th, a 568-yard right-to-left dogleg par 5.

After two shots, Pieters was in a greenside bunker maybe 35 yards from the flag. An awkward shot and distance. Li, who got lucky when just missing a tree off the tee then skirting the water short and right of the green with his second, was just off the putting surface facing what looked like a relatively easy chip. Advantage Li.

Following Pieters explosion to around 15 feet (a reasonable effort in the circumstances), Li returned to his 2021 self by thinning his chip across the two-tier putting surface, the ball finishing a good 15 yards beyond the cup. Then, you guessed it, Li made the ridiculous and unlikely putt up and over the slope in the green for birdie, a feat that provoked a poor effort from a clearly stunned Pieters. Suddenly, it was all over.

Haotong Li wins in style. One of the best putts he will hit in his career!#BMWInternationalOpen pic.twitter.com/1SeNxC9qa9

“I don’t have the words to describe how I feel right now,” said an emotional Li, whose last win came at the 2018 Dubai Desert Classic, where he memorably outduelled Rory McIlroy down the stretch. “When I hit that chip, I thought I had given away another chance. I can’t believe it has happened. Ten months ago, I had decided to literally quit golf. Then somehow, where I am now … it is golf and hard to describe. I have no idea how I won this playoff. It was an up-and-down battle. I hit a lot of good putts today, especially on the back nine. I already knew it was going to be super tough. I was just telling myself to hang in there. Win or lose I just wanted to play my best. And luckily, I did.”

That last bit isn’t quite true. Armed with a three-shot lead starting the final round, Li played erratically over the closing 18 holes, his six birdies countered by four bogeys (only one less than he made over the first 54 holes). But 70 was enough (just) to set up the win over Pieters, whose career is similarly resurgent this year. After victory in the Abu Dhabi HSBC Championship at Yas Links at the start of the year. The 30-year-old Belgian has shown further glimpses of the form that made him the star of the losing European Ryder Cup side at Hazeltine National in 2016. This was his third top-10 DP World Tour finish since that win in the Middle East.