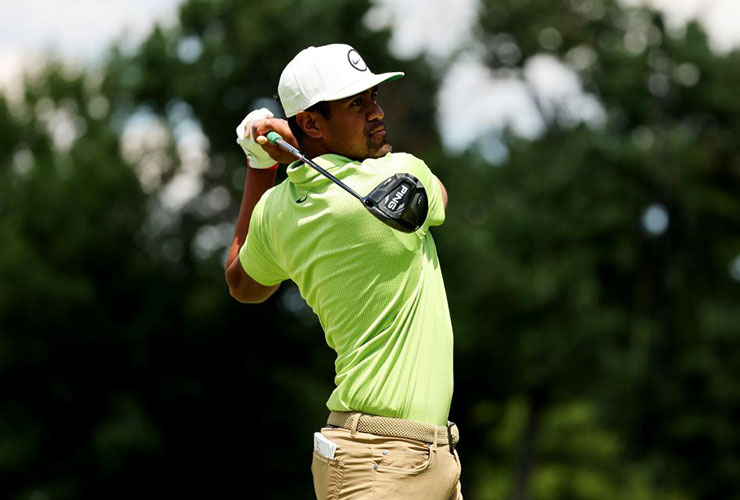 A key two-hole stretch gave Finau some breathing room. A clutch 11-footer for an up-and-down par at the ninth was followed by a birdie at the 10th, the fourth day in a row he birdied the hole to stretch the lead to three over Taylor Pendrith.

For Finau the driver is always a weapon. At Detroit, however, it was in a manner not normally associated with him. Instead of solely overpowering the course, the long-hitting Finau found fairway after fairway, too, putting him in position to attack the flagstick.

The 12th hole was typical of his play for the week. A 321-yard tee shot settled in the short grass, leaving an 8-iron from 170 yards that found the green 30 feet away. Given another birdie opportunity, Finau took advantage, rolling in the putt and putting the lead at four after Pendrith bogeyed. Finau ranked fifth in driving accuracy for the week, hitting 46 of 56 fairways for a 82.1-percent clip.

“I think that’s a big reason I’ve been hitting so many greens,” Finau said after the third round. “I’m just hitting a lot more fairways than I’m accustomed to or than I have in the past. This golf course really opens up to you if you hit it in the short grass and it definitely has for me these first three rounds.”

Finau’s driver is Ping’s G425 LST—the low-spin version of the G425 line. Although the driver has 9 degrees of loft, it is set in manner where the actual loft is just 7 degrees. The shaft is Mitsubishi’s Diamana D+ Limited 70 TX at 45.25 inches and is tipped 1.5 inches. The grip is a custom Lamkin UTX midsize and the movable weight is in the neutral position. The swingweight is a hefty D-7.

Finau also ranked first in greens in regulation, hitting a career high and almost unheard of 66 of 72 greens in regulation (91.7 percent) with his Ping Blueprint blade irons with Nippon N.S. Pro Modus 3 Tour 120 TX shafts. Such stress-free play had Finau bogey-free for the week until a three-putt from nearly 70 feet at the par-3 11th gave him his lone bogey.

All those impressive numbers helped Finau erase one he’d rather forget — he entered the final round tied with Pendrith for the top spot but was 0-for-5 when holding or sharing the 54-hole lead.