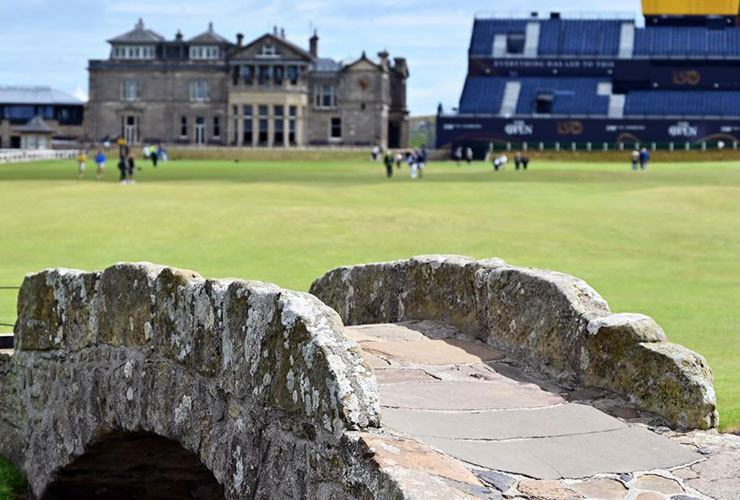 By Gabrielle Herzig
“History” — we’ll hear that word a lot on TV this week as the 150th Open Championship descends upon the most revered golf venue in the world. That’s because St. Andrews’ Old Course is absolutely riddled with it.

There’s no surprise there. The sacred grounds are centuries old and saw the birth of the game of golf. All of the legacy surrounding the Old Course isn’t just in the air, though. It’s woven into the fairways and constructed into the surrounding St Andrews town and landscape. As you watch the broadcast from Thursday until the Champion Golfer of the Year is crowned on Sunday, you might hear announcers refer to iconic landmarks of the property such as Swilcan Bridge and the Hell Bunker. But you might be curious to hear their backstory. We rounded up the most famous design quirks, course hazards, historical structures and landmarks that St Andrews has to offer. 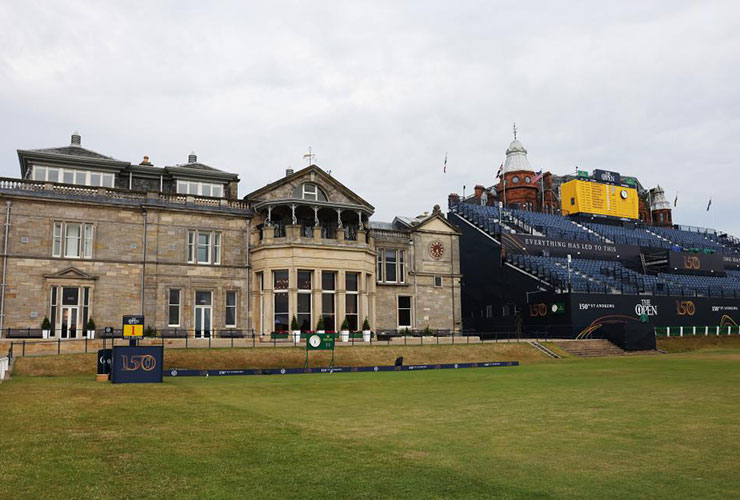 The stately exterior of the Royal & Ancient Golf Club’s headquarters is arguably the most iconic building in all of golf. Sitting behind the first tee and the 18th green at the Old Course, the clubhouse, built in 1854, is only accessible to R&A members and guests — except for one day every year. Relics of the game’s most cherished moments are on display inside, including the original Claret Jug, which hasn’t left the building since it was presented to Bobby Jones after he won the 1927 championship. 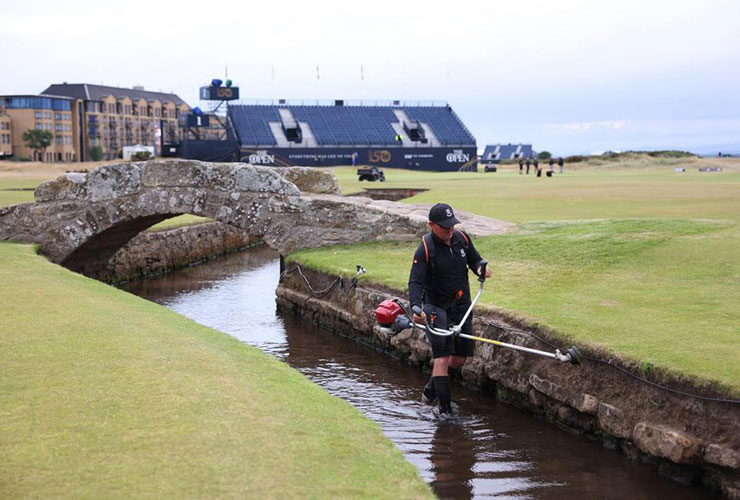 St Andrews’ only water hazard weaves elegantly across the 18th and first fairways at the Old Course, ultimately emptying into St Andrews Bay. The burn was originally known as Swilcanth, a name that is considered to be rooted in the Welsh verb that means “to swallow.” In 1834, a man by the name of Robert Goodfellow set the waterlane in place for the first time with 181 feet of stone. 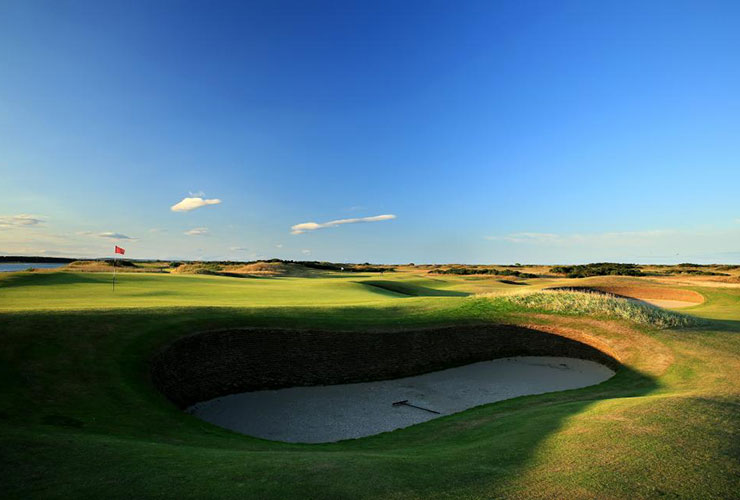 The routing of the Old Course famously stretches out away from the clubhouse, and then back in, but at the apex of its layout is a cluster of holes that weave in and out of each other. This stretch is known as “The Loop”, as holes 7 and 11 criss-cross fairways, causing players to shoot diagonally at their respective pins. The convoluted circle of holes makes more sense when you consider that the Old Course was designed to be played both clockwise and counterclockwise. The corner is also dangerously exposed to the coastal winds at the tip of the property. 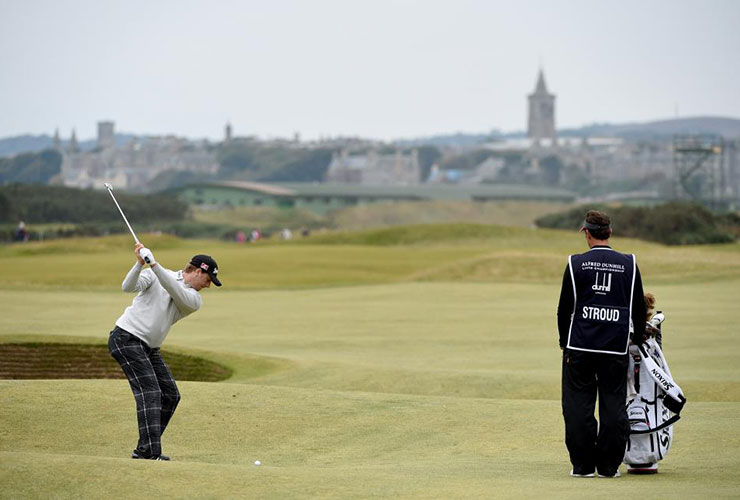 The Elysian Fields refer to the safe stretch of fairway on the par-5 14th hole, beyond the treacherous Beardies fairway bunkers. The site is appropriately named after the Greek mythological conception of paradise in the afterlife, as players will take a deep sigh of relief if their shots rest securely in the haven of short grass. 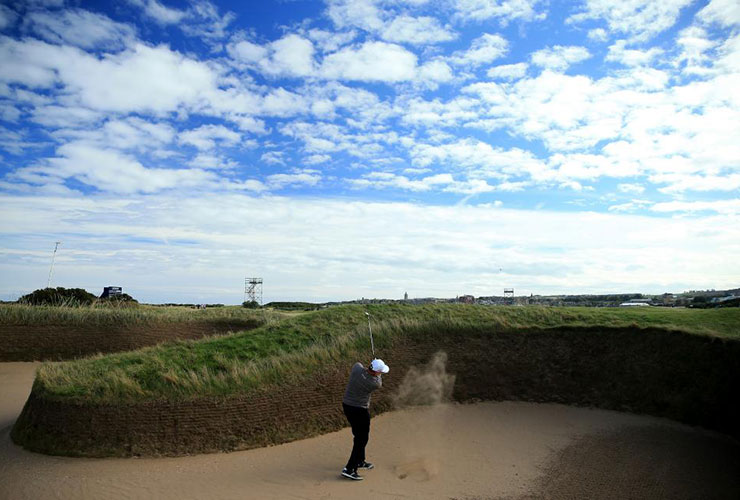 Another world-renowned landmark rests on the tricky 14th hole: Hell Bunker is 25 yards wide and 10 feet deep and is a magnet for double and triple bogeys or worse. In 1995, Jack Nicklaus took three shots to escape the infamous pit of doom. 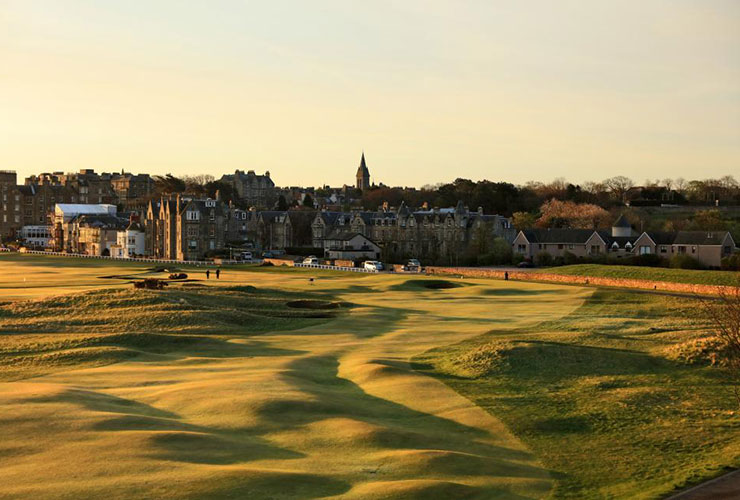 Known as the most famous hole in golf, and possibly the hardest par four in the game, the distinct 17th is both a landmark and a determining factor in the outcome of any championship held at the Old Course. After players are forced to carry their drives over old railway sheds at the corner of the St Andrews Hotel, flirting with out of bounds along the entire right side, they’ll encounter the Road Hole bunker, a steep and compact greenside pot bunker which most players consider to be the most difficult on the course. 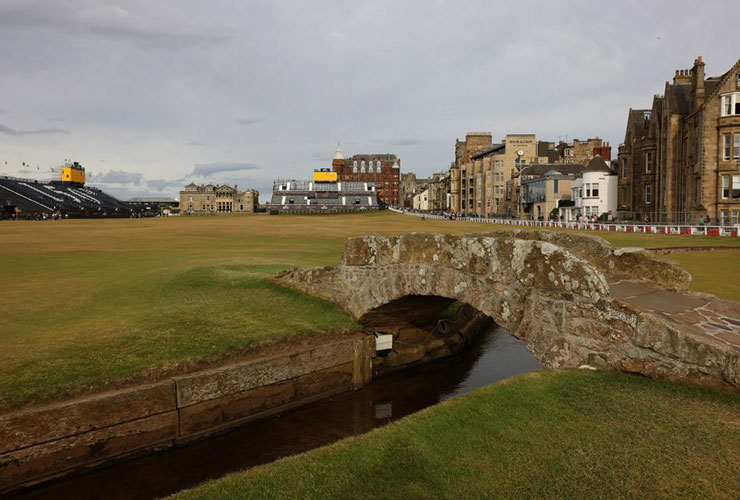 Swilcan Bridge, which was also known as Golfers’ Bridge for hundreds of years, crosses the meandering Swilcan Burn. The picturesque stone structure is undeniably the most recognisable landmark at St Andrews. It’s almost a crime not to take a photograph with your playing partners on the peak of the bridge — which scholars suspect has been standing for 700 years — as you make the historic walk up the 18th fairway. In 1869, Old Tom Morris refashioned the burn, and now almost half of the bridge is hidden beneath the hallowed final fairway.

The Valley of Sin 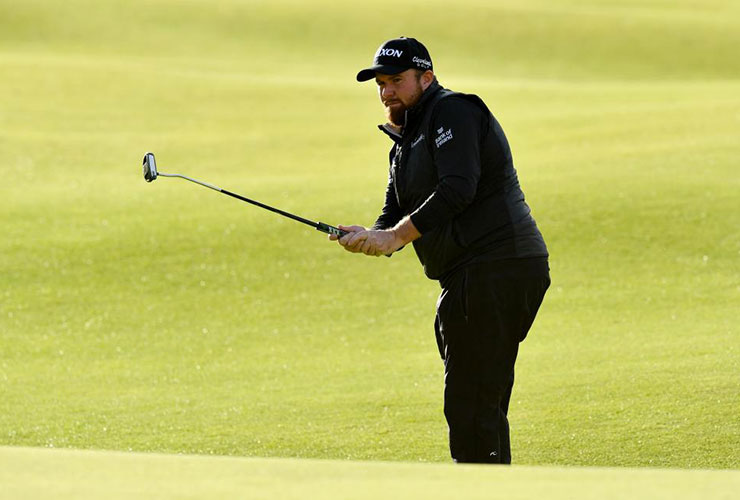 The infamous depression at the front of the 18th green is aptly named the Valley of Sin, as it has been the site of many nasty breaks for golfers completing their rounds at the Old Course. It’s deceptively deep, at 8 feet below the putting surface, and when one finds themselves in its depths, it’s a good idea to play the tough short game shot on the ground. In 1995, Constantino Rocco holed a monstrous putt from the swale to enter a playoff he would eventually lose to John Daly for the title. 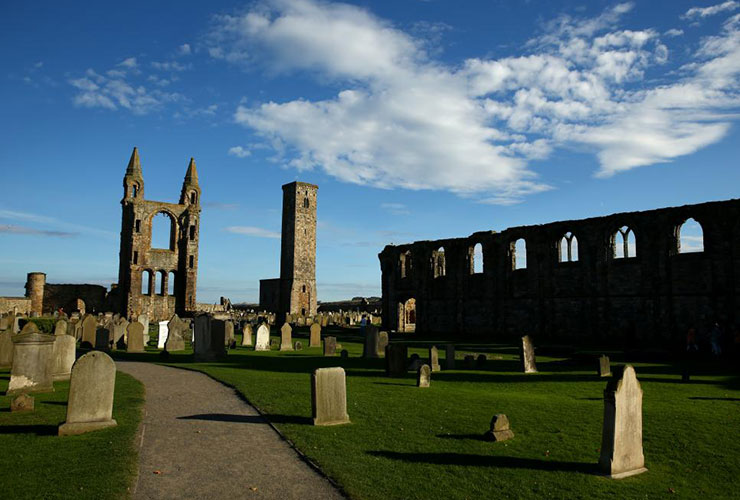 Scotland’s largest medieval church sits just five minutes away from the Old Course’s first tee. It’s mostly in ruin, but that’s because it was built around 1130 and has survived devastating storms, the first War of Independence against England, and the Scottish Reformation during which Catholic mass was outlawed. 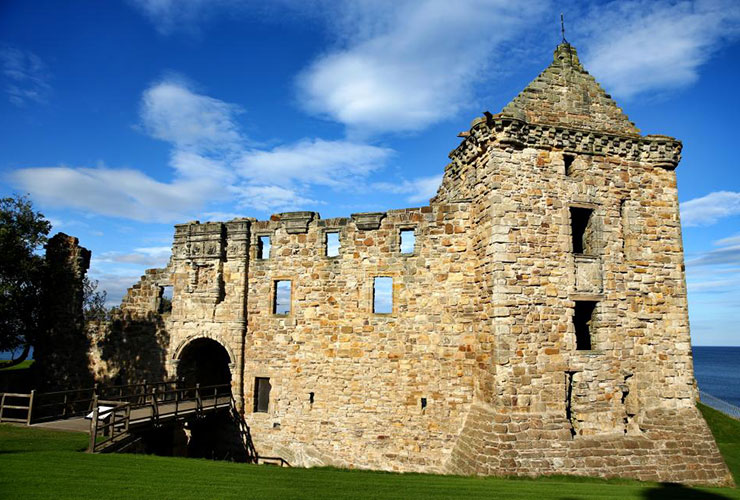 Just up the coast from the Old Course is the 450-year-old St Andrews Castle. A key landmark during the 16th century’s Protestant Reformation, the structure used to serve as the luxurious residence of Scotland’s archbishop. The castle has stood the test of wars, sieges, and was even used as a state prison during its extensive history. 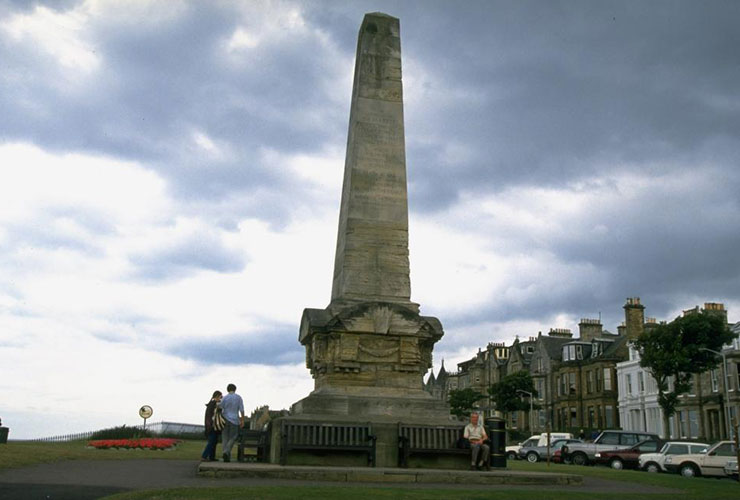 The obelisk that is normally in plain sight behind the R&A Clubhouse and 18th green (this week it will be obstructed by grandstands) is hugely important to the history of St Andrews. It stands in honour of four Protestants who were killed in the city for criticising the Catholic church in various ways during the 16th century’s Scottish Reformation. 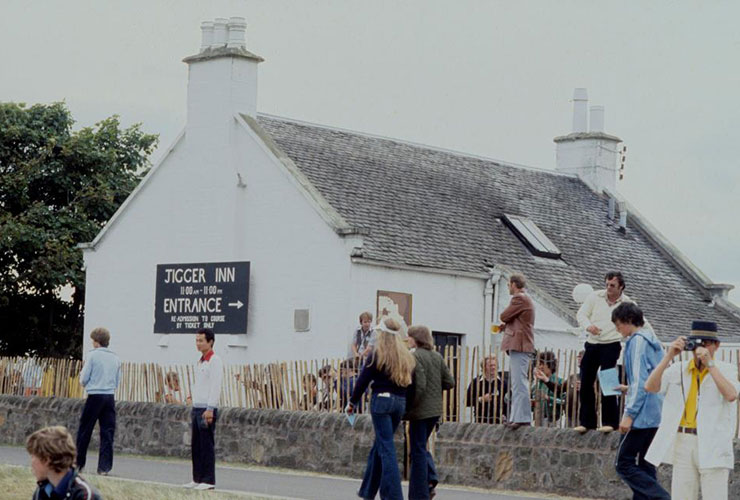 One of the more famous 19th holes in golf, the Jigger Inn sits just off the 17th fairway. Back in the 1850s, the building served as the stationmaster’s lodge at the railway station that used to run alongside the links. 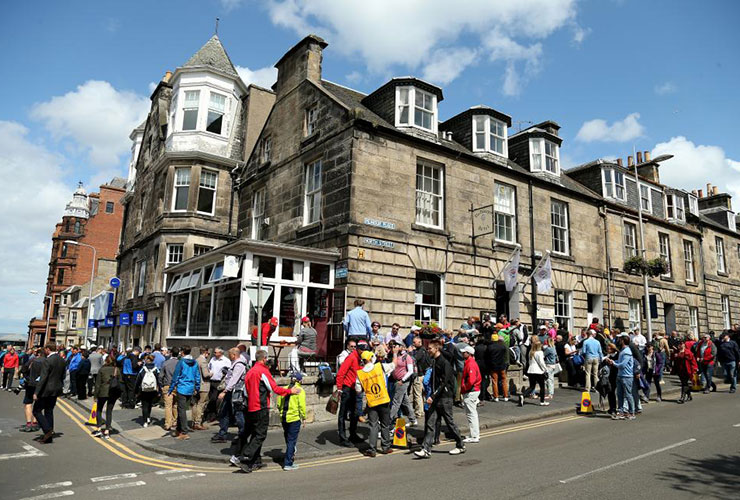 Another iconic post-round spot is the Dunvegan Hotel, which is just a mere 100 yards away from the 18th green on the corner of Golf Place and North Street. The bar has been enjoyed by golfers from around the world, particularly visitors, and its popularity is demonstrated by the scores of signed photographs of VIPs that line the walls and ceilings of its interior.

It’s not surprising that the oldest golf shop in the world rests just off the 18th fairway of the Old Course. The store was owned by Old Tom Morris, the father of golf, but the site of his original workshop is disguised as an Open Championship merchandise store this week. 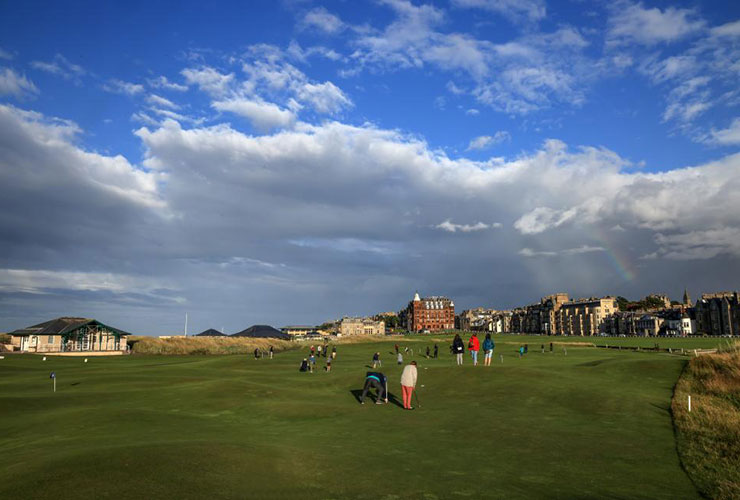 The 18-hole putting course at St Andrews is a place for golfers, young and old, new and experienced, and everything in between. It is run by the St Andrews Ladies Putting Club, costs just £4 to play, and entertains all guests with its dramatic undulations.