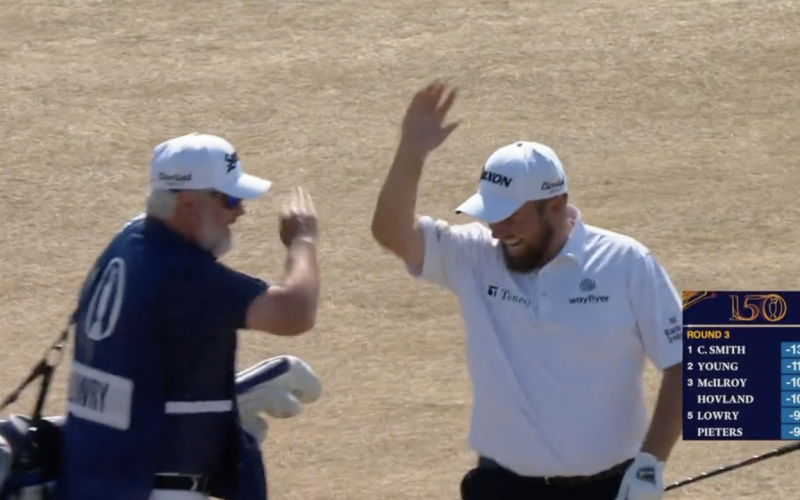 By Joel Beall
Find someone who loves you the way Shane Lowry loves the Open.

Lowry, who won the claret jug in 2019, began Round 3 at the Old Course nine shots behind 36-hole leader Cameron Smith. And on a day when most of the morning wave was making a move, the Irishman mostly stayed put, just one under through his first eight holes.

Then came the ninth and 10th. And brother, did the big man make a move.

Lowry’s drive at the short par-4 ninth finished in the heather, ostensibly leaving a precarious pitch to try and save birdie on (statistically speaking) the easiest hole on the venerable links. Lowry did one better, his chip from 43 yards finding the bottom of the cup.

Good as that was, Lowry one-upped himself at the 10th, dunking a second straight shot for an eagle 2, this one from 46 yards out, sending Lowry and the crowd into a frenzy with the Irishman imploring the crowd to turn the frenzy up to 11.

According to stats guru Justin Ray, this is the first time in the last 25 years that a player has made consecutive par-4 eagles at a major. The back-to-back feat jumped Lowry up to a tie for fifth at the time of writing, and though that position likely won’t stand as the leaders begin to make their way to the course, it’s going to be hard for anyone to top that highlight reel.

You may also like:
What next for Tiger Woods?
The Open: Day 2 Championship takeaways
WATCH: Poulter’s record putt on the Old Course
WATCH: Haotong Li hits the wall at The Open
Day 1 takeaways at The Open
Tough start for Tiger at St Andrews
Second-round tee times for The Open
How Rory squeezed everything out of his Open first round
Cameron Young torches the Old Course
Alex Noren must be kicking himself after missing Open
Asian Tour offers LIV Golfers ranking points opportunity
Justin Rose withdraws from Open at last minute
Weather at St Andrews is way too nice for those who like carnage
Why a St Andrews Open just hits different
15 St Andrews landmarks you need to know
R&A fires warning to LIV Golf players
Lee Trevino outshines Tiger and Rory
Tiger’s tweak ahead of the Open Championship
Jack Nicklaus honoured in St Andrews
The 15 best battles for the Claret Jug at St Andrews
Tiger hits JT where it hurts
LIV Golf to discover OWGR fate
PGA Tour under investigation over LIV Golf
Spieth shoots down LIV Golf rumours
The top 100 players at St Andrews rated
A poignant return to St Andrews
Record prize money at 150th Open Championship