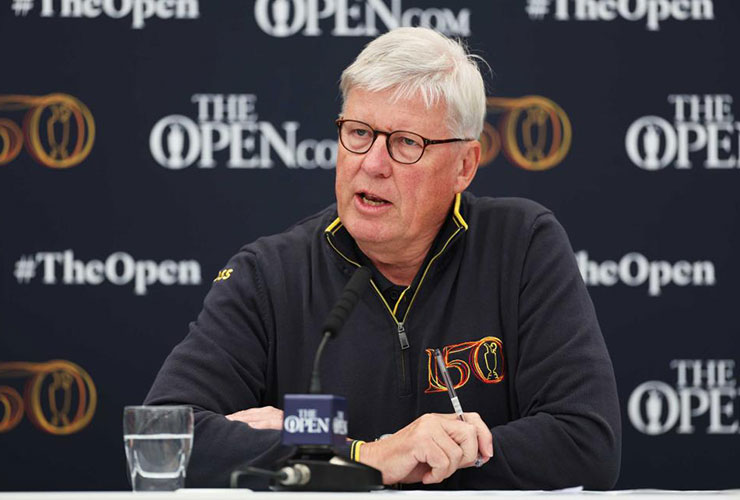 Martin Slumbers, Chief Executive of the R&A, speaks during a press conference on Wednesday at St. Andrews. Oisin Keniry/R&A

R&A chief executive Martin Slumbers chose to address the ongoing LIV Golf saga during his pre-tournament media conference ahead of the 150th Open Championship at St Andrews on Wednesday.

Slumbers stressed the freedom of golfers wishing to play where they wish, but warned there is “no such thing as a free lunch”. He made it clear there would be no banning of LIV Golf players in the future from the Open, but that the R&A would consider changes with its qualifying.

“Looking ahead to The Open next year, we have been asked quite frequently about banning players. Let me be very clear that’s not on our agenda,” Slumbers said. “But what is on our agenda is that we will review our exemptions and qualifications criteria for The Open. And whilst we do that every year, we absolutely reserve the right to make changes as our Open Championships Committee deems appropriate. Players have to earn their place in The Open, and that is fundamental to its ethos and its unique global appeal.”

The PGA Tour has indefinitely suspended players who have competed in LIV Golf events. The DP World Tour suspended a handful of players who played as well for three tournaments and fined them £100,000 — a suspension that has had a stay after players such as Ian Poulter appealed in the courts and were therefore clear to play in last week’s Scottish Open.

“Professional golfers are entitled to choose where they want to play and to accept the prize money that’s offered to them,” continued Slumbers on Wednesday. “I have absolutely no problem with that at all.

“But there is no such thing as a free lunch. I believe the model we have seen at Centurion and at Pumpkin Ridge (the first two LIV Golf events) is not in the best long-term interest of the sport as a whole and is entirely driven by money. We believe it undermines the merit-based nature and the spirit of open competition that makes golf so special.”

A total of 23 players who have competed a LIV Golf’s two initial events or have announced they’re planning to join in the future are playing at St Andrews this week. Earlier in the month, the R&A released a statement saying it would be unfair to have restricted any LIV players from competing in the championship. The R&A did, however, asked LIV Golf CEO Greg Norman, a two-time Open champion, not to attend ceremonial events that several past winners have participated in out of concern he would be a distraction.

Slumbers is a member of the board for the Official World Golf Ranking. On Tuesday, that body met and began the discussion about LIV Golf events being able to receive World Ranking points in the future. OWGR chairman Peter Dawson (former R&A CEO) released a statement saying that LIV Golf’s formal application was received on July 6 and is under review.

The World Rankings are used by not only the R&A at the Open Championship, but Augusta National, the PGA of America and the USGA to help fill the fields for the Masters, PGA Championship and US Open respectively.

When asked about the potential of a LIV Golf player winning the Open, Slumbers replied: “Whoever wins on Sunday is going to have their name carved in history. And I’ll welcome them onto the 18th green. This is a golf tournament. The Open is about having the best players in the world playing, and I want to see who shoots the lowest score come Sunday night.”