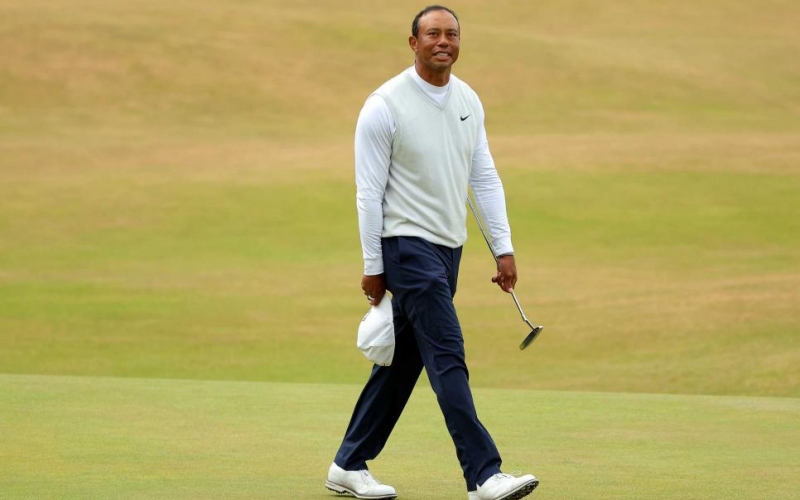 By Dan Rapaport
The party was over before it even began. Tiger Woods’ first tee shot of the 150th Open Championship found the middle of the fairway but rolled into a fresh divot. Then: gust of wind, bounce into the burn, double bogey. That famous Mike Tyson quote came to mind. Everyone has a plan until they get punched in the face.

Indeed, Woods had a plan coming into this week. Such an important plan, in fact, that he skipped the major championship prior to make sure it didn’t interfere with this one, at his favourite golf course on Earth. He began his prep on Saturday, five days before the opening round, and just kept on prepping. He looked good, too. After he walked down the first fairway on Thursday, mostly without a limp, still blissfully unaware of his ball’s fate, you wondered if, by goodness, he might be able to contend.

Almost exactly 24 hours later, on the same rectangle of turf but some 50 yards closer to town, the only question was whether he’d stop on the Swilcan Bridge for a proper goodbye.

Woods needed to shoot 66 to make the cut on Friday. Realistically speaking, 76 was far more likely. This was just his ninth competitive round since his right leg was crushed by the weight of a motor vehicle 17 months ago. All of those rounds have come in major championships, the hardest courses of the year. The last one before this came two months ago and he could hardly walk. One of his playing partners at St Andrews, Max Homa, has played 10 competitive rounds in the last 30 days.

Even Woods can’t expect to contend playing so sparingly. The rustiness showed. His lag putting was atrocious over the two days. The full swings were fine, and his body held up well, but he struggled getting that ball in the hole. Finesse, feel — the stuff that comes after hours and hours of repetition — that was virtually non-existent. He could manage only a three-over 75 on a very benign day and missed the cut by nine.

“Struggled again today to get the feel of the greens,” Woods said. “I left a lot of putts short again. Same as yesterday. And I had hit a couple of poor shots and ended up in bad spots. And, again, I just never got anything going. And I needed to shoot a low one today and I certainly did not do that. And hence I won’t be around on the weekend.”

Now what? If you take the man at his word, he will continue to fight, but not before he lets this one marinate a bit.

“I have nothing, nothing planned,” he said. “Zero. Maybe something next year. I don’t know. But nothing in the near future. This is it. I was just hoping to play this one event this year.” 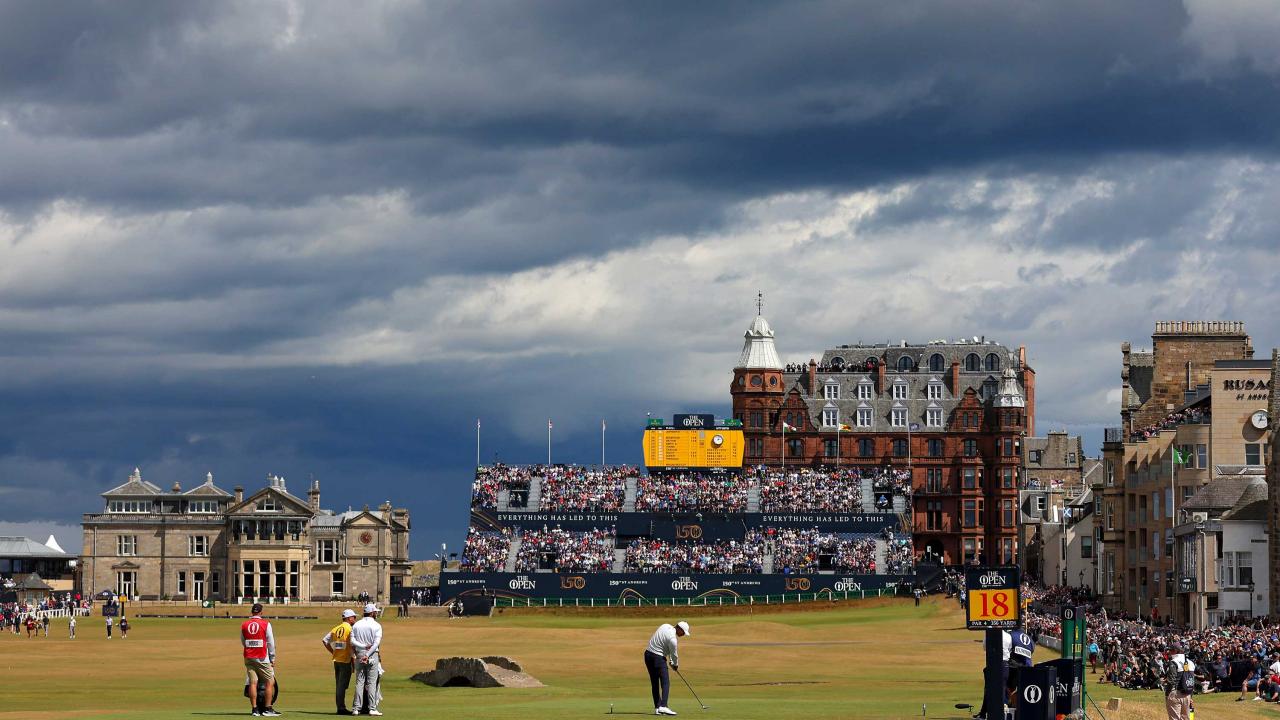 As Woods’ week was coming to a premature end on the 18th fairway, Homa and their third, Matt Fitzpatrick, looked at each other in unspoken agreement: They were going to stay the hell back, for this was Tiger’s moment. The grandstand to the right side of 1 rose to its feet, as did the one behind 18. Every balcony in sight was filled — by the elderly, the middle aged and the children, all savouring perhaps their last glimpse of a legend. Rory McIlroy, who’d just started his second round, looked over at Woods and tipped his cap. He didn’t have to say anything; in this game, a tip of the cap is worth 10,000 words. Justin Thomas, Tiger’s best friend/little brother, took a similar approach when he caught Woods’ eye shortly thereafter. They weren’t the only players to acknowledge Woods on his walk back toward the clubhouse. The Old Course is always two-holes wide, and with no trees serving as barriers, you see the guys on the opposite side of the course quite often. If this was the last time they’d see him, at St Andrews or at all, they wanted Tiger to know what he means to this game. It touched him deeply.

“It’s very emotional for me. I’ve been coming here since 1995, and I don’t know when — I think the next one comes around in what, 2030 — and I don’t know if I will be physically able to play by then,” said Woods, noting the speculated date of the next visit to St Andrews by the R&A. “So to me it felt like this might have been my last British Open here at St. Andrews. And the fans, the ovation and the warmth, it was an unbelievable feeling.

“I understand what Jack [Nicklaus] and Arnold [Palmer] had gone through in the past. I was kind of feeling that way there at the end. And just the collective warmth and understanding. They understand what golf’s all about and what it takes to be an Open champion. And I’ve been lucky enough and fortunate enough to have won this twice here. And it felt very emotional, just because I just don’t know what my health is going to be like. And I feel like I will be able to play future British Opens, but I don’t know if I’ll be able to play that long enough that when it comes back around here, will I still be playing?”

Both Palmer and Nicklaus stopped on that Swilcan Bridge — Palmer in 1995, Tiger’s first Open, and Nicklaus in 2005, Tiger’s second Open victory — when they knew they were crossing it for the last time. Woods does not know that yet, and so he went with a halfway approach: he took his cap off just as he stepped onto the bridge, but he did not break stride as he walked over it. This will not be his last major championship, perhaps not even his last at St Andrews.

But has he contended for the final time?

We don’t count Woods out because you simply don’t count him out, but this is a different ballgame from 2019. He had plenty of speed back then. He moved crisply. Most importantly: He played 19 tournaments the year prior. Yes, some older guys have used guile to contend in Open Championships well past their primes. But those guys — Greg Norman in 2008, Tom Watson in 2009 — they were playing regularly in some capacity. Woods simply cannot do that. He knows he needs to if he wants to stay competitive, but he cannot.

“I understand all that,” Woods said. “I understand being more battle hardened, but it’s hard just to walk and play 18 holes. People have no idea what I have to go through and the hours of the work on the body, pre and post, each and every single day to do what I just did. That’s what people don’t understand.”

We don’t understand because he doesn’t show us. Woods is fiercely private in that way. There will be no ice bath videos on Instagram. He pops his head into the public sphere when he has something meaningful to say. It’s entirely possible — probable, even — that, clandestine photos aside, we will not see him until he plays in the PNC Championship with Charlie, or the Hero World Challenge with his friends, or both, or neither. The PGA Tour would likely give him a cart if he asked for it, which would allow him to play more often, but he would never ask for it. There will be no shortcuts. If that means he doesn’t reach the finish line he once imagined he’d cross, so be it.

Woods will do everything in his power to strengthen that herky-jerky right leg. Whatever excruciatingly painful treatment he needs, he’ll get. Whatever tools money can buy, he will. That he can walk, let alone play 18 holes of championship golf, counts as a minor medical miracle. But he is not satisfied with what he did this week: shooting 78-75, thanking the crowd for their unwavering adoration and boarding the PJ home. At least, that’s what we thought. He has said umpteen times that he has no interest in becoming a ceremonial golfer. Watching him over the last two days, he looked suspiciously close to being exactly that. Still, as he walked off the 18th green after that special ovation, he was anything but angry. A touch frustrated, perhaps, but far from disgusted with himself. Hell, he was proud.

“It was a struggle just playing just the three events I played this year. That in itself was something I’m very proud of.”

Perhaps the leg will strengthen, and Woods will be able to play more often, and he’ll get sharper, and he’ll win something. It is a distinct possibility. Woods could be a healthier, better golfer in his 50s than at 46. But Woods’ mood after the round served as a sobering reminder that maybe that won’t happen. Maybe this is just how it’s going to be. He’ll play when he can, perhaps squeak by a cut, wave to the fans and transition into Elder Statesman mode. We don’t know, and neither does he. Remarkably, he seems perfectly fine either way.

You may also like:
The Open: Day 2 Championship takeaways
WATCH: Poulter’s record putt on the Old Course
WATCH: Haotong Li hits the wall at The Open
Day 1 takeaways at The Open
Tough start for Tiger at St Andrews
Second-round tee times for The Open
How Rory squeezed everything out of his Open first round
Cameron Young torches the Old Course
Alex Noren must be kicking himself after missing Open
Asian Tour offers LIV Golfers ranking points opportunity
Justin Rose withdraws from Open at last minute
Weather at St Andrews is way too nice for those who like carnage
Why a St Andrews Open just hits different
15 St Andrews landmarks you need to know
R&A fires warning to LIV Golf players
Lee Trevino outshines Tiger and Rory
Tiger’s tweak ahead of the Open Championship
Jack Nicklaus honoured in St Andrews
The 15 best battles for the Claret Jug at St Andrews
Tiger hits JT where it hurts
LIV Golf to discover OWGR fate
PGA Tour under investigation over LIV Golf
Spieth shoots down LIV Golf rumours
The top 100 players at St Andrews rated
A poignant return to St Andrews
Record prize money at 150th Open Championship