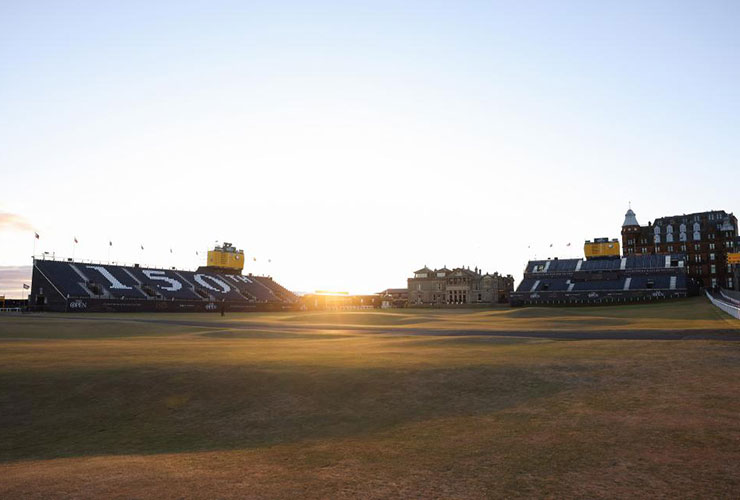 By Joel Beall
It never gets old, the Old Course. All of it but especially its end. As many times as it’s broadcast on television, or framed in clubhouses around the world, or visited by those lucky enough to make the pilgrimage, the convergence of course and town and villagers and history is so picturesque and poignant it seems too perfect to be true. But this writer put his hand against one of the myriad buildings that line the street that hugs the 18th hole as well as the stately redstone Hamilton Grand that sits behind the green and the temporary grandstands that sit between the two, and we can happily report the scenery is not an elaborate cardboard backdrop from a movie set.

Judging by the grins and spirited chatter of those who milled in the area, or from the players and caddies who look up and down and around when they make their ways up to the green, they feel the same way.

Some things really are that good.

It is easy to be romantic about an Open Championship at St Andrews. It can be cheesy and cliché, but that doesn’t make it any less true. Let’s be frank, golf could use a little romanticism right now. Unless you are a fan of chaos, the current state of the professional game has been a drag.

However, while the negative warrants focus and attention and analysis, so does the positive, and at the 150th celebration of this championship, golf is soaking in some much-needed and much-deserved positive vibes.

“It’s hard to believe it’s more historic, but it really is. It does feel like that,” Tiger Woods said. “This does feel like it’s the biggest Open Championship we’ve ever had.” 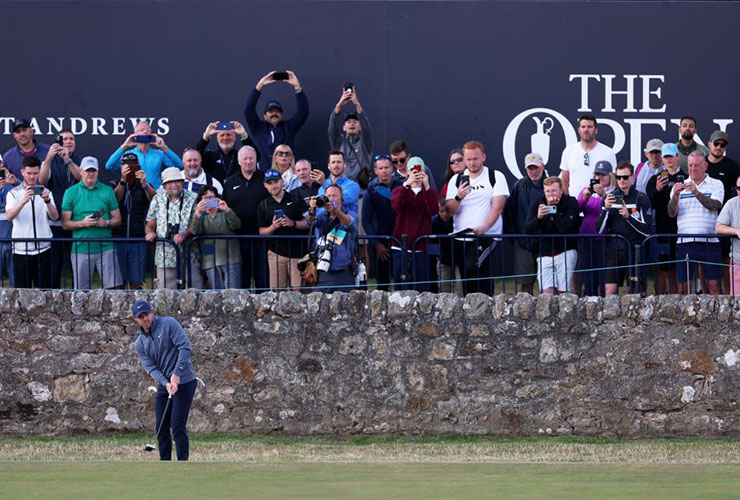 “The excitement level this week is obviously off the charts,” Will Zalatoris said. “This is a lot of fun.”

Those sound like throwaway soundbites, but it’s hard to stir professional golfers. Their job is a game, yet it is still a job and most tend to treat it as such. But while there is a competition to be played, there is also a child-like joy not seen at other tournaments, because in an exceedingly paint-by-numbers game they are being asked — maybe the best phrase is required — to paint outside the lines this week. Precision and power, the two tenets of the modern game, take a backseat to vision, artistry and feel.

“I think physically I feel more freed up. I feel that, I think they kind of go hand in hand as far as, like, picking out the shot, enjoying the creativity of the shot or putt,” Jordan Spieth said. “Instead you’re like, OK, I have the wind here, the hill here. I’m going to hit a … it kind of frees you up to be a little more feel-oriented, and I really enjoy that aspect of it.”

They marvel at the sky, watching flags in perpetual extension, and though the Open is played on the ground, the air cannot be ignored. The challenge is knowing when the wind is friend or foe … or recognising it can be both. “It’s not the same as the States to where it’s like I’m going to hit this or this off this tee pretty much no matter what. It’s, like, if it’s into the wind, it’s this; if it’s downwind, it’s that,” Justin Thomas said. “[There are] 18 holes out here that can totally change your line, your strategy and thinking overall based on the wind direction.”

They marvel at the grass, or what we believe is grass. The reason greens are called “greens” here is they are the only things relatively green on the course. The fairways, rough and heather are a brownish-yellow, and while that is an aesthetically pleasing contrast to the royal-blue grandstands that dot the property, the burnt-out surfaces look and feel and play like concrete. Scottie Scheffler believed the grounds are so hard that the fairways are running faster than the putting surfaces, and Spieth noted it’s difficult to hold the fairways, a problem because if you’re not in the fairway forget about holding the green. “From there, if you’re not playing out of the short stuff where they put the pins, the best you can do is 30, 40 feet,” Spieth said.

They marvel at the obstacles in their path, the 112 bunkers they must avoid, the mounds that will ricochet their balls into trouble or safety, the loop where they could go low or could be ejected, the hotel they must somehow hit over or around. They go back and forth between putter and wedge from 40 yards away from the green, discovering, always, the putter is the call. They try to strategise for a course that has a habit of blowing strategy into the North Sea. As Rory McIlroy remarked: “It’s going to be a game of chess this week.”

The tournament itself is overflowing with storylines. Tiger is here, and any notion that he’s here as a ceremonial figure is disputed by the amount of time and effort he’s investing. At Augusta National and Southern Hills, he limited pre-week wear to conserve as much energy as he could. At St Andrews, he is using it all up. It doesn’t mean he will necessarily contend, but it hints he could, and more importantly, that he thinks he can.

There is McIlroy, trying to avenge a St Andrews start taken away in 2015 (his foot in a boot from a kick-about injury) and proving he can still be the golfer he was back then. There is Spieth, who was this close from completing the third leg of the Grand Slam that same year before the Road Hole had other plans. There is Zalatoris, looking to turn those silver medals into gold; Scheffler, attempting to seal an all-time heater season; Thomas, who can jump from the very, very good to possibly generationally great.

In that same breath there were other majors this year and they weren’t short on narratives or drama, and to various extents other rota courses have their idiosyncrasies and wind, their bunkers and moon surfaces. Why is this so special?

The overly simplistic answer, anniversary aside, is it’s just different here. You don’t earn the “Home of Golf” moniker lightly. You feel it with every interaction and every conservation, where the past feels very present. Everyone knows it’s heaven, and everyone can’t believe they got in.

You hear it in the crowd. At the 18th crossing, a marshall implored: “Please, over here, all drivers to the left, even the drunk ones.” A man who, truth be told, looked like he had enjoyed a few pops, yelled out: “You haven’t seen me drunk!” To which the marshall replied: “If this is you sober, I’m sure I don’t want to see it,” leading to a round of cheer.

You see it in on the village streets, where individuals in ties and coats pass by those in swimsuits heading to the beach, who pass by those carrying golf bags, and somehow everyone is appropriately dressed. Or how the course spills into town, and no matter what hostelry you duck into it feels like half the 17th grandstands decided to join. It’s about the easy access to countless links in the area, all of which seem to have an open spot for the weary hacker looking to chase the sun. 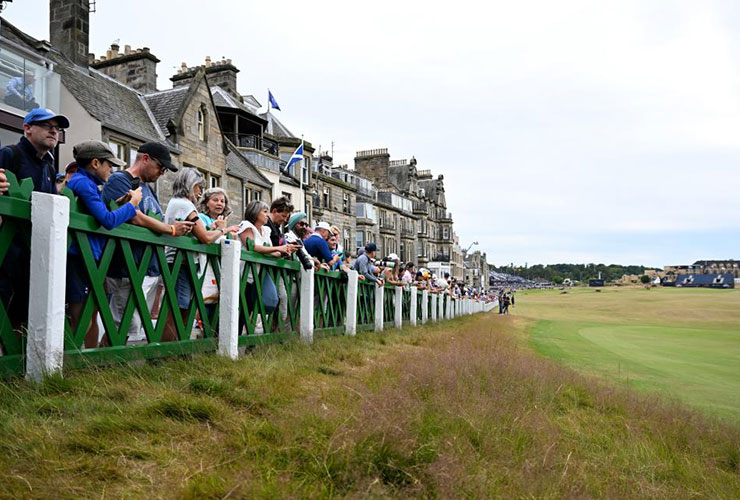 Crowds gather at St Andrews ahead of the 150th Open Championship. R&A

It is a place that turns atheists into believers, and cynics into dreamers. There is even a rumour that Tyrrell Hatton was caught smiling. So few things live up to expectations that when they do you don’t know what to do with yourself.

Driven home by the amphitheatre of the 18th. You can see the buildings and grandstands that engulf it from nearly every point of the links. It shines brighter and signals safety more than any lighthouse could. As McIlroy finished up his practice round at the 18th green Wednesday morning, a group of fans asked if they could get their picture taken on the crossing as the Ulsterman rolled putts in the background.

“Didn’t we get photos here yesterday?” one in the party asked. “Yeah we did!” replied a 50-something-year-old kid. “And we need more!” When the photos were done, the man said to no one in particular, “God, I could stay here all day.”

What can we say? This place never gets old. Good things never do.