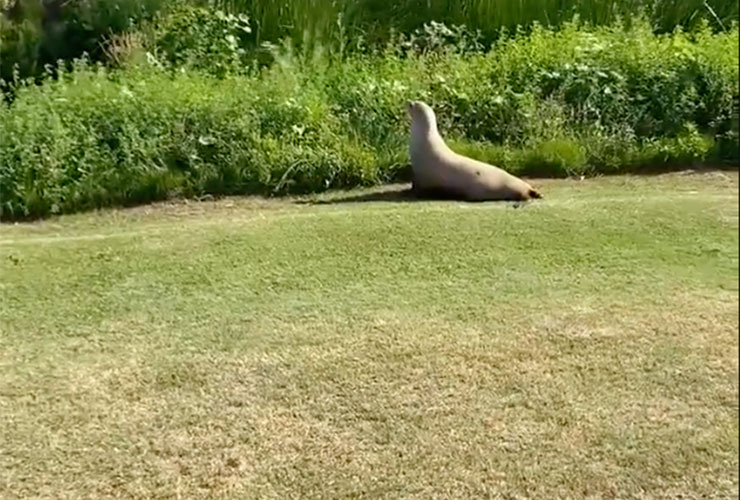 By Alex Myers
At a golf course known for a few Tiger triumphs, there was a sea lion sighting on Thursday. Yes, a sea lion. And, yes, that’s a first for The Loop when it comes to covering golf wildlife.

The marine mammal was spotted at the Omni La Costa Resort & Spa in Carlsbad, some three miles away from the ocean. Have a look, and note that despite the tweet, it’s a sea lion and NOT a seal. Apparently, there’s a maritime Twitter ­— and it wasn’t happy about that:

A Seal was seen wandering through the Omni La Costa Golf Course. pic.twitter.com/sK3GNwiHBF

Pretty amazing. Although, not quite as amazing as the fact my parents live right there and I heard about this first. By the way, sea lions differ from seals in that they walk on land, bark loudly, and have visible ear flaps. Thanks, Google.

And to continue our science lesson on what’s the last day of school in many parts of the country, it turns out that pregnant sea lions like to seek land. They just don’t usually wind up on a golf course three miles from the ocean.

La Costa was the longtime host of the PGA Tour’s Tournament of Champions before the event moved to Kapalua in 1999. Tiger Woods won the event in 1997, and later won the WGC-Match Play there in 2003 and 2004. The course has also played host to the LPGA Tour.

Reports indicate the sea lion didn’t walk all that way, but rather took advantage of high tide to get into a nearby lagoon. After it was spotted, La Costa called nearby SeaWorld and rescue workers were sent.

“The team was able to safely get her on the rescue truck and transport her to the Carlsbad State beach to relocate and return her back to the ocean,” Tracy Spahr, a publicist with SeaWorld, told NBC 7. “She looked in good health, and, due to her pregnancy, the ocean is the best location for her to be and give birth when she is ready.”

Good to hear. We just hope she got to finish her round.