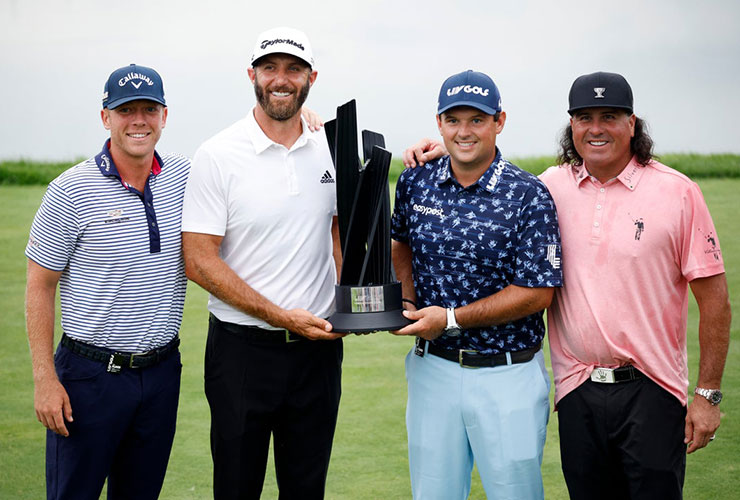 By Matt Smith
Patrick Reed has plenty to smile about lately as he and his LIV Golf 4 Aces teammates have established themselves as the ones to beat after three events of the inaugural Invitational Series.

The American joined up with compatriots Dustin Johnson, Talor Gooch and Pat Perez following the opening competition at Centurion Club just outside London — and it looks like they have found a winning combination.

In the two events since LIV Golf headed stateside from England, 4 Aces have dominated the team proceedings. In Portland, the all-American team won by seven strokes. At Bedminster, it was eight.

With major winners DJ and Reed finishing in the top five at both events for a combined 34-under for six rounds, it is clear to see what is working for 4 Aces. But there is more to it than just two of your four players delivering the scores that matter.

Reed is competing at the Asian Tour International Series in Singapore and South Korea before the LIV Golf festival arrives in Boston on September 2, and he says he is not surprised at 4 Aces’ success as they take aim at three victories on the trot.

“You have a player the calibre of DJ and myself as a 1-2 punch,” he told LIVGolf.com. “You’ve got a guy like Talor Gooch, who’s playing some solid golf and is an amazing player. And you’ve got Pat. Pat’s streaky. He can get hot pretty quick. The biggest thing is even when Pat’s not having a good day, he has the attitude to pick anyone up, no matter how the day is.

“We have the right kind of morale around these guys. Really, right now, with how we feel and how our game is, our mindset is to go out and win, and win often. Let it ride. I just feel like with this group, nothing’s going to keep is down.”

More telling, 13 of those rounds were under par — the other was even — while other teams have been crippled by multiple players having high scores. Cumulatively, the foursome’s 14 counting scores add up to 48-under.

Reed also revealed that it was close friend Johnson who convinced him to join LIV Golf.

“I was on the fence whether I was going to play or not,” said Reed, who is one of 22 LIV Golf members playing in this week’s International Series Singapore on the Asian Tour, “and DJ was like, ‘Hey, man, you have to.’ The relationship that DJ, Paulina, myself and Justine have … well, when he said, ‘Hey, it’s unbelievable out here’ when he was in London, I was like, ‘Yeah, we’re coming.’”

While Johnson and Reed missed on in the individual competition to debutant Henrik Stenson at Bedminster, they were both checking the leaderboard and the 4 Aces’ battle with Stenson’s Majesticks team.

For Johnson, that’s part of the allure of LIV Golf.

“Obviously, I know how I’m doing, but I’m always checking to see how the guys are playing,” said Johnson, who captained Oliver Bekker, Shaun Norris and Kevin Yuan to a fifth-place finish in the inaugural LIV Golf Invitational London. “I really enjoy it. … There’s a lot more camaraderie with the guys. We’re all playing at the same time, so we’re all warming up together, we’re eating together. You just spend a lot more time with the guys, and I think it’s a lot of fun.”

Asked if he could see 4 Aces GC running the table the rest of the season, Reed said he could. “Because of how the guys are playing and how we’re supposed to play, we definitely have a chance,” he said. “We just don’t want to break up this team,” he said. “We want this team to stay together and have the 4 Aces keep it going.”