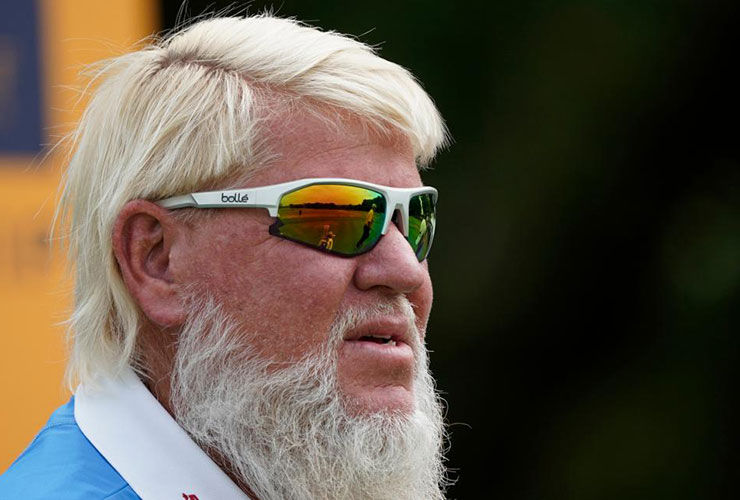 Cameron Smith just won the Open Championship at St Andrews two weeks ago via a final-round 63 and the mulleted Australian hoisted the Claret Jug at the Old Course after capturing his first major championship. Shortly after he was asked whether he’ll be joining the LIV Golf circuit and, while he didn’t say yes, he didn’t say no either.

Meanwhile, another man who is known for various stages of mullets, who also happened to win an Open at St Andrews, has said that he does want to play in the LIV Golf series, but was essentially told there was not enough room for him.

John Daly sat down for an interview last week on ‘Piers Morgan Uncensored’ and told the host that he would love to play in the series. The upfront money appealed to him and he loved the idea.

“I begged Greg Norman to let me be on the LIV tour,” Daly said. “You know, we work really hard. I played with Brian Harman in a practice round and some other guys in the practice rounds at the Open and it’s like we play pro-ams. We get it, OK? That’s what is the backbone of a lot of our tournaments. But, Brian Harman says: ‘Give us a box of chocolates for the effort.’

Daly, 56, was asked specifically if he knew why Norman would not allow him to play in the LIV series.

“Well, Greg says he’s not doing any more and I’m too old, so,” Daly responded.

Daly did leave the conversation on a positive note though and wanted peace between the PGA Tour and LIV Golf. He’s not a big fan of the consternation that’s hovering over game at the top level.

“To sum this up I wish every tour would get along where everything could work out,” Daly said, “because golf is such a great game”.

Daly missed the cut in both the PGA Championship and the Open this year. He’s played in 11 events on the PGA Tour Champions and his best finish is a tie for eighth place at the American Family Insurance Championship.

You may also like:
Get the August 2022 edition of Golf Digest Middle East FREE here in English and Arabic
Mickelson was suspended by PGA Tour in March; banned for two years
Mickelson and Dechambeau lead group of 11 LIV golfers suing PGA Tour
Adam Hadwin in trouble with wife Jessica — again
LIV Golf gives to local charities in New Jersey
Bryson DeChambeau on LIV/PGA feud and his $125m signing-on fee
What it is like to be the first woman from your country to win a title
Five players to watch at the AIG Women’s Open
Australian army target more glory in Scotland
Laura Davies’ unique return to Muirfield
Phil Mickelson becomes highest-paid athlete of 2022
WATCH: LIV Golf highlights from Bedminster
Stenson takes debut LIV Golf title at Bedminster
LIV Golf takeaways after third event in New Jersey
The Gulf Club: Latest news from the UAE and beyond up to August 2022
Crocker takes the glory at Hero Open