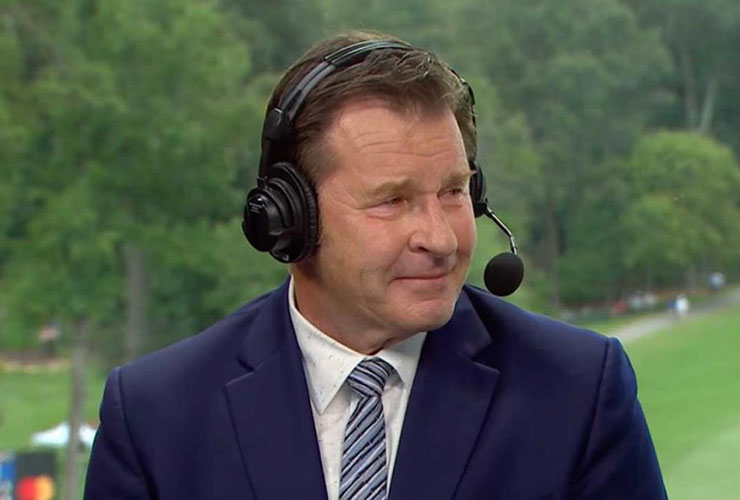 By Ryan Herrington
There was a symmetry to Nick Faldo making the Wyndham Championship his final broadcast as an analyst for CBS Sports. It was the same tournament 43 years earlier that the six-time major winner made his tour debut as a player, the event then known as the Greater Greensboro Open.

While Faldo had roughly two months to prepare for his last goodbye since revealing he would be ending his TV career after nearly two decades, the emotions of the moment on Sunday still got the best of the 65-year-old.

The end of an era.@NickFaldo006 signs off for the final time. pic.twitter.com/nXm8mRMPnz

“I blew it,” the Englishman said amid heavy tears. Once finally composed enough to speak, he recalled the day he was offered the job at CBS. “I was in a boat in Ireland, and they gave me a call and said, ‘How would you like to sit next to Jim Nantz?’ and I literally fell out the boat, I really did. That was 2006, and here we are 16 years later.”

Throughout Sunday’s broadcast — the last golf tournament on CBS’ 2022 calendar — the crew took time to salute Faldo for his years of work.

“I think it’s fair to say that you let us see as a broadcaster what’s in your heart, much more than we did with your stoic manner as a player,” Nantz said. “May the sands of time be very kind to you, my friend.”

Earlier in the week, Faldo’s connection to Greensboro only grew stronger. Tournament officials honoured him with a spot on Sedgefield Country Club’s Wall of Fame, joining Charlie Sifford and Arnold Palmer.

16 seasons of smiles and laughter.

The best and funniest moments of @NickFaldo006’s broadcasting career in honor of his retirement. pic.twitter.com/BpAQ1O2aAU

Faldo will spend his retirement in Montana, where he and his wife Lindsey are renovating a farm.

“To the crew, as I affectionately and respectfully call you the workers. They put the pictures out, we do all the rattling, the easy job,” Faldo said at the broadcast’s end. “Thank you all. I’m a single [inaudible], but I’ve found these three brothers. Thank you. Thank you. I’m ready.”