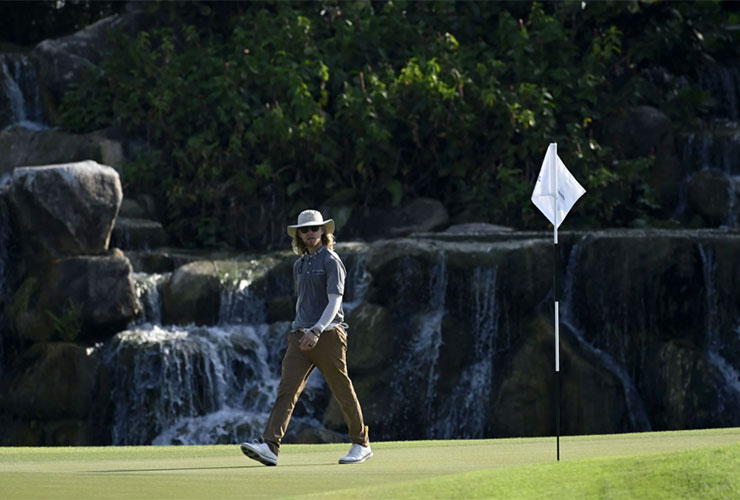 By Matt Smith
Scott Vincent, known as one of the most likeable guys on the LIV Golf and Asian Tours, is busy making another name for himself as once again he finds himself leading the way in the Asian Tour’s International Series. The Zimbabwean fired a stunning bogey-free eight-under 64 in the opening round of the $1.5 million event at Singapore’s Tampines Course at Tanah Merah Country Club.

He took advantage of an early start on Thursday to surge into a three-stroke clubhouse lead, with Thailand’s Sadom Kaewkanjana, Tirawat Kaewsiribandit and Korean Kyongjun Moon carding 67s in the stifling heat. Another LIV Golfer, Phachara Khongwatmai, also managed to get to five-under and Vincent’s brother Kieran returned a 68 along with Americans Dodge Kemmer and Turk Pettit, Australia’s Todd Sinnott, Japan’s Jinichiro Kozuma, Janne Kaske from Finland, Nitithorn Thippong from Thailand, and Vietnam’s Michael Tran.

Of the afternoon starters, Gavin Green managed to get within touching distance of Vincent thanks to another bogey-free round, his 65 taking him to second spot on his own on seven-under.

“It was a great day, just got off to a really nice start, and then the momentum just kept going. As I have said before I am just out here trying to be a little better each day,” said Vincent. “Today was a really good day, a lot of things went my way, a lot of putts went in, so it was a good challenge trying to stay present and stay in the moment and enjoy each stage and not get too far ahead. Yeah, so that was the big challenge today and the golf was phenomenal.”

Not everything went Vincent’s way though as on the par-three sixth he hit what looked like a great tee shot that was zeroing in on the pin but hit his playing partner American Sihwan Kim’s ball. “Sihwan hit a shot to about three feet – that was the real problem,” he said. “My shot came in and pitched on his ball and then kicked all the way back [about 30 feet]. I was fortunate to walk away with a par there but a nice little challenge there for me trying to finish my round. I was happy to walk away with a par.” Sihwan, who currently leads the Asian Tour Order of Merit, returned a 71 – impressively bouncing back from a torrid four-over first nine, with a five-under second nine.

Major winner Patrick Reed was not so fortunate as he struggled to a one-over 73 in the heat and humidity on his first visit to Singapore.