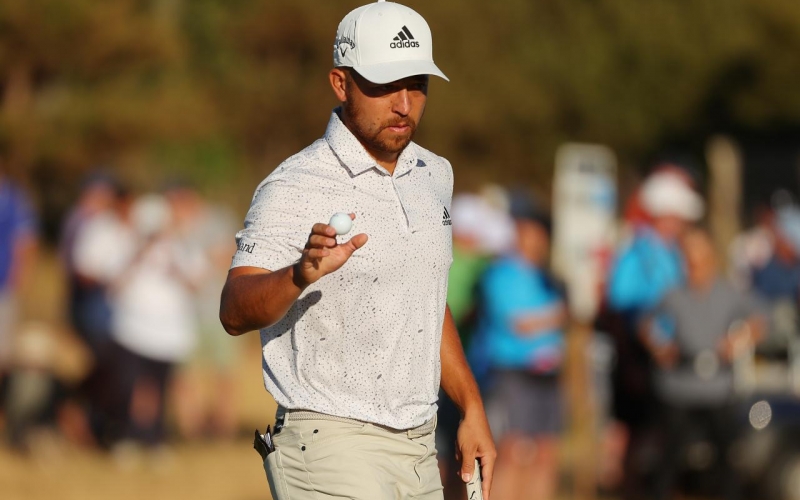 Xander Schauffele reacts after making a birdie putt on the 16th hole during the final round of the Scottish Open. Kevin C Cox

By John Huggan
Two shots ahead with 18-holes to play in the Genesis Scottish Open, Olympic champion Xander Schauffele was a strong favourite to claim his third PGA Tour victory of the year at the Renaissance Club on the southern shore of the Firth of Forth.

And so it proved. Eventually.

The 28-year old Californian’s closing 70 was just good enough to see off a cast of challengers headed by eventual runner-up Kurt Kitayama. Schauffele’s 72-hole aggregate of seven-under 273 was one shot better than his fellow American and earned him $1.4 million. Joohyung Kim of Korea pulled up in third place, undone by three putts on an 18th hole that not one of the 72-strong field managed to birdie during a blustery final day.

That all sounds pretty straightforward, albeit close by the end. But it wasn’t. Straightforward that is. Suddenly four shots clear after birdies at each of his opening two holes, Schauffele was one behind by the turn courtesy of three bogeys in four holes from the sixth.

The shot he dropped on the ninth was, however, his last mistake until he made five on the par-4 18th. Coming home, he morphed back into the steadily cool customer who had built that overnight advantage. Birdies on the 13th and 16th — and a crucial eight-foot putt for par on the par-3 17th — provided the cushion that allowed him the luxury of a bogey on the brutally difficult 18th.

On Saturday evening, Schauffele had talked of not thinking “too far ahead”. But he also admitted that a win in Scotland would be “very nice” and evidence that his game “can travel.” All of which proved prescient, given how the final round panned out.

“This is a big sense of relief,” he said. “I was not playing very well. I came out of the gates very nicely and kind of hit a wall and was looking a bit sketchy for a little bit. It’s what links golf promotes, getting the ball in the hole. I was telling myself that it doesn’t really have to be pretty. And it wasn’t. But I got the ball in the hole and one better than everyone else. And once that par went in on 17, I knew I could lag it up there on the last.

“All in all, it was a very stressful day and this is very rewarding. At the turn I was just trying to find something. So it was nice to hit some better shots down the stretch and calm the ship. This one is extra special because of that.”

As for the man in second place, although ultimately disappointed, Katayama was philosophical about his second runner-up finish on tour this year.

“It was really exciting,” he said. “I feel like just being in contention is always a good spot. You get those nerves and those feelings and excitement and it’s just a lot of fun.”

Of course, Kitayama has some history on the DP World Tour. A graduate of the second-tier Korn Ferry Tour Finals in September last year, the Californian has played most of his golf at home on the PGA Tour this year. But he is no stranger to what was the European Tour. Having sailed through all three stages of what was then the Qualifying School, the former University of Nevada-Las Vegas student won his third tour start, the 2018 Mauritius Open. He then picked up his second victory only eight starts later when he claimed the 2019 Oman Open title. No one has won their first two events on the European circuit in shorter order.

“It was great to come over here and play,” he said the new champion of his time on this side of the Atlantic. “It was a new experience for me as a person. Learning how to travel and how to manage everything you can only get better. I definitely learned how to play different courses, especially links.”