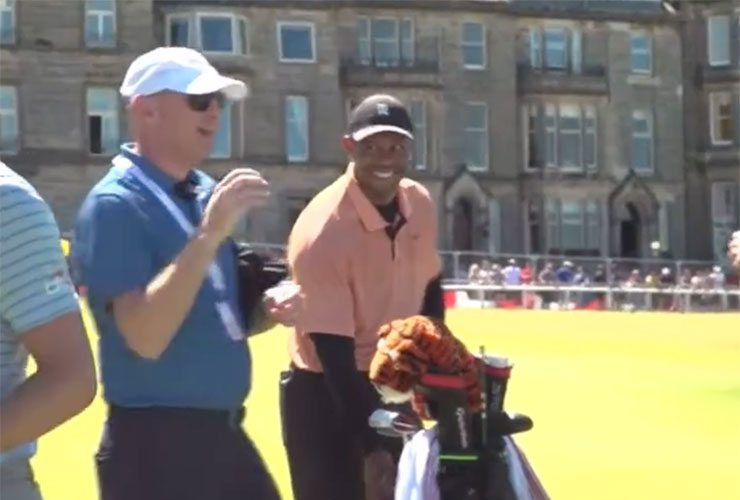 By Alex Myers
Tiger Woods and Justin Thomas have enjoyed their own little buddies trip to St Andrews the past few days as the two stars prepare for this week’s Open Championship. It’s just the latest confirmation of how close these two golfers have grown in recent years despite their age gap. But that doesn’t mean they still don’t, to borrow a Tigerism, “give each other the needle” from time to time. And Tiger sure jabbed JT with a good one.

Before we get into that, we just want to point out that this 10-minute video uploaded to YouTube by the Open is awesome. It contains a lot of great footage of Tiger and JT playing a practice round so it’s basically golf gold that you should check out. But this little exchange as they wrapped up was definitely the highlight.

“See you tomorrow for the past winners event…oh I forgot you’ve never won here.”

Woods was talking about the R&A Celebration of Champions in which he’s participating as a three-time winner of the Claret Jug. Of course, JT took it in stride, firing back with some expletive. But he might actually be a bit jealous of Tiger teeing it up in the exhibition alongside another younger buddy, Rory McIlroy. Just saying.

On the bright side for Justin, if he wants to watch, we’re pretty sure Tiger could hook him up with tickets.