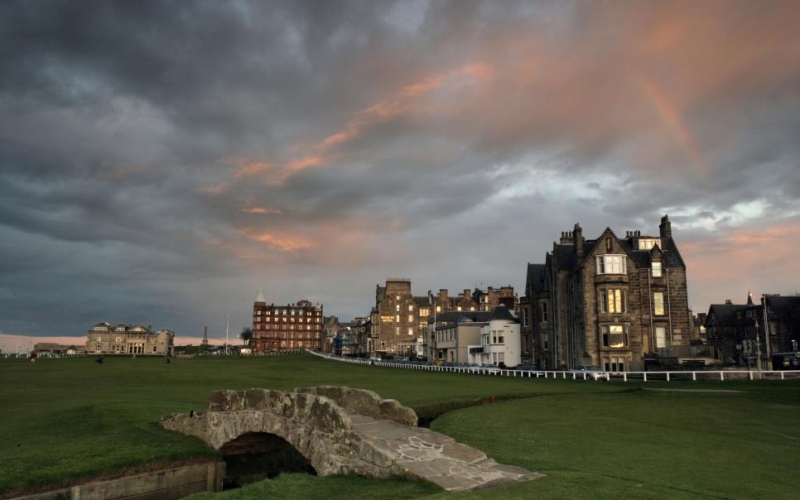 By Max Adler
The 150th Open. It’s a span of time that’s difficult to grasp. None of us has any experience of what life was like when Old Tom Morris was stuffing featheries in 1860. Although it’d be fun to tell Old Tom what Branden Grace’s caddie made last week.

I recently traveled to St Andrews ahead of this milestone Open. The trip marked 16 years since I lived there as a university student, a period when I went ‘round the Old’ nearly 150 times between playing and caddying. The local caddies — all guys named Dave, Scott, Colin, Willie and Angus — didn’t have to pass the two-hour written exam on the history of the 112 bunkers to caddie like my American-self did, which was fair. You can imagine the initial disappointment golfers experienced after traveling to the mecca only to find the caddie with their bag on the first tee was ‘Max from upstate New York’. 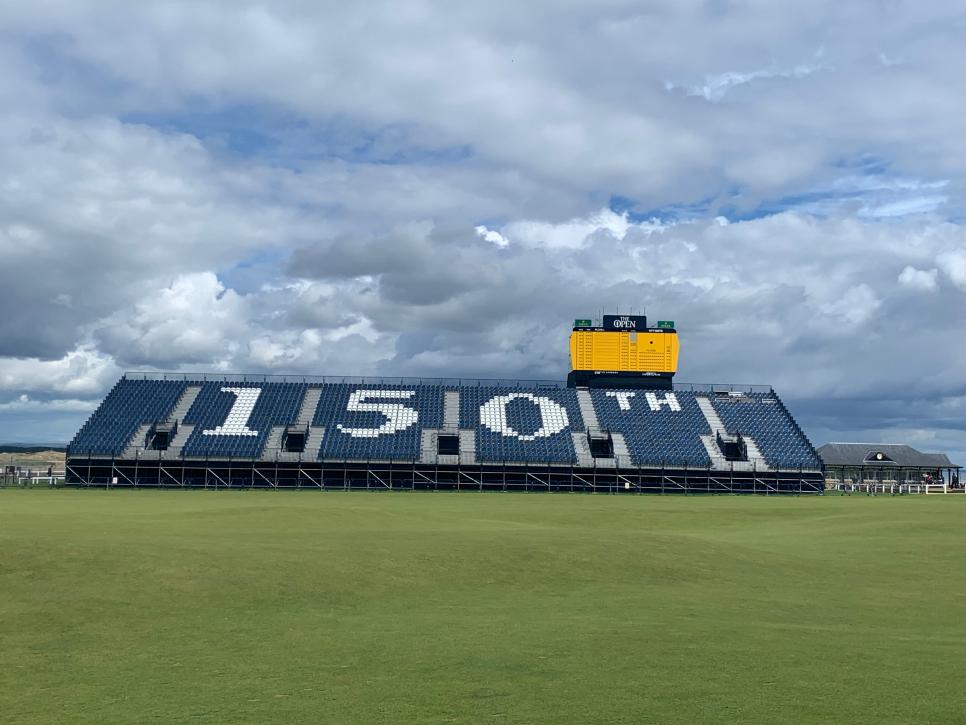 The 150th Open Championship is coming home to St Andrews

This time I returned to St Andrews with my wife, for whom I was a woeful tour guide. There are only three main streets in the city (a designation that has nothing to do with population but everything to do with having a cathedral), and I struggled to remember where all the important heretics were burned as well as some of my favorite haunts. The Castle Pub, Aikmans and The Vic Cafe are where I left them, but Ma Bells is now something called Champions Grill and PMs is no more. Where does one go for a late night haggis roll?

Before golf was even an idea there was a university here, founded in 1413, and you can’t help but wonder what they were teaching before The Renaissance. We walked past a brand new university building that looked like it’d been there forever, and got turned around by some construction scaffolding near my former dorm. Fresh masonry along cobblestone streets tricks the mind. A new stone or two here, a different paint job on a door there, and suddenly you’re not sure where your best friend’s flat was.

The golf was similar. Everybody knows The Old Course wasn’t built by a man, but by many men, and yet mostly sheep, rabbits, rain and wind. Sort of how buildings in the The Auld Grey Toon look different depending on the relative humidity, the fescue and gorse that frames the blind tee shots on The Old is unchanging except for its daily appearance. According to superintendent Gordon McKie, just the ninth keeper of the green in a lineage that dates to Old Tom, the lack of trammeling footsteps early in the pandemic allowed rough to grow high in spots it hadn’t in decades, which really affected my recollection of sight lines. Bashfully, I had to ask my caddie for help to avoid both Cheapes and Coffin Bunkers. I venture it’s more true of The Old than any course in the world: prolonged absence renews the mystery of its angles.

I’ll spare you the shot-by-shot of playing the beginner-friendly Strathtyrum with my wife — a course I never played once in my student days not because I’m a snob, but because it would’ve meant walking past the first tees of The Old, The New and The Jubilee. To be in the Eden clubhouse looking out across the revamped practice facility, I realised how ludicrous it was for me to have thought I could be any sort of tour guide to anyone. Every nook of St Andrews has a story and it would take a lifetime here to know them all.

Gary Player pointed out for us the dune in the West Sands where he slept on the eve of the 1955 Open to save money. If there were a world championship held tomorrow for 86-year-olds, Player would lap the field. The thing about life is that we all die, and Player is that rare individual who is motivated rather than limited by aging. Swinging faster at the end of his tether, as it were. Our dinner lasted until midnight and hardly anybody else got a word in. Not that we minded. The Black Knight has stories for days. My favourite involved impressing Ben Hogan so much that Hogan offered young Gary a sponsorship to play Hogan irons for $2,000 a year. It was a difficult decision, but Player had a new family to support and ultimately went with a now defunct equipment company that paid him $9,000. Hogan never spoke to him again.

When I ordered ice cream to follow my steak, of course I got a ribbing from Player, whose lectures on nutrition and fitness are a masterclass in gesticulation. “One day I will go to your funeral, young man!” In a poignant moment, Player’s animation subsided and he looked down gravely at the one small glass of Cabernet he allows himself, swirled it, and said: “I do this because I love life and I have such gratitude for every minute.” He has friends in the sciences who have reasons to believe the maximal life span of a human being could be 140 years. 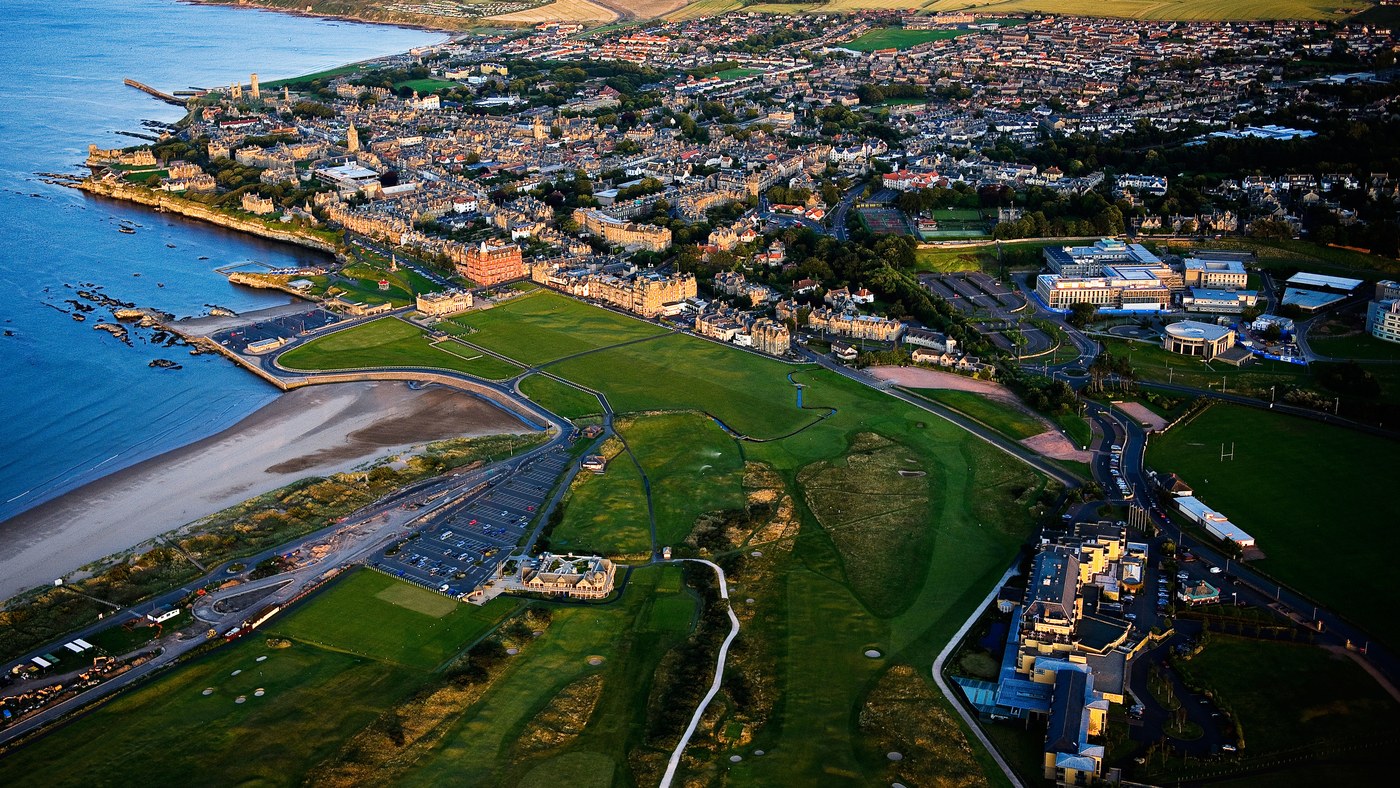 These large ideas about time reverberated when I made my selections at breakfast the next morning, and there is no better breakfast in golf than the fourth floor of the Old Course Hotel. Forget the farm-raised eggs, bacon, sausage, potato scones, beans, toast, tomatoes, mushrooms and black pudding — the view of the Old Course backed by the North Sea is … sublime. As the morning sun coming through the giant windows alights the steam of your coffee, it’s puzzling why the golfers in the 2nd and 17th fairway below are bundled in woolies and mitts. It needn’t be said that as a scholarship student once grateful for the food stipend I spent at Tesco, I never set foot in this five-star hotel. Its hallways are literally the length of a par 4 and you could spend a week studying the paintings. Fun fact: in addition to a number, almost all of the rooms are named for Open Champions.

The opposite and corresponding view from breakfast, of course, is the upstairs office of R&A Chief Executive Martin Slumbers in the Royal & Ancient clubhouse. With a grand window and balcony above the first tee, it’s astonishing he ever gets any work done. Wisely, he’s positioned his desk so as to avoid direct eye contact with the glory. Instead, Slumbers has it rigged so a stray glance will find one of two portraits of Seve Ballesteros, who hugged the Claret Jug just outside this office in 1984. Slumbers’ eyes light up on the topic of sustainability. With a fully electric fleet of mowers, solar paneling and batteries to power all tournament infrastructure, not to mention the eradication of single-use plastics, the 150th Open is far from perfect, but will send a global message about how we might get to another 150 years.

Downstairs I enjoyed a drink with Iain Pattinson, who is the Chairman of the General Committee of the Royal & Ancient Club (founded in 1754) as well as the Chairman of the Board of the R&A Group of Companies (founded in 2004). The latter licenses the Claret Jug from the former, and when you hear Pattinson explain why, you recognise his distinct voice as the golf rules commentator from BBC. For the longest time the golf club and its members ran The Open, Pattinson will tell you, and the first year they accepted any type of commercial sponsorship around the championship (don’t call it a tournament…) was 1981, when Rolex supplied all the clocks and timekeeping. While the club was initially “cagey” about a sponsor doing anything that might reflect poorly on the event, Pattinson knows as well as anyone that the prestige and reach of The Open has grown considerably in the past four decades thanks to the sorts of things only funding can do. The Group of Companies is the now separate commercial arm that deals with governance, rules, and conducting 25 championships across the world, so that the regular membership can focus on what regular members do best: play golf, eat, drink, enjoy camaraderie. Pattinson is a central link between the two groups, though his term will be over this fall. As a symbol of the success of this first and lasting commercial partnership, Pattinson points out a black and gold clock that hangs high above an entrance in the Great Room. It was a gift from Rolex in 1985, and is pulsed from a satellite so that its time is never off by a second.

Whether you’re watching the broadcast at home or there in person as one of the expected 290,000 record-breaking fans, there’s another clock to look out for: a brand new one on the side of the Rusacks Hotel. This is a clock where there wasn’t one before, and you could hit it with a wild slice off the 18th tee. For the most iconic backdrop in golf, there hasn’t been a more conspicuous change since a top floor was deftly added to the Hamilton Grand. Which was Hamilton Hall in my day. I attended the very last student party there in 2006, where the goal was to make the walls remember.

This is a monumental Open, no doubt. The weight of the 150th sits atop the threat of a new era in professional golf, which may prove to be a blip, or not. If bumbling around St Andrews gave me any clarity, it’s that to be nostalgic, to wish for what once was, is a kind of pointless sickness. Time marches on. This game, and particularly this place, has a way of preserving and honoring what matters most.

You may also like:
Rahm ready for some good breaks at St Andrews
R&A snubs Greg Norman for Open Championship celebrations
Tiger takes a stroll around St Andrews
Xander the man to watch ahead of Open Championship at St Andrews
Ciganda prevails on Ladies European Tour in Spain
Watch: Highlights from the Estrella Damm Ladies Open
Xander on his way to three in a row in Scotland
Spieth shoots down LIV Golf rumours
Ciganda on brink of wire-to-wire win in Spain
Tringale holds onto Scottish Open lead
Fitzpatrick enjoying ‘best form of his life’
Hovland reassures all weekend golfers with horrendous shank
Record prize money at 150th Open Championship
Ciganda holds halfway lead in Spain
Dubai’s Chiara Noja reclaims LETAS Order of Merit lead
Kang to miss more events due to tumour
Rory calls for LIV/PGA talks
Scottish Open is links golf at its finest
Tringale shapes up nicely at Scottish Open
Ian Poulter won’t trade jabs with LIV haters, says there’s ‘space in the calendar for everyone’
Meronk on top of the world at Mount Juliet