Open Championship 2022: The equipment tweak Tiger Woods is making to bring his stinger into play at St Andrews 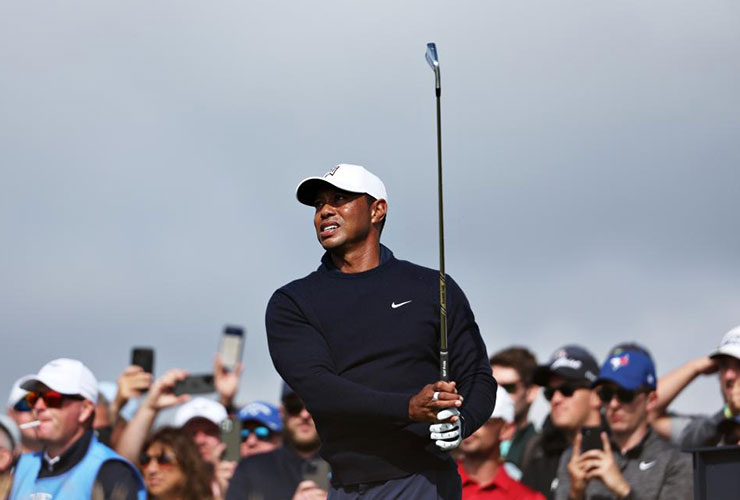 Tiger Woods tees off during a practice round with a new 3-iron prior to The 150th Open. The club is the one he’ll use to try to hit his infamous stinger shots off tees at St Andrews. Warren Little

There is perhaps no club more closely associated with one player and one championship than Tiger Woods’ 2-iron and the Open. He has unsheathed it time and time again on seaside links, carving countless stingers en route to winning his three Claret Jugs. In 2000, when he wasn’t blasting drivers, he leaned on it to help avoid every single bunker at St Andrews. In 2006 at Hoylake, it was such a reliable weapon that he hit his driver just once the entire week, shot 18-under par, and won by two.

But Woods is far from the same player he was all those years ago — a back fusion and a leg-crushing car accident will have that effect — and golf equipment has changed almost as dramatically as his body. And so he will return to St Andrews for this, his 22nd start in the Open Championship but first since 2019, without that famed chunk of metal. Woods replaced the 2-iron with a 5-wood toward the latter half of the 2010s, after his back troubles, to help him launch the ball higher. As a result, The Stinger went into semi-hibernation. But Woods knows the importance of having that shot at the Old Course to keep his ball below the Scottish wind, and he absolutely wants to be able to rely on it this week. The natural assumption would be switching the 5-wood out for a 2-iron. That assumption would be wrong.

Woods will have 13 of the same clubs and ball in the bag as he did at the Masters and PGA Championship, including the 5-wood, but will game a TaylorMade P770 3-iron, a far thicker and more forgiving model than the TW Prototype blades he plays. He can hit that club significantly farther than he could the 3-iron from the blade set, and that’s the club he’s used to hit The Stinger in practice rounds this week on the Old Course. The ball speed is somewhere around the low 150s, and with the turf as firm as it currently is — and is expected to remain for the championship — it can roll well past 300 yards if downwind. Woods had the same club in the bag at Southern Hills but has switched shafts from the True Temper Dynamic Gold Tour Issue x100 mid to the regular X100 to bring his spin rates down, which helps the ball cut through the wind.

The idea: to hit low shots that don’t give the wind a chance to do its thing. Woods relishes the opportunity links golf provides to get the ball on the ground quickly. It’s a change of pace from the norm on the PGA Tour

“You play one type of golf here in the States, where basically everything is airborne,” Woods said as part of the R&A’s brilliant Chronicles of a Champion Golfer series. “The ground is never your friend. You’re always trying to carry bunkers, carry water, place it on top of shelves, make it stop. It’s just, How high can you hit it? When you play links golf, it’s not.”

That preference runs all the way from the teeing ground to the putting green. During Tuesday morning’s nine-hole practice round, Woods spent a solid 10 minutes hitting long irons just short of the Valley of Sin that guards the front of the 18th green. He puts the ball way back in his stance and takes a glorified putting stroke, relying on feel to guide how far to bring the club back and how much pace to carry through the hitting zone. This type of golf — where one cannot just grab a 60-degree wedge and nip a one-hop-and-stopper with cut spin — is Woods’ preference, but it’s not always possible; certainly not at wet Torrey Pines or juicy Bethpage Black. But at a baked-out St Andrews, it’s essential. And such bouncy turf levels the playing field.

Links golf at its finest.@TigerWoods working on his low approach shots at #TheOpen pic.twitter.com/P46LwIRR67

“Just lucky enough to, in our sport, to be able to play as long as we are able to play late into the 40s, especially on links golf courses like this, you can continue into your 50s,” Woods, 46, said on Tuesday. “We saw Tom [Watson] have [winning an Open] on his putter to win late in his 50s. So it can be done. It just takes a lot of knowledge and understanding of how to play this type of golf. And with the fairways being fast and firm, it allows players who are older to run the ball out there and have a chance.”