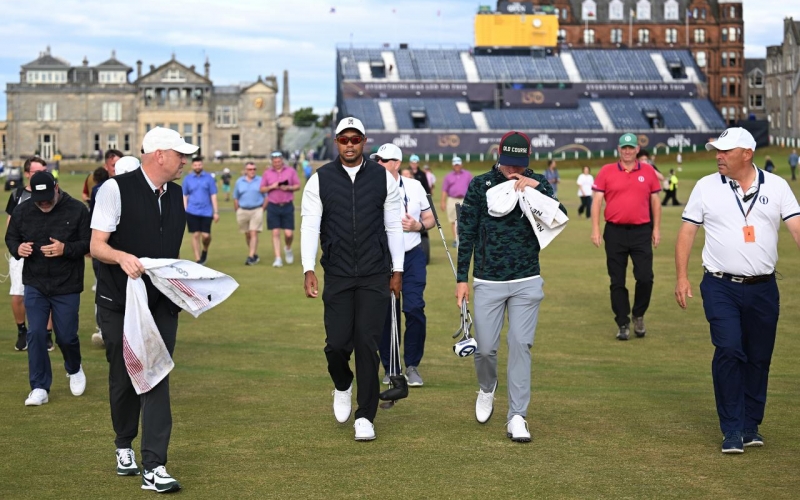 By Tod Leonard
Tiger Woods walked. He waved to fans. He hit some chips and putts. He even did some dog watching on the fairways of St Andrews’ Old Course. And all of those seemingly ordinary circumstances added up to news for one reason: The greatest golfer of his generation was back at the Home of Golf, visiting for the first time since his life was altered yet again by his car accident 18 months ago.

Accompanied by friend and fellow competitor Justin Thomas, Woods walked out onto the Old Course in the early evening on Saturday with a small entourage of associates and onlookers. On the same grounds, the 46-year-old is expected to compete in the 150th Open Championship beginning on Thursday at the site of two triumphs in which he’s lifted the Claret Jug, in 2000 and 2005.

The 15-time major winner last competed in The Open at St Andrews in 2015, when he missed the cut after shooting 76-75. Woods arrives this year with little expectations, considering he has entered only two tournaments this season — making the cut in the Masters and finishing 47th, and having to withdraw from the PGA Championship after three rounds because the pain was too much in the right leg that was badly mangled in his accident. He subsequently skipped last month’s US Open at Southern Hills.

Tiger is in town. pic.twitter.com/PKaeL2iL2j

Woods arrived in Ireland earlier in the week and played in the JP McManus Pro-Am, in which he shot 77-74 to tie for 39th. He then played a casual round on Thursday with Rory McIlroy at Ballybunion before heading to Scotland.

Woods’ schedule for Sunday is unknown. On Monday, he is set to play in the four-hole Celebration of Champions event at St Andrews with McIlroy, Lee Trevino and Georgia Hall as his teammates.

You may also like:
Xander on his way to three in a row in Scotland
Spieth shoots down LIV Golf rumours
Ciganda on brink of wire-to-wire win in Spain
Tringale holds onto Scottish Open lead
Fitzpatrick enjoying ‘best form of his life’
Hovland reassures all weekend golfers with horrendous shank
Record prize money at 150th Open Championship
Ciganda holds halfway lead in Spain
Dubai’s Chiara Noja reclaims LETAS Order of Merit lead
Kang to miss more events due to tumour
Rory calls for LIV/PGA talks
Scottish Open is links golf at its finest
Tringale shapes up nicely at Scottish Open
Ian Poulter won’t trade jabs with LIV haters, says there’s ‘space in the calendar for everyone’
Meronk on top of the world at Mount Juliet
Grace shines in Portland

Open Championship 2018: Retief Goosen earns a trip to Carnoustie the hard way, one of 12 to get in via Final Qualifying