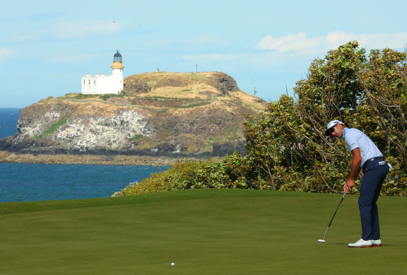 By Matt Smith
Despite the loaded field at the Genesis Scottish Open, with 14 of the top 15 in the world playing at The Renaissance Club in North Berwick, relative surprise first-round leader Cameron Tringale maintained his three-stroke lead with two rounds to go ahead of the 150th Open Championship at St Andrews.

A second-round 72 was good enough for seven-under for Tringale to enjoy a bit of breathing space over fellow Americans Gary Woodland and Doug Ghim, who shot rounds of 72 and 69 respectively.

Tringale began the day three clear of Woodland after producing a course-record-equalling 61 at Renaissance on Thursday, and stretched his advantage after starting his second round at the 10th, picking up shots on the 11th after an approach to four feet and the short 12th by sinking a 26-foot birdie putt.

By the 13th, he was bogey-free for the first 22 holes of his tournament, with 11 pars and 11 birdies, but after a first bogey arrived at the 14th, when he took three from the fringe at the front of the par three before bouncing back with a birdie on the 15th, four dropped shots in a row followed from the 16th.

He birdied the fourth but gave it back at the tricky sixth before parring his final three holes on a much tougher day than Thursday, with the wind continuing to blow on the links in south east Scotland.

A four-strong group sit one shot further behind Woodland and Ghim, and leader Tringale will be looking over his shoulder at the big names waiting to pounce.

Matt Fitzpatrick is among them. The US Open Champion was flawless until bogeys at his last two holes but he signed for a 66.

Xander Schauffele went one better and his 65 was the lowest round of the day. Joining Fitzpatrick and Schauffele on three-under are Jordan Smith — who bagged a new car each for him and his caddie after an ace at the 17th — and Kurt Kitayama.

Tringale, who is searching for his maiden victory on both the DP World Tour and PGA Tour in this co-sanctioned tournament, said: “It was definitely more difficult for me today. Yesterday, it seemed pretty easy, and today, it seemed like every hole was a grind to make par.

“I just want to keep going out and trying to play the best I can and hopefully get a good low one in tomorrow.

“I mean, the course I think is still gettable, honestly, even in the wind, I just need to play the par-fives a little better, and you know, work on those into the wind shots and I should be all right.”