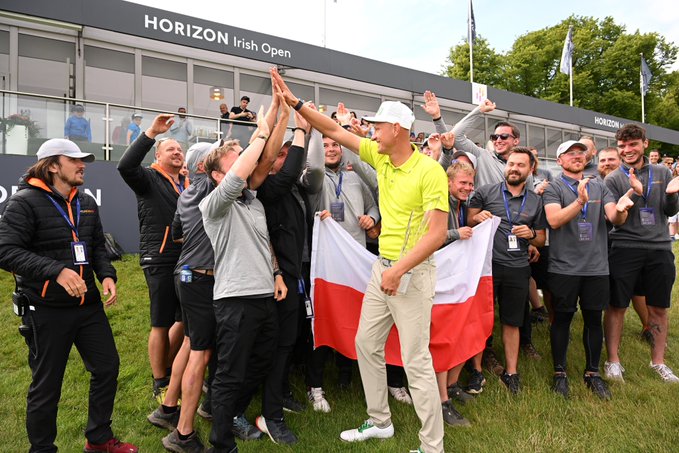 By Matt Smith
Dubai’s newest celebrity golf resident was the new champ at the Irish Open as he produced a second day of closing-hole masterclasses to win by three strokes in the DP World Tour $6 million event. The 29-year-old Pole sank a wonderful eagle on 17 to end the hopes of Ras Al Khaimah champion Ryan Fox.

On Saturday, Meronk birdied four of the last six holes to get into contention, and delivered a dream birdie-birdie-eagle from 15 to 17 on Sunday to allow himself the luxury of a relaxing stroll up 18 on his way to carding a six-under 66 and a 20-under total, before claiming his first-ever DP World Tour title.

He also made his own history as he became the first Polish winner on the tour.

Meronk began the day with a slender one-stroke lead at a sold-out Mount Juliet Estate, but found himself one behind with five holes to play after in-form Fox posted an eight-under 64 to get to 17-under.

Then the Pole delivered the biggest few holes of his career as he holed lengthy birdie putts at 15 and 16 to regain the outright lead before making a monster eagle — fist-pump included —on the long 17th to give himself a three-shot cushion and a relaxing walk up 18, roared on by 25,000 avid fans.

He safely parred the last to claim his maiden DP World Tour crown and joined the likes of Colin Montgomerie, Rory McIlroy, Seve Ballesteros and Nick Faldo in Irish Open lore — his name was being etched before he had approached the 18th, thanks to that comfy lead.

“It was so great to finally get over the line,” Meronk said. “To make this landmark is a delight and to do it at the Irish Open is amazing. It was super-amazing. The final stretch in front of these fans is one of my favourite experiences. The fans were amazing. It felt like home so I love you all for the support.”