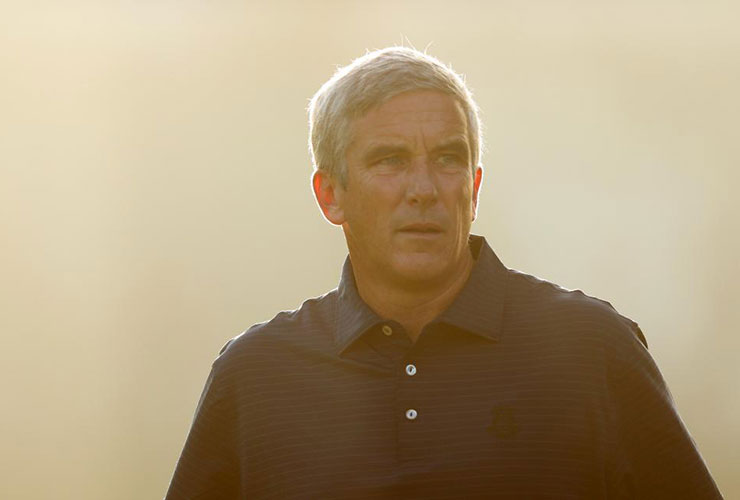 ‘To say everybody supports this would be an exaggeration,’ the commissioner said of the new tour structure. ‘But it’s the right move for the organization.”

It was only a few decades ago that the PGA Tour featured 60 ​exempt ​haves and an ocean of have-nots — hundreds of striving rabbits who went week to week trying to Monday qualify their way into a career.

The dollars are different now, but the vision described by PGA Tour Commissioner Jay Monahan at the Travelers Championship had some of that early 1980s patina. At least in the near term, the tour will do whatever it can to persuade its marquee talent to stay and prevent it from moving to LIV Golf and its payday guarantees, even if that hurts the rank-and-file.

Top players on the PGA Tour stand to get much wealthier, and have fewer competitors to fight through to collect purses at limited-field playoff and post-season events. Instead of 125 players qualifying for the FedEx Cup Playoffs — and, by extension, securing playing privileges for the next season — the new threshold will be 70 players in 2024, competing in three playoff events. A new autumn season will be split into two tracks: The high-dollar reward events for the top-50 players, and a series of events for the players who didn’t make the top 70 to fight it out for status.

If it sounds like life just got tougher for mid-tier players, non-winners and young players trying to break in from the minor leagues, you heard the same thing many players did. “How are Korn Ferry players supposed to get access?” one current tour player who is currently in the 51-to-125 category asked in a conversation with Golf Digest. “They could have increased the purses and just kept the schedule the way it was. The tour is more than just 15 guys.”

Another player currently outside the top 125 said the plan could be an extinction event for many players who had consistently finished in the 75-to-125 range, with so many more players going to war in the shorter span of that autumn status-setting season.

Monahan reiterated that the tour couldn’t compete with LIV Golf’s “irrational” spending spree, and that the heartbeat of the tour would continue to be players who are competing for history on the best pathway for continued access to World Ranking points and the major championship entries they provide. “The environment we’re in is unsettling, and our members want to see their tour grow and evolve. What we’re doing here is a response to the current environment we’re in,” Monahan said. “To say everybody supports this would be an exaggeration, but it’s the right move for the organisation.”

Brooks Koepka’s departure to LIV was officially announced just as Monahan began speaking, but Monahan didn’t announce any other new sanctions for players who left, and he had nothing but tepid platitudes for the departed. “We’re grateful for their contributions to the tour,” he said. “Beyond that, any conversations I’ve had with those should stay private.”

The messaging goal is clear: Emphasise quality of competition over quantity of dollars and throw in enough dollars to keep the best players happy enough.

“Everybody wants to have a situation where the best players in the world are teeing it up in the same tournament together more often,” said Scottie Scheffler, whose strength of schedule includes wins against stacked fields at the Masters, Phoenix and Bay Hill. “That’s what I dreamed about as a kid. Playing against the best in the best tournaments. Playing at Colonial. Playing at Bay Hill.”

McIlroy pulled at that same thread first in Canada and at the US Open last week, saying he was looking to test himself against the best, not the biggest payout. The new plan’s more defined playing window — January to August — would give him the best chance to be fresh for the biggest events. “[The way it is now] players might not want to play more than an event or two in the fall, but then when they get to January, they feel like you’re behind. When the schedule goes to the regular calendar year, you can feel like you can set your schedule the way you want to.”

“All-in” for the tour when it comes to financials shows just how formidable the cash advantage is for LIV. Monahan announced $45 million in purse “enhancements” for next season — or, about half of what LIV reportedly paid Bryson DeChambeau. If a player has a price, LIV can pay it. And even if the new plan works exactly as planned and boosts the take-home for players like Scheffler, McIlroy and Justin Thomas, it mostly means many of the same chips have simply been shifted away from the middle class and those trying to break through from the Korn Ferry Tour or beyond, like Will Zalatoris circa 2020. Siphoning off even some of the flow of young talent to the PGA Tour might not be the biggest threat in 2023, but could do the most to damage the product in 2028. When Gary McCord led the charge to expand the tour from 60 exempt players to 125, he did it because most players didn’t have anywhere else to go.
Now, for the first time, they do.

You may also like:
LIV Golf officially announced the signing of Brooks Koepka
LIV players permitted to play in Open
PGA plans tour series to rival  LIV
LIV Golf announces latest major signing
Brooks Koepka set to make his move to LIV
Report: Ancer is the latest LIV Golf recruit
18 parting thoughts from the US Open
Can you guess the top 10 US Open earners?
The US Open golf needed
Fitzpatrick became a major champion by turning his shortcomings into strengths
Phil admits he wasn’t ready
Watch that leader Morikawa
US Open Day 1 wrap
Rory produces strong start
Meet the US Open amateur hopefuls
US Open: A par 5 unlike any other
The Gulf Club: Latest golf news from UAE