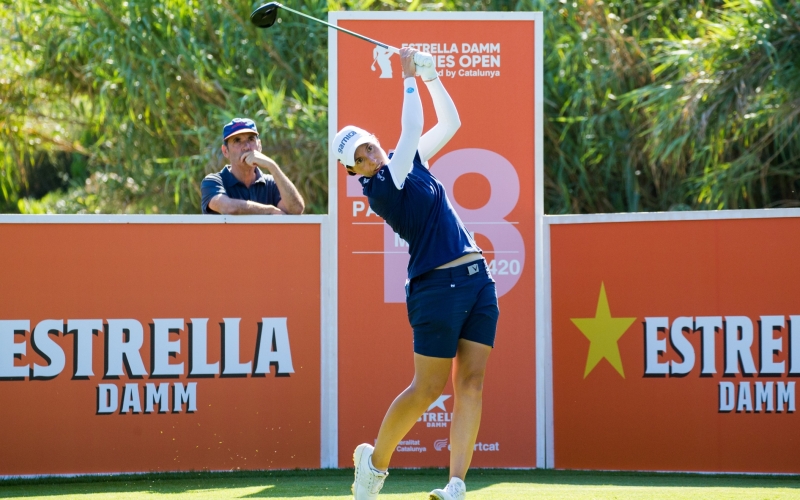 By Matt Smith
Spanish star Carlota Ciganda was right at home in the Estrella Damm Ladies Open at the halfway point, as the 32-year-old from Pamplona rolled in five birdies in a bogey-free second-round of 67 to reach 12-under, a comfy five strokes ahead of Scotland’s Michele Thomson, Sweden’s Maja Stark and Magdalena Simmermacher of Argentina.

If Ciganda can see out the final rounds, the 2012 Ladies European Tour Order of Merit champ, Player of the Year and Rookie of the Year (it was her debut season), will claim her sixth LET title and the first since she won the Andalucía Costa del Sol Open de España last November.

The five-time Solheim Cup player was all smiles at Club de Golf Terramar on Friday. She said: “No bogeys is always a good round and with five birdies. I holed a great putt on No. 1 and had some chances, a good up and down and then on five and six. I made a fantastic putt on nine and two putts on 11. I took advantage of the par five and then a good birdie on 13 and I could have made one more, but I birdied 17 and made a great par on the last, so overall I’m very happy.”

The defending champion, Stark, who played with Ciganda for the first two rounds, matched her 67. “Today was a bit of a struggle as I had four three-putts and I felt like I was playing so poorly, but finally I made some putts at the end. It was fun to play with Emily (Kristine Pedersen) and Carlota,” she said. “I feel like I’ve got to go and hit the gym and hit the putting green, but it was fun.”