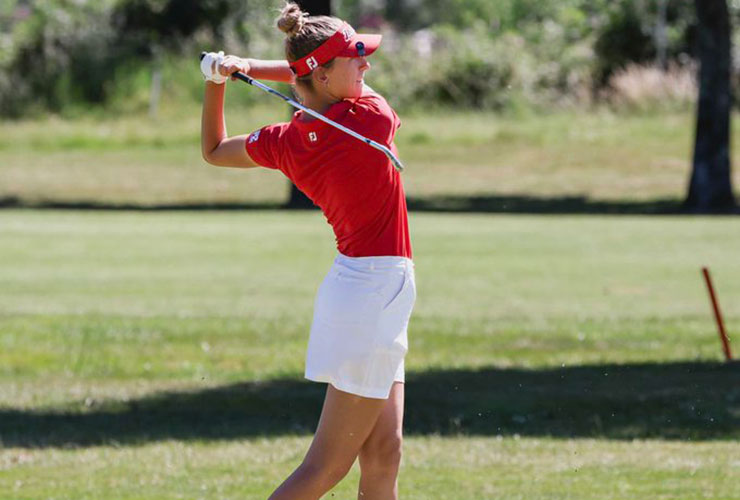 By Matt Smith
Dubai star Chiara Noja will be aiming to consolidate her place at the top of the Ladies European Tour Access Series Order of Merit standings this week at the Trust Golf Links Series – The Musselburgh Golf Club.

The German, who plays out of Jumeirah Golf Estates, finished third in last week’s event at Ramside Hall Golf Club — the first of these back-to-back Trust Golf events.

However, home hopes Tara Mactaggart and Hannah McCook are aiming for some Scottish cheer at Musselburgh, near Edinburgh in the €40,000 tournament.

Five spots for the AIG Women’s Open Final Qualifier will also be up for grabs and the top two players from both Trust Golf Links Series events will receive an invitation to the Trust Golf Women’s Scottish Open.

Mactaggart finished T6 at Ramside Hall GC and relishes the opportunity to compete even closer to her home.

“I’ve never actually played a professional event in Scotland so I’m really looking forward to the challenge ahead. Having support from home this week will be very exciting.

“I think this is one of the best parkland courses in the area and if the wind gets up it’s gonna be a tough test because some of the tee shots are quite tight,” Mactaggart and McCook share more than just the same flag next to their names as they both played golf together at the University of Stirling.

“We’ve been great friends ever since we were probably 11 years old and to go through the ranks of the Scottish golf teams, play university golf together, and to now be up there on LETAS is really amazing,” said Mactaggart.

Aberdeen native McCook is equally excited to play in Scotland as it can put her in a comfortable situation while on the chase after the top six ranking by the end of the season which will secure a full LET card for 2023.

She said: “It feels nice to play at home, I haven’t played a solely female pro event here yet so to finally have the chance is great.

“I have played so many golf courses around this area so I’m sure it will be nice. I guess just having the surroundings of home will be good for me this week.”